PRESIDENT Andrej Kiska experienced firsthand lunch in a reform school, following reports of malnutrition of children in such institutions around the country. 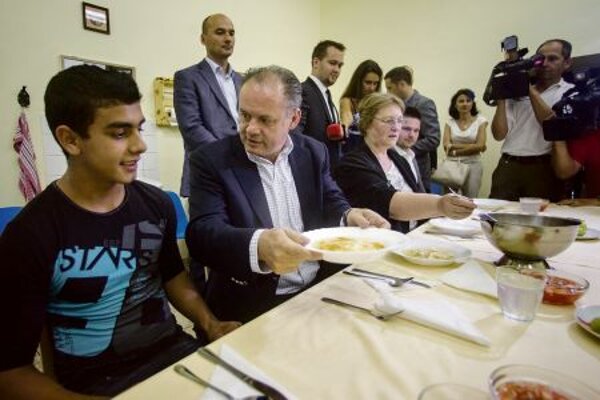 PRESIDENT Andrej Kiska experienced firsthand lunch in a reform school, following reports of malnutrition of children in such institutions around the country.

On August 5, Kiska met Ombudswoman Jana Dubovcová, who has repeatedly pointed to the insufficient portions and nutritious value of the food in state-run reformatories over the past months, in the reform school in Hlohovec, which usually houses up to 40 children. However, only four of the boys joined the president and the ombudswoman for lunch that day, as most of the children are on summer holiday this time of year.

Hlohovec’s reform school was one of the examples cited by Dubovcová in her report, which she presented to MPs in the education committee in May when she first noted that children in reform schools and boarding schools suffer from malnutrition. To demonstrate that state financing of food for children in these facilities is insufficient, she brought a sample of the daily menu to the MPs of the committee. According to the report, breakfast for children aged 6-11 in these facilities costs €0.33, while a whole-day meal costs €2.28 per day. The food for 18 year olds costs more: €2.69 per day.

The August 5 lunch menu in Hlohovec was planned in advance and reportedly had not been changed for the visit of the head of state. The president and the ombudswoman ate vegetable soup, a dish of pork chop and potatoes and a vegetable salad.

“I’m glad we haven’t met in the palace, but in a place where the problems really are,” Kiska said, as quoted by the Sme daily.

“If the president, the ombudswoman, and the ministries combine their efforts, we can make a fundamental turn in the protection of human rights,” she said, as quoted by Sme.

“The work of the ombudswoman and her proposals should be understood as important impulses to make the state work better and to increase people’s trust in it,” Kiska said following the lunch.

On August 4, Education Minister Peter Pellegrini promised that the daily contribution of food for children in reform schools will increase by 20 percent to €3.6 after he met with Dubovcová.

“I am glad for this step and that we could reach it,” Dubovcová said, as quoted by the SITA newswire. “We visit centres to make inspections repeatedly, so we will see how this turns out.”

The change will become effective on September 1 and will cost from €100,000 to €200,000, which will come out of the current Education Ministry’s budget, according to Pellegrini.

Earlier still, the General Prosecutor’s Office also got involved in the situation regarding reform schools back in May, when General Prosecutor Jaromír Čižnár decided to launch an investigation into the matter. Čižnár read the ombudswoman’s report and decided that her findings regarding the alleged violation of fundamental human rights and freedoms in several reform centres and boarding schools will be subject to special scrutiny by the prosecution, spokesperson of the General Prosecutor’s Office Andrea Predajňová said, as cited by the TASR newswire.