AFTER exiting the EU’s excessive deficit procedure some months ago, Slovakia has received more good news. Rating agency Standard & Poor’s revised its outlook for Slovakia to ‘positive’ from ‘stable’. At the same time, it affirmed its ‘A/A-1’ long- and short-term foreign and local currency sovereign credit ratings for Slovakia. Such ratings are important for the interest rates at which the country borrows money. A positive outlook equals cheaper loans and thus budgetary savings. 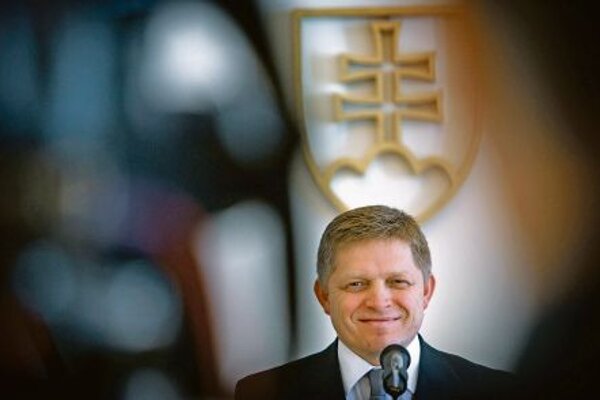 AFTER exiting the EU’s excessive deficit procedure some months ago, Slovakia has received more good news. Rating agency Standard & Poor’s revised its outlook for Slovakia to ‘positive’ from ‘stable’. At the same time, it affirmed its ‘A/A-1’ long- and short-term foreign and local currency sovereign credit ratings for Slovakia. Such ratings are important for the interest rates at which the country borrows money. A positive outlook equals cheaper loans and thus budgetary savings.

“The assessment confirms that the steps of the Slovak government, which we have carried out in 2012, 2013 and 2014, were correct,” said Prime Minister Robert Fico, as cited by the TASR newswire. “Thus, today we can assert that this international rating agency confirmed its ratings of Slovakia at the level A. But what is important is that the agency changed the outlook from stable to positive. It even expects the probability of raising the ratings themselves.”

Kamil Boroš, analyst with X-Trade Brokers, told the TA3 news channel that the problems of the eurozone have receded while Slovakia’s public finance deficits are lower than they were in the past and economic growth is also higher.

The outlook revision reflects S&P’s view that Slovakia’s fiscal consolidation will be aided by more balanced economic growth and particularly a continuing strengthening of tax-rich domestic demand. In its opinion, this reduces the risks posed to the sustainability of deficit reduction as Slovak policymakers will come to rely less on unconventional one-off measures.

“The ratings on Slovakia reflect our view of its moderate government debt burden, the economy’s robust growth prospects and low net external debt,” S&P writes in its press release. “We believe these strengths are offset by economic challenges including high structural and youth unemployment, as well as low income levels and labour activity rates, where Slovakia lags behind its eurozone peers.”

The rating agency further wrote that although the Slovak economy slowed last year, domestic demand started to strengthen from late 2013. Private consumption, which had contracted since the country’s 2009 export-led recovery, was supported by positive labour market changes.

“We expect domestic demand to strengthen further in 2014-2017, raising our forecast of average annual GDP growth over this period to 2.8 percent,” the rating agency wrote. “In our opinion, these trends will bode well for government revenue-intake and debt metrics. Policymakers’ efforts since 2009, including some unconventional revenue-side measures, enabled a reduction of the general government deficit to below 3 percent of GDP in 2013, allowing Slovakia to exit the EU’s excessive deficit procedure.”

S&P believes that the government will continue to target successively lower deficits over its remaining term to prevent a breach of its own debt rules.

“This will entail expenditure restraint and a continuation of measures aimed at improving tax collection and reducing tax evasion and fraud,” wrote S&P, adding that despite a drop in popularity, also evidenced by Fico’s defeat in the presidential election, they expect Smer’s parliamentary majority will achieve its fiscal targets relatively unhindered until general elections are held in 2016.

S&P projects general government debt to peak just below 54 percent of GDP in 2015. It anticipates that the government is likely to use part of its cash reserves (5.9 percent of 2013 GDP) for debt reduction.

“In our calculation of general government debt, we exclude guarantees extended to the European Financial Stability Facility (EFSF) amounting to about 2.7 percent of Slovakia’s 2013 GDP,” the rating agency wrote. “Risks to our assumption could manifest as a pre-election loosening of the fiscal stance.”

“The positive outlook indicates a one-in-three probability that we will raise the ratings over the next two years if fiscal consolidation leads to a faster-than-anticipated decline in borrowing needs or lower debt servicing costs,” S&P wrote. “We could also raise the ratings if reforms to address supply-side constraints, such as in the labour market, augment the country’s growth potential relative to peers in its income group…. We could revise the outlook to stable if general government net debt levels rise above our current expectations, possibly as a result of pre-election spending, or if economic growth underperforms our projections.”

S&P’s upgrade scenarios exclude any potential external shock resulting from an EU-imposition of trade sanctions against Russia, on which Slovakia depends for its energy supply.

Fico, in his response to the revision, also pointed to potential risks related to sanctions on Russia.

“We should realise that large countries like Germany, Poland, France and others, which have large economic contacts with Russia are counting today what impacts the sanctions might have on the economic growth and economy within the so-called third wave,” said Fico.

Fico does not expect any direct impacts on Slovakia and “one should hope that the boomerang, which will fly back to the EU will not harm the economic growth of the biggest players, like France and Germany, in a way that also impacts Slovakia in the future.”