WHEN preparing for his diplomatic mission to Slovakia while still in Tokyo, Akio Egawa came across the name of Major Theodor Edler von Lerch, the Austro-Hungarian soldier who brought skiing to Japan. “I think in Slovakia not many people know this name, but in Japan, Edler von Lerch, born in Bratislava, is considered to be the father of skiing, as he introduced skiing to Japan more than 100 years ago,” said Japanese Ambassador Egawa in an interview with The Slovak Spectator, which covered a number of aspects of Slovak and Japanese links. 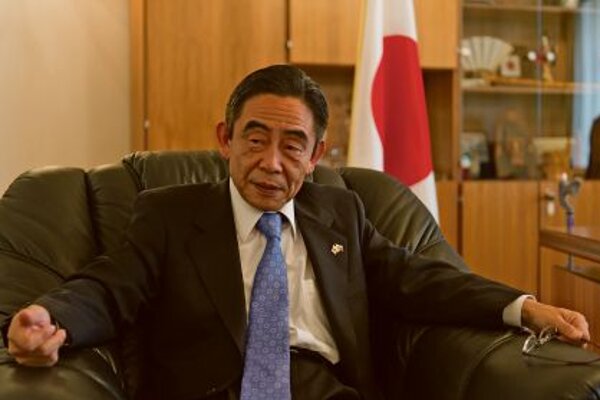 WHEN preparing for his diplomatic mission to Slovakia while still in Tokyo, Akio Egawa came across the name of Major Theodor Edler von Lerch, the Austro-Hungarian soldier who brought skiing to Japan. “I think in Slovakia not many people know this name, but in Japan, Edler von Lerch, born in Bratislava, is considered to be the father of skiing, as he introduced skiing to Japan more than 100 years ago,” said Japanese Ambassador Egawa in an interview with The Slovak Spectator, which covered a number of aspects of Slovak and Japanese links.

The Slovak Spectator spoke to Ambassador Egawa about cooperation between Japan and the Visegrad Group, the challenges of an aging society, Japan’s attitude toward nuclear power, investment potential and Slovaks’ passion for Japanese culture.

The Slovak Spectator (TSS): Japan has been interested in cooperating more intensely with countries of the Visegrad Group (V4). What areas of the economy are specifically of interest to Japan when it comes to cooperation with the V4? Slovakia took over the V4 chairmanship as of July 1. Will this occasion bring any special events, projects or more intensified links?
Akio Egawa (AE): Japan has had good cooperation with the V4 for more than 10 years. While bilateral relations are very important, we also see additional benefits from cooperating with the V4 as a group. We also think that the V4 can find, too, additional benefits in cooperating with Japan as a group. Last year there was the first summit of the V4 plus Japan. Five prime ministers meeting in Warsaw expressed interest in promoting cooperation in three areas, with the first being energy, including nuclear power, what is called “clean coal technology”, energy efficiency, as well as renewable energy. The second area is trade and investment, as well as promotion of small and medium-sized enterprises, while the third area is science, technology and innovation. We will focus on these areas in the future. There has already been some progress in the field of science and technology: last year, we held a seminar on advanced materials in Smolenice, Slovakia, within the framework of the V4 plus Japan.

The Japan Science & Technology Agency, a governmental organisation in Japan, cooperates with the national academies of sciences in each V4 member state to promote cooperation in the sphere of science and technology.

Also last year, the prime ministers agreed to designate 2014 as the V4-Japan exchange year, meaning that we are organising numerous exchange activities, mostly in the sphere of culture. For example, there is a Japanese doll exhibition in the Slovak National Museum during the months of July and August. In September, the Slovak Philharmonic will feature a noted Japanese violinist, Yoe Miyazaki, in Bratislava. October will be the Japanese Cultural Month in Slovakia, which will, among others, feature a demonstration of Japanese cuisine or cooking, Japanese film screenings and a traditional Japanese dance performance. In November, we will be featuring a Japanese film festival as well as a performance of dance with puppets.

TSS: Japan is the world’s oldest society, with 25 percent of the Japanese being older than 65, according to press reports. However, a recent article by the Financial Times pointed out that the Japanese also work longer and stay healthier. How has Japan managed to address the issue of an aging population, also in terms of public finances?
AE: The percentage of people over 65 years has already reached 25 percent in Japan, while it is estimated that in 2060, the percentage will be 40 percent. The ratio of people 65 years and older and people between 15 and 64 will be 1 to 1.3 by 2060. That means 1.3 working, active population have to support 1 aged person. So this is a very serious social and economic problem. There won’t be any easy solution to this development, but our government has been taking many various comprehensive measures. We have, for instance, enacted a basic law to cope with the aging society. One of the important areas is medical care, thus we have been trying to improve the medical health system especially for aged people. We also need to address the welfare system, while some measures have already been taken. For example, the retirement age has been shifting in Japan towards 65 years. It is also important to have more women in the workforce, as compared to other countries Japan has had a lower share of working women. The government is now taking steps to have more women in the
workforce.

An aged society is not a 100-percent negative thing, of course. In one way, there’ll be larger economic opportunities in certain fields. Aged people have their specific needs in the field of medical care, and here there will be bigger opportunities, for instance, for producers of medical equipment. We want to seize those opportunities.

TSS: After the Fukushima disaster, Japan actually managed to replace part of its nuclear energy with energy efficiency measures. Could you specify some of these measures?
AE: Even before the Fukushima disaster in 2011, Japan had been trying to work towards an energy-efficient economy, for example, in terms of buildings and housing. Now we are intensively focusing on zero-emission houses, buildings and technology, which more efficiently uses energy in the housing sector. Just to mention another initiative, the ‘cool biz’ is when people in offices change their clothing habits during the summer months: we encourage them to dress lightly. Even the prime minister and ministers wore just shorts sleeves during the summer months, no suits.

TSS: At a recent meeting between EU representatives and Japan, Japanese Prime Minister Shinzo Abe pledged to accelerate talks on a free trade agreement. What will be the biggest benefits for Japan from this agreement? What benefits, in your opinion, might the free trade agreement bring to Slovaks? How do you perceive the concerns of Slovakia’s automotive industry regarding such an agreement with Japan?
AE: The Japanese government strongly believes that the proposed Japan-EU economic partnership agreement will contribute to both sides in terms of boosting trade and investment, creation of new jobs and strengthening the competitiveness of enterprises, and overall, we believe it will promote further economic growth of Japan and EU countries. The agreement will also promote Japanese companies coming to Europe to do business. Slovakia, as a member of the EU, will also benefit from this.

As far as the automotive industry is concerned, I will give you a very good example: last year, car sales in Japan were almost at the same level as the previous year, but sales of imported cars jumped by 16 percent over the previous year. Foreign-made cars, including cars made in Slovakia, are really popular in Japan. I don’t think that foreign or European carmakers should be worried.

TSS: In your opinion, has the potential of Japanese investments in Slovakia, as well as cooperation in the area of business, been fully explored? What areas of the country’s economy are promising for further cooperation?
AE: There is already sizable direct Japanese investment in Slovakia. Currently, we have around 50 Japanese companies doing business here and I believe there are further options for Japanese businesses to come here to do business. So far, Japanese companies are present mostly in electronics and automotive-related industry. But I see opportunities in the field of information technology or transport infrastructure, or even nuclear power-related industry. There is good cooperation between Slovakia’s SARIO and the Japanese JETRO, the Japan External Trade Organisation. They have a good relationship and they basically want to promote further Japanese companies’ direct investment in Slovakia.

TSS: Despite the remoteness of the two countries, Japanese culture is quite well received in Slovakia. How do you assess the response of Slovak audiences to presentations of Japanese culture? Do you think that Slovaks and Japanese know about each other enough?
AE: When I came here, I was surprised to find that Japanese culture is quite popular among Slovak people, but of course, I think there is still a lot of room for better understanding each other. Culture is an important tool for achieving this goal. Traditional Japanese culture resonates well; however, modern forms of culture and entertainment are gaining ground as well: every year, there is the Anime Show in Bratislava, as well as the so-called Comics Salon, while the Japanese are quite advanced in this area. These events are quite popular, especially among younger people in Slovakia.

Japanese food is also quite popular among Slovaks, as well as the Japanese traditional alcohol, sake, which is gaining popularity. I also was very impressed to find out that Japanese martial arts, like karate or judo, are popular here. For instance, I visited Kolárovo, a place near Komárno, which celebrated the 40th anniversary of judo there. We have other bonds, too, connecting our two nations that may not be well known: in the Slovak National Theatre’s ballet, there are six Japanese ballet dancers. I was surprised myself and I believe they are good performers. As for the area of sports, I am afraid not many Japanese know that the Japanese national canoe team comes to practice in Slovakia every year with a Slovak coach.

TSS: You arrived in Slovakia only in November last year. What are some of your major observations, either positive or negative? Have you observed anything in Slovakia you had not expected?
AE: I have been very much impressed by the dynamic development happening in this country. They say it’s a ‘Little Big Country’, but I would say ‘Old and New Country’ as well, because Slovakia and Bratislava have a rich history, but also very recent things are being created here. I also was impressed that on public buses when an aged person comes on board, people suddenly get up and instantly offer the seat to the elderly or disabled. Literally everyone stands up. In Japan, many try to be kind to the elderly or the disabled, but it’s not as instant as here. This was a pleasant surprise.