SLOVAK is not an easy language to learn, nor is it among the world’s most frequently used languages. However, people of various nationalities spend their summer vacations learning it – and some come back for more the following year. 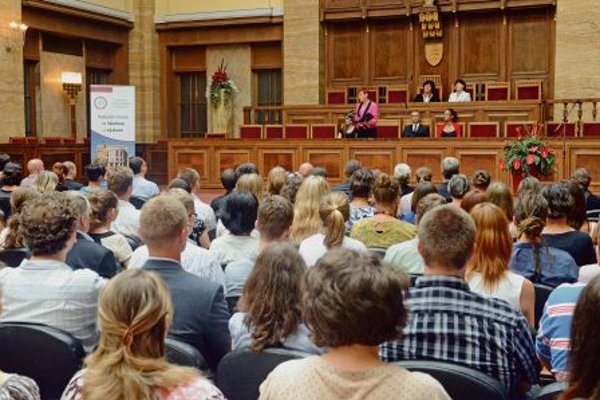 SLOVAK is not an easy language to learn, nor is it among the world’s most frequently used languages. However, people of various nationalities spend their summer vacations learning it – and some come back for more the following year.

The Studia Academica Slovaca (SAS) has been organising the summer school of Slovak language at the Philosophical Faculty of Comenius University in Bratislava for 50 years, having taught around 6,100 people from 76 countries worldwide. In August 2014, 180 students from 38 countries have come to study the language and the culture. The programme also offers “interactive experience events” like trips and “creative workshops” focused on photography, film, theatre, dance and music.

A history professor from the US specialising in Slovak culture and traditions is this year’s oldest participant, at 69 years of age, the TASR newswire wrote. The youngest is 18 and comes from Russia. Other students this year come from neighbouring countries like Poland and Austria, as well as more distant places like Vietnam, Turkey, Argentina, Egypt, China and Cuba.

Most of them, however, come from Germany, head of SAS Jana Pekarovičová said, adding that most of the students who pay for the programme themselves attend for professional reasons, like giving lectures or doing business in Slovakia. Another big group consists of family members of Slovaks.

Students of Slovak or Slavic studies at foreign universities make up the biggest group of those sent to the summer programme on scholarships. Pekarovičová said that over the years, the second group, which decades ago also included professors, cultural organisers, writers, editors and journalists, has shrunk to the benefit of the former. A course for translators and interpreters is part of the summer school, with one of the interpreters attending despite being pregnant.

The schedule, at least six hours daily, differs according to the level of mastery of the Slovak language. Students are divided into three groups and attend lectures on a range of topics, like political science, literature and history, as well as interactive seminars and workshops. There are also evening events, like a traditional Slovak dinner in Rusovce, and trips to places like Banská Štiavnica, Skalica, Bojnice Castle and Modra.

Teaching methods have become more interactive and open, thanks to online connections and more flexible forms of communication. Pekarovičová gave an example of learning language via the lyrics of folklore and modern pop songs.

Some students return, like Gyorgy Rágyanszki, an ethnic Slovak from Hungary who told TASR that this year is his fourth time, as he enjoys Bratislava’s atmosphere as well as the course itself. He has been learning Slovak since nursery school and now studies Slovak language and literature at Budapest University.

Michael Kopanic, the oldest participant, is here for the third time. Khalid El Biltagi, who lectures in the Czech language at a university in Cairo and translates Slovak literature into Arabic, is also present.

During the course, which lasts this year from August 3 to 23, an exhibition marking the 50-year history of Studia Academica Slovaca is on display in the atrium of the Philosophical Faculty on Gondova 2. At the end of the course, participants will receive a diploma and enjoy a festive graduation ceremony, after which they will take away fond memories and perhaps even return for the programme’s 51st year.