THOUGH planned as a retrospective of the work of Czech artist Jiří Načeradský, it turned out to be his first posthumous exhibition in Slovakia when it opened in June at the Danubiana Meulensteen Art Museum. 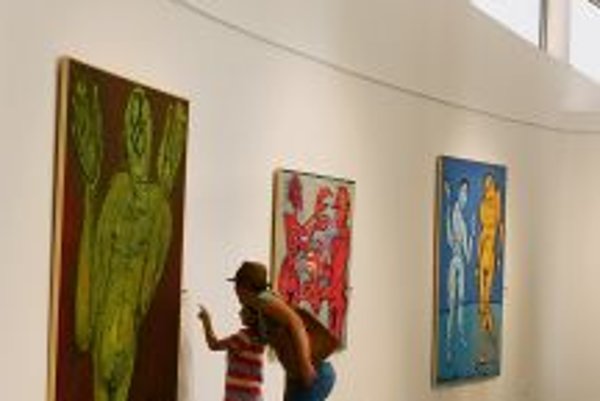 THOUGH planned as a retrospective of the work of Czech artist Jiří Načeradský, it turned out to be his first posthumous exhibition in Slovakia when it opened in June at the Danubiana Meulensteen Art Museum.

Načeradský, a Czech figurative painter, died on April 16, 2014, aged 74, of pancreatic illness. This fact cast a shadow on the otherwise eagerly anticipated opening, which also marked the first presentation to the public of the reconstructed gallery.

All 110 of the artist’s works in the exhibition come from the collection of Ivan Melicherčík, who admitted that although he knew Načeradský personally for only three years, he had come to admire him “as the forerunner who left the peloton of Czech artists behind, [and] who probably didn’t know himself how close the finishing line already was.” The collector, moved to tears, said that he missed Načeradský, even personally, but he can see the artist’s face in his paintings.

After Načeradský returned to Czechoslovakia from a grant residence in Paris from 1968-69, the period of ‘normalisation’ following the clamping down on the Prague Spring meant tough times in both political and artistic spheres. The artist became a political outsider, making a living by reconstructing historical buildings, the Pravda daily wrote. After 20 years, he finally had his first exhibition in 1990 in Prague’s Old Town Hall.

After the turbulent changes following the fall of the Communism regime, he became the head of the Studio of Figural and Monumental Painting at the Academy of Fine Arts in Prague, but was forced to leave in 1992.

He was often described as a loner, an artist outside the official community and the artistic lobbies. He admired the works of Hals, Velázquez, Titian, Matisse and Picasso, and he also found inspiration in comics. Načeradský rejected the notion that at the dawn of the 21st century, painting had ended, and considered painting an inseparable part of contemporary visual art.

The 110 pieces shown in the Danubiana span his career from the 1960s until recent years. Melicherčík said he started collecting them in the 1980s, and even sold some of his other artwork to be able to buy Načeradský’s paintings. The airy, spacious gallery is a fitting venue for the exhibition, and allows the viewer to understand what made Načeradský stand out: the paintings are large in scale, with bold colours, and many could be described as slightly unnerving. You either like them a lot or dislike them, but it is difficult to see them and remain unmoved.

Some exhibit a playful sense of humour, and others even a touch of misogyny or misanthropy, with impressive dark figures elbowing and threatening one another, but also complementing one another and creating a sort of tension that stays with the viewer long after leaving.

The exhibition in the Danubiana, on an artificial island in Čunovo near Bratislava, can be visited Tuesdays through Sundays between 10:00 and 20:00, until August 31. Admission is €3-€6 and more detailed information can be obtained at 02/6252-8501; or www.danubiana.sk.