SINCE 1995, the central-Slovak municipality of Turecká has hosted a festival to celebrate Slovakia’s national dish, bryndzové halušky (potato dumplings with bryndza sheep cheese and bacon). 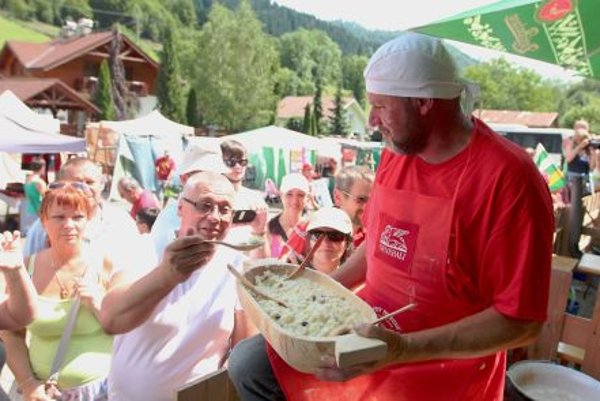 SINCE 1995, the central-Slovak municipality of Turecká has hosted a festival to celebrate Slovakia’s national dish, bryndzové halušky (potato dumplings with bryndza sheep cheese and bacon).

This year, the festival in the village in the Veľká Fatra Mountains, in Banská Bystrica Region, took place on July 19-20. Turecká mayor Ivan Janovec told the TASR newswire that at least 5,000 people attended the event.

“The jubilee 20th annual Slovak and European Championships in Cooking and Eating of Bryndzové Halušky exceeded our expectations,” Janovec said. “Those who weren’t here to experience it certainly won’t believe what they missed,” he concluded.

The contests were divided into two categories with a total of 13 four-member teams taking part. The first competition, which involved cooking and eating three kilograms of brydzové halušky as quickly as possible, was won by the team Župkovskí Jedáci (Trenchermen from Župkov), who cooked the dish in less than 23 minutes and consumed it in less than 47 seconds.

The other competition, entitled Thousand Tastes of Halušky, focused more on the quality and flavour of the dish. The competitors were allowed to use ingredients according to their own taste, such as cabbage, eggs and cottage cheese. A team of housewives called the Majorettes won the contest, ahead of the London Team, which featured an actual Englishman.

The festival’s amtosphere was enhanced with concerts, with performances from folklore ensembles and Czech-Slovak cover band New Age Of Smokie, among others. The FEST Halušky Turecká also offered traditional crafts and numerous other attractions, the SITA newswire wrote.