Nearly 80 firefighters were dispatched in response to a storm with torrential rain that hit Bratislava on August 3. 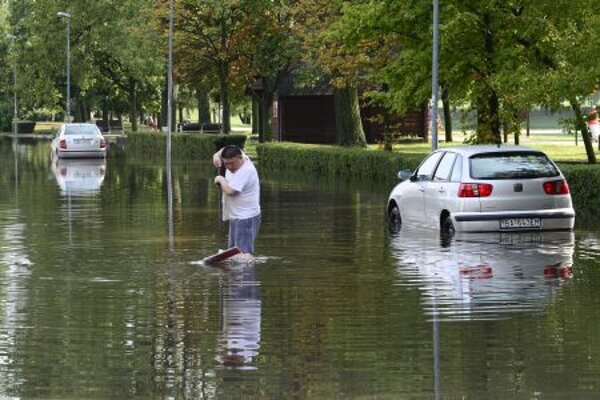 Nearly 80 firefighters were dispatched in response to a storm with torrential rain that hit Bratislava on August 3.

Pavel Ihnát of the Fire and Rescue Corps Presidium (HaZZ) said that 51 HaZZ members were called out to help with storm-related emergencies, along with 28 members of voluntary fire brigades. The crews drained water that had accumulated on roads and underpasses and in cellars of homes.

According to Ihnát, the fire brigade had to intervene in all of the capital’s boroughs. The Bratislava city police warned that a number of roads were closed from flooding.

“The Bratislava region Transport Inspectorate warns drivers that due to the storm and excess water, several underpasses – under the Prístavny Most (Harbour Bridge), the Bajkalská-Prievozská intersection, Gagarinova Street, the Bajkalská-Ružinovská intersection and Račianska Street – are impassable” police spokesperson Karina Považanová told the TASR newswire, adding that police patrols had to divert traffic in all affected areas.

The intense rainfall also caused problems with the city’s public transport, though “the situation in the centre was stabilised by the evening”, according to city transport spokesperson Adriana Volfová. “City-wide transport wasn’t running according to the timetable, however. Trams and trolleybuses were not driving to the Dolné Hony area in the Bratislava boroughs of Vrakuňa and Podunajské Biskupice.”

The next day, insurance companies confirmed damages in the capital caused by the storm amounting to hundreds of thousands of euros. The damage mostly consisted of flooded cellars, garages and sewage systems, as well as a roof and an electric power transformer struck by lightning. No casualties were reported.