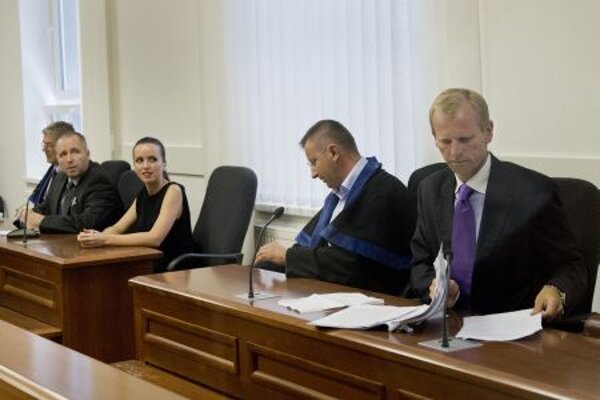 “The announced verdict of the Specialised Criminal Court’s judge proves that corruption has penetrated the highest levels in our society,” said a prosecutor of the Office of the Special Prosecutor, after the verdict was announced, as quoted by the SITA newswire, adding that from the course of the trial it must be evident to all that “proving corruption at these highest levels is extraordinarily difficult and demanding”.

Novotný, an external advisor for investments to former prime minister Iveta Radičová, and Igor Líška stand accused of having accepted a bribe of €30,000 for arranging a subsidy worth €300,000 for the completion of the Osrblie biathlon centre. Líška was detained by police in July 2011 when he was caught accepting marked banknotes worth €30,000 at the office of Novotný, who was in the United States at that time. Both Novotný and Líška claim they are innocent.

The investigation, however, has not proved the claims of then-opposition Smer leader and current Prime Minister Robert Fico that graft had never gotten as close to the prime minister as it had in that case, the Sme daily reported.

After the case became public back in 2011, the Government Office explained that external aides had neither decision-making nor any other authorities, and as such they have no impact on decisions about grants. Radičová sued Fico in September 2011 for libel and the district court in Pezinok issued a ruling in May 2013 that ordered Fico to publish an apology in the TASR and SITA newswires at his own expense.

“If something like this had been proven, the charges would have read quite differently and obviously other people would have been involved as well,” the special prosecutor said, as quoted by Sme.

In total, €1.6 million was allotted for the reconstruction and re-furbishing of the National Sports Complex in Osrblie, with €1 million to come from the Education Ministry, €300,000 from the Finance Ministry and the other €300,000 from the prime minister’s financial reserve.
The state attorney now claims that Novotný also promised to arrange an additional €1.3 million subsidy from the Education Ministry, SITA reported.

The bribe was allegedly given by the contractor Peter Kňazík who, according to the police, went by the codename “top client” or “Mr Icicle” and who, according to Sme, admitted during the investigation that Novotný asked for a bribe.

“He did not directly tell me that he wants 10 percent from these sums; he only wrote it on a piece of paper and asked me whether I have understood,” Kňazík confessed in June 2011, based on his testimony, which was obtained by Sme.

The court, however, did not consider Kňazík’s testimony because his status changed from being an accused to a witness and the testimony came from the time when he was still being accused. He refused to testify again.

Kňazík and mediator Pavol Prečuch have already received conditional sentences in the case and the verdicts are valid as they did not appeal.

Líška also testified in court, claiming that even when he saw that the police were arresting the men who brought him the €30,000, he did not think he was doing anything illegal. He thought that it was his payment for consultancy, the agreed upon 10 percent from the €300,000 subsidy, the TASR newswire reported.

The Government Office instantly fired Novotný from his post “due to the loss of trust”, while the subsidy for the project was cut by Radičová. The investigation did not show any involvement by Olympian Anastazia Kuzmina, who had officially requested the subsidy from the prime minister.

Novotný insists that he has not committed a crime.

“We will see what legal opinion the Supreme Court will have,” Novotný said, as quoted by SITA on August 12.

Líška’s lawyer even said that nothing has proved that the money they were discussing over the phone was a bribe, as reported by TASR.

The original verdict in the case, which found four men, Líška, Novotný, Kňazík and Prečuch, in the case guilty, was issued on October 10, 2013 as part of the penalty notice.

The police wiretapped the phones of those involved in the case, monitored them as well as marked the money and observed the cash changing hands. The court also accepted communication between Líška and Novotný over Skype as evidence, Sme reported.

The communication implies that Líška spoke with Novotný over Skype while the latter was in the United States on holiday. He apparently said the “Icicle” will come and bring the “corner stone” and that “30 pigeons will land” and then later “100 pigeons”, Sme quoted Judge Igor Králik as saying.

Líška provided the text of the Skype messages to the police and also admitted that “pigeons” stood for money. However, he insisted that they did not do anything illegal, Sme reported.