Kotleba not invited to SNP celebrations

THE REGION known as the centre of anti-fascist resistance during the Second World War shocked the country by electing a man with a far-right background as its regional governor. Now this paradox comes to light again, when the central-Slovak city of Banská Bystrica is the key venue for celebrating the anniversary of the Slovak National Uprising (SNP). Governor Marian Kotleba, however, is not invited. 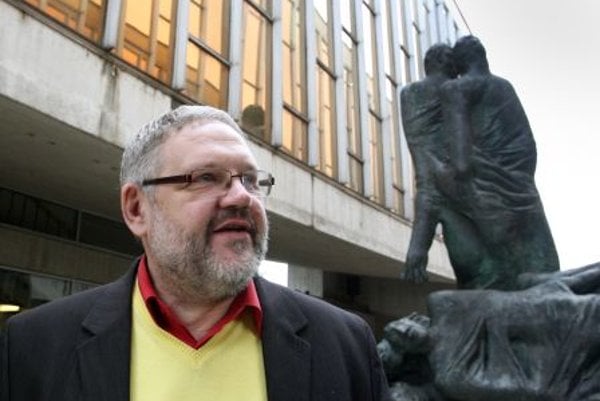 THE REGION known as the centre of anti-fascist resistance during the Second World War shocked the country by electing a man with a far-right background as its regional governor. Now this paradox comes to light again, when the central-Slovak city of Banská Bystrica is the key venue for celebrating the anniversary of the Slovak National Uprising (SNP). Governor Marian Kotleba, however, is not invited.

“I will not invite a fascist to celebrate an anti-fascist uprising - I view it as absurd and disgusting,” said Stanislav Mičev, director of the SNP Museum in Banská Bystrica, the organiser of the 70th anniversary of SNP celebrations, as quoted by the TASR newswire. “This means that if Mr Kotleba will have the stomach to come here to look into the eyes of the SNP’s participants, he may come - but only as a private person.”

Mičev said he does not care that he is violating protocol and claimed that he wants to be mindful of the official guests and other SNP participants at the celebrations.

Kotleba, who has a history as a leader of the political party Slovenská Pospolitosť (Slovak Togetherness), which was dissolved by the 2006 ruling of the Supreme Court, has repeatedly described the SNP as a predominantly communist-led uprising against the state.

“The fact that I’m not invited does not mean I will not come to see it,” Kotleba told the SITA newswire. Kotleba believes the SNP brought an end to the independent Slovak state and therefore finds it a negative development in the country’s history.

The wartime Slovak state is a topic that Kotleba often promotes. Contrary to the generally accepted view that the state was allied with Nazi Germany and as such sent tens of thousands of its citizens to concentration camps and certain death, Kotleba and his party praise the state as the first-ever independent state of Slovaks.

Shortly after his inauguration into the post of the regional governor, Kotleba angered the regional councillors when the regional monthly newspaper, Náš Kraj (Our Region), started echoing his praise of the fascist Slovak state. The regional paper’s lead story in April lauded Kotleba for his “courage for removing the occupant flag of the European Union” from the building of the regional government. Several councillors noted that the monthly was simply turned into a political pamphlet for Kotleba and his party, People’s Party-Our Slovakia (ĽSNS), and many claimed they were personally offended by the article celebrating the wartime Nazi-allied state, citing the participation of their ancestors in the SNP.

To protest Kotleba’s view of the SNP, members of the Banská Bystrica regional council, which Kotleba as governor presides over, signed a joint statement to express their support for the legacy of the anti-fascist uprising.

“Just like [the fighters for freedom] we feel aversion towards fascism, towards totalitarianism as such, and to the servants of the regime that brought so much horror and evil to the world,” the statement, drafted by independent councillor Ľubomír Motyčka, reads.

Motyčka claims that Banská Bystrica and central Slovakia have understood the election of Kotleba was a mistake and “today the situation is different”, he told the Sme daily.

Kotleba’s name has been infamously connected to the SNP celebrations in the past, long before he was elected to his current post.

Back in 2006, Kotleba as the leader of the fascist group Slovenská Pospolitosť (Slovak Togetherness) was arrested with 11 of his supporters at a ceremony to mark the 62nd anniversary of the SNP in Banská Bystrica. Kotleba was detained because he attempted to interrupt the ceremony, the police said at the time.

Kotleba and his supporters attempted to get into the SNP complex shortly after the ceremony began, they said. Group members wore blue T-shirts with inscriptions saying “Slovenská Pospolitosť” and “On Guard”, a greeting used by the Nazi Hlinka Guard during the Second World War in Slovakia. None of those detained were ever charged.