TIT-FOR-TAT sanctions that the European Union and Russia have imposed on one another are senseless and they threaten Slovakia, Slovak Prime Minister Robert Fico said of recent developments on August 9, inviting criticism from members of the opposition and local media. 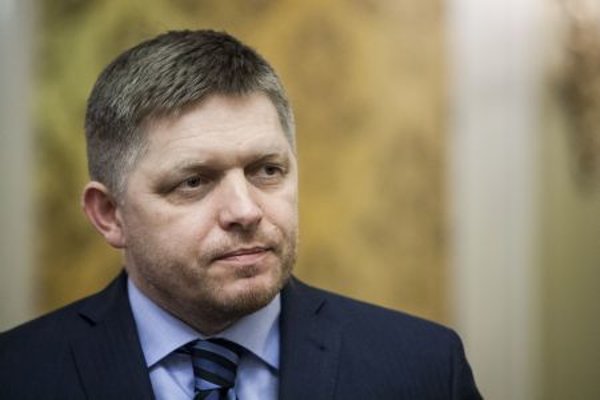 TIT-FOR-TAT sanctions that the European Union and Russia have imposed on one another are senseless and they threaten Slovakia, Slovak Prime Minister Robert Fico said of recent developments on August 9, inviting criticism from members of the opposition and local media.

Just days after the EU followed the United States in passing targeted sanctions against Russia, Moscow imposed a one-year embargo on food imports from the EU, United States, Australia, Canada and Norway on August 7. The Ukrainian parliament passed a law on August 14 to impose sanctions against Russian firms and individuals who support or finance separatists in eastern Ukraine.

“Slovakia is, in my opinion, under threat, because I call these sanctions senseless,” Fico said during a celebration marking the upcoming 70th anniversary of the Slovak National Uprising (SNP) in Lehota pod Vtáčnikom, Trenčín Region, on August 9.

A couple of days later, after meeting with representatives of Slovakia’s major gas utility Slovenský Plynárenský Priemysel (SPP) and pipeline operator Eustream, the prime minister restated his earlier claim that the sanctions are senseless.

“If there is a conflict, it should be addressed by other methods rather than senseless three-sided sanctions, which harm the economies of everyone,” Fico said at a press conference following the meeting, as reported by the SITA newswire.

Fico asked who benefits from a situation where the EU and the Russian Federation are both sinking in terms of economic performance while Ukraine is practically on its knees.

“If there is a problem, let’s solve it,” said Fico. “There are different methods for addressing conflicts.”

As the Sme daily noted, the Slovak government agreed to the sanctions during negotiations led by Slovak Foreign Affairs Minister Miroslav Lajčák. Former foreign affairs minister Eduard Kukan of the Slovak Democratic and Christian Union (SDKÚ) also noted that EU sanctions against Moscow are the result of complicated talks, and Slovakia just like all other member states, agreed to these sanctions.

“If finally such an agreement emerged, let’s fulfil it,” Kukan said, as quoted by Sme.

Fico called for unification across the political spectrum in association with the sanctions, using the SNP as a pretext.

Just as was the case during the SNP in 1942, when everyone stood together united, regardless of whether they were leftists or rightists, so it is necessary now for politicians in the opposition and governing party to unite and protect the interests of Slovakia with respect to the senseless EU sanctions against Russia that endanger the Slovak economy, Fico said back on August 9.

Fico has been expressing concerns that the sanctions might harm Slovakia’s economy for some time now, a point he continued to emphasise. “I’m already dealing with quite current issues that concern specific companies in Slovakia,” he said.

Despite Fico’s appeal, the opposition parties are far from enthusiastic about joining him in condemning the sanctions. The tradition of the SNP is exactly what the sanctions of the EU are directed against: a state that violates the freedom of other nations, said František Šebej, head of the Parliamentary Foreign Affairs Committee and a member of the Most-Híd party.

“If we were to unite around SNP values we would join forces against Russia and not take the role of bootlickers to Putin’s regime,” Šebej added, as quoted by Sme.

Šebej considers Fico’s claim to be the reaction of a man sitting outside the standard values of European policy.

Fico’s statements have angered the opposition, with SDKÚ caucus head Ľudovít Kaník saying that Fico has always behaved like a Russian agent and saboteur in the EU, and called it a leftover from his communist-party career.

Freedom and Solidarity (SaS) leader Richard Sulík called it “a typically perfidious policy of the prime minister when he tries to address part of the Slovak electorate one day, but keeps silent and unnoticeable in Brussels”.

In fact, embassies of EU countries, approached by Sme, refused to comment on Fico’s statements.

The Christian Democratic Movement (KDH), the party which recently helped Smer amend the country’s constitution, said it supports a strong level of sanctions, which are already showing a real impact on the Russian economy.

Fico does have the support of many in his own party. Smer member Ľuboš Blaha said that “the economic war does not bring results and is absurd”. He also suggested that the crash of the aircraft in Iran on August 10 was a consequence of sanctions from all over the world.

“They have not been able to modernise civilian planes for 30 years there and have the highest rate of plane accidents,” Blaha said. “Sanctions fall on innocent people.”

According to Dzurinda, Fico’s statement that he “does not understand Ukraine” is the most telling.

“Fico has for many years been limping on one leg,” Dzurinda said in an interview with Sme on August 12. “I would expect a different stance from a prime minister: making an effort to have good relations with both Russia as well as Ukraine.”

As for Fico’s comment on the “senseless sanctions”, Dzurinda suggested that over the years he has witnessed statements on international politics that were intended for the domestic political environment. The problem, however, is when these statements go against the objective interests of the country, he added.

Dzurinda added that instead of a logical stance, trying to engage in mediating and negotiations between Ukraine and Russia in the conflict, Fico evidently sides with Russia.

Fico, however, responded on August 14 that a politician who agreed with “the flight of NATO bomber planes, which were killing civilians in Serbia”, apparently referring to Dzurinda, should not lecture him.

Fico argued that his government took a clear stance on the developments in Crimea.

“We have very clearly said what we think about the occupation of Crimea,” Fico said, as quoted by SITA, adding that his government said “it was a violation of international law and that we simply disagree with it”.

Before leaving office in mid-June, former Slovak president Ivan Gašparovič sent a letter of invitation in May to Russian President Vladimir Putin to attend the national celebrations of the 70th anniversary of the SNP in Banská Bystrica at the end August. Gašparovič sent his letter only a few weeks before his tenure ended and when his successor, Andrej Kiska, was already elected. Kiska was unaware of the invitation, which was sent out after Russia had invaded Crimea and before the conflict in eastern Ukraine broke out which prompted the EU and the US to impose an initial round of sanctions.

Slovak foreign policy analyst Alexander Duleba opined that he would not invite Putin for any celebration when Russia is considered an aggressor in the conflict in Ukraine, Sme reported.

Yet, the local media also speculated that Russian Prime Minister Dmitry Medvedev may come instead.