IN A time when many cultural institutions, including bigger, well-established ones, are struggling to fill their seats, the Stanica Žilina-Záriečie culture hub is attracting not just local ‘regulars’, but also culture fans from far and wide, and from much bigger cities. 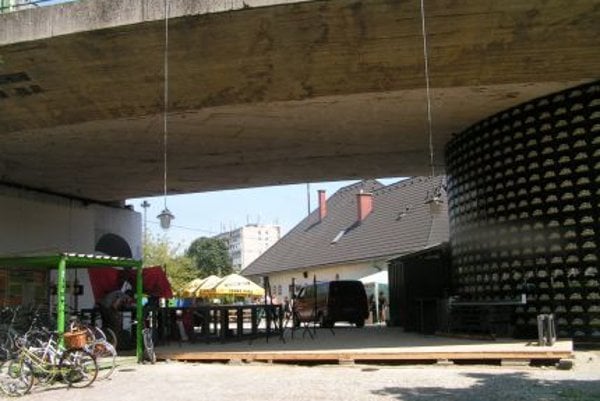 IN A time when many cultural institutions, including bigger, well-established ones, are struggling to fill their seats, the Stanica Žilina-Záriečie culture hub is attracting not just local ‘regulars’, but also culture fans from far and wide, and from much bigger cities.

The multi-genre KioSK festival that took place in late July at Stanica proved to be a success, with its variety of musical, dance and theatre performances, plus two workshops and an award for “light design”, with a “Light Guerrilla – intervention in the urban space”.

The festival, with the theme of ‘Self-Reflection’, featured several artists and companies, consisting of Slovaks (including those living abroad) as well as foreigners, including Peter Šavel & Co, Zuzana Husárová & Ľubomír Panák, Dominika Doniga & Katarína Máliková, Marek Piaček, Martin Talaga, the RootlesRoot Company (Greece), and Pavol Zuštiak & the Palissimo troupe (US).

The Stanica (meaning station) is an actual railway station, although the local train only stops there a few times a day. The complex consists of the station building, an adjacent park and an additional structure built under a viaduct by volunteers out of crates and plastic bottles. The easily accessible accommodation, with camping in the park, contributes to the festival’s atmosphere, which ranks among the culture hub’s biggest events and has grown into one of the most popular multi-genre independent culture festivals in Slovakia.

KioSK 2014 was the seventh year of this event, but its history goes back further.

“We founded a civic association 15-16 years ago,” co-founder and head of Stanica, Marek Adamov, told The Slovak Spectator. “We felt we were not satisfied with the independent, unofficial culture and art on offer, and started creating art ourselves and later organising events for us and our friends.” Adamov added that by 2001-2002 they were fed up with rented rooms and felt that if they were to remain united as a group, they had to find their own premises, so they rented a functioning railway station from the town.

Several years later, the venue proved insufficient for their ever expanding activities, and so volunteers were called in and another, bigger space was built from crates and plastic bottles under a viaduct.

The third and latest expansion is the New Synagogue, a building designed by famous German architect Peter Behrens which served its original purpose for only a few years and was later repurposed for different activities. The Truc Sphérique civic association rented it from the Jewish community and through reconstructions has revived its original appearance, all with the aim of creating a modern art space, or a Kunsthalle. The facility is already being used for some events.

Adamov said that in recent years, Stanica’s focus has shifted from cultural or artistic activities to community meetings, to inspire new activities and support social contacts among people with similar goals and ideas.

As for the audience, “at first they were our friends, but now the core has shifted slightly to younger people in their twenties”, Adamov said. “Our friends already have children, so they tend to come for afternoon programmes with their children.”

The head of Stanica added that some of their visitors prefer a certain genre or art form, but many buy a permanent ticket for one year and come randomly to their events, relying on the taste of the organisers and sometimes only learning about a particular event when they arrive.

Adamov also said that the organisers respect the taste of their audience, but do not fully cater to them, and rather aspire to be a kind of laboratory in which they can experiment with less mainstream genres.

Dancer and choreographer Jaro Viňarský, who held a workshop during KioSK and hosted morning discussions, also cited Stanica’s openness towards collaboration with other centres as key to the group’s success.

“First, these other culture hubs came to Stanica for inspiration,” he opined, adding that now they have created a network of independent culture. Viňarský listed a strong idea (de-centralisation and creating culture in Žilina), the personality of Adamov and the continuity among Stanica’s personnel as the driving forces behind the success.

Choreographer and dancer Pavel Zuštiak, whose work with the Palissimo Company, The Painted Bird II-Amidst, had its Slovak premiere during KioSK 2014, sees the love for art, and the enthusiasm and zeal of the organisers as behind the success and the Stanica’s expansion.

“The people from Stanica work together for the whole week,” he said, “and then they go together for a trip on the weekend; this is something you won’t find anywhere else.” He also added that through arranging demanding, sophisticated events, Stanica has also managed to educate and cultivate its audience.

“Stanica Žilina-Záriečie is a unique space for creating and developing culture in Slovakia,” Piaček explained. “The best thing about workshops with children is that they are not one-time, but rather, they last for several years. Thus, the children who started at 6 now help as teenagers at current workshops with small children.”

He added that also notable is a chamber opera about the split of Czechoslovakia, in which the discussions between the then Czech and Slovak prime ministers in the Brno-base Villa Tugendhat are re-enacted. The opera was initiated by local organisers Marek Adamov and Fedor Blaščák with the Mio-Mio ensemble. Another interesting project was the opera Lord of the Ghosts – Štós, which was a sort of community project involving a brass orchestra and the choir of the Carpathian-German minority of Mantáks from the village of Štós.

Photographer Peter Snadík praised the organising group and opined that although Žilina can never become a global cultural centre due to its smaller size, it can nevertheless create good-quality events and attract likeminded people and perhaps even co-organisers. He admitted, however, that there have also been projects that failed, like attempts to attract minorities – a concept that requires energy from both sides.

Adamov explained that the activists were managers from all different professions, rather than artists, which might explain why they have stayed together for so long.

“We did not have the inner conflict of whether to make our own artistic projects, or whether to invite artists,” he said. “We have always organised events of other artists.”

“We are maybe still somewhere halfway between an institution and a team,” Adamov summed up. “Stanica has been developing along the way, as we grow older and develop. Another thing is that many of us have ventured away, sometimes quite far, but have returned to Žilina over the last 15 years, and have turned to more environmental, social and community activities, striving to change the architectural development of Žilina.” He added that they are still open to new spaces and new activities which could prove viable.

Stanica Žilina-Záriečie collaborates with independent Slovak cultural centres like KC Dunaj and A4 Culture Space in Bratislava, Záhrada (Garden) in Banská Bystrica, Kino Akropola in Kremnica, St Anica in Banská Štiavnica and Tabačka Kulturfabrik in Košice within the Anténa network, and is also part of the TransEuropeHalles network.

Adamov explained that unlike traditional theatres or cultural institutions, the centres of independent culture differ not just according to the size of the town or city and the conditions, but also their various activities. He said that a Dutch centre has hundreds of thousands of visitors and hundreds of employees, while an Italian centre operates solely with volunteers and has a few thousand visitors. In Banská Štiavnica, conditions allow for residencies, while in Bratislava, events for visitors are a priority.

In Berlin, one side activity is the production of photovoltaic energy, while in Italy, they produce olive oil, and Stanica operates an actual railway station, along with the park that provides camping spaces for audience members and participants during festivals and summer events. The centres are closely connected with the community they reside in, and thus a model in one city may not necessarily work somewhere else.

“Currently, we are trying [to see] which activities could be viable for the Kunsthalle, the New Synagogue,” Adamov responded, when asked about what is in store for the future.

But due to the openness and flexibility of Stanica Žilina-Záriečie, it is difficult to predict activities over the long term. But what is certain is that whatever they do will involve interesting, high-quality art, ensuring that culture will remain a staple of this industrial city in northern-central Slovakia.