THE OLD skill of scything is alive and well among participants of the national Grass Cutters’ League, which culminated this year on July 26 in Cigeľ, near Prievidza, in central Slovakia. 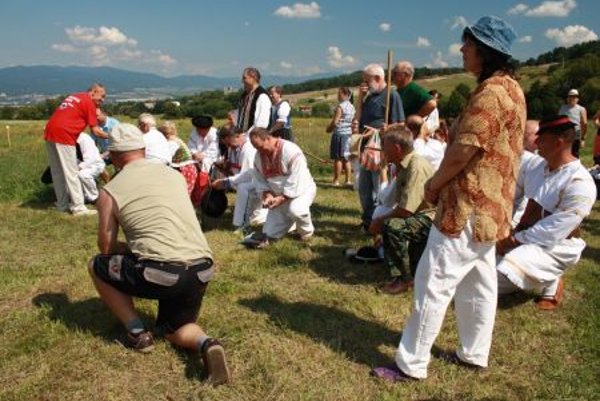 THE OLD skill of scything is alive and well among participants of the national Grass Cutters’ League, which culminated this year on July 26 in Cigeľ, near Prievidza, in central Slovakia.

The four-year-old annual scything competition has already set a world record: in 2011, the global organisation World of Elite Records in India recorded Cigeľ citizen Ján Krausko, aged 92, as the oldest participant in the competition.

“This year, there are five categories: four patronised by the Slovak Grass Cutters’ League [boys under 18 and women have to scythe an area 5m2 in size, while men under and over 60 are responsible for a area 10x5 metres in size], plus the Cigeľ Champion category, which is meant only for people from this locality,” Mjartan explained.

However, last year there were also categories for teams of fathers and sons, fathers and daughters and politicians and mayors. This year, the “scythe 120 cm” and team competitions were also included.

The youngest participant was Monika Kľusková from Hruštín (aged 8), with the oldest being Štefan Wolf from Nová Baňa (81). Participants were asked to scythe as quickly and as skilfully as possible, and referees selected winners in individual categories.

Events for children and a cultural programme including bagpipers and other folklore musicians and troupes rounded out the event.

The competition was part of a project of cross-border cooperation by the Slovak and the Czech Republic Upper-Nitra Folklore Summer.

“We returned to the tradition, to the roots, to grass, to what our ancestors did practically on a daily basis,” Ladislav Mikuš of the civic association Vrchvoda from Cigeľ, which co-organised the Cigeľ Scythe event, told TASR. “Here, exceptional people from all over Slovakia meet, who sacrifice their time, money, energy and free time spent with families. It is an unbelievable team of willing, self-sacrificing people who are able to prepare the grass fields to be scythed, and provide snacks and a nice atmosphere. We do not protest, we only revive folklore, folk costumes and traditions,” he summed up.