CZECH singer Ida Kelarová, in collaboration with the Čhavorenge children’s choir and the Czech Philharmonic orchestra, kicked off a series of three concerts held in Roma settlements and a Jewish synagogue on August 6. 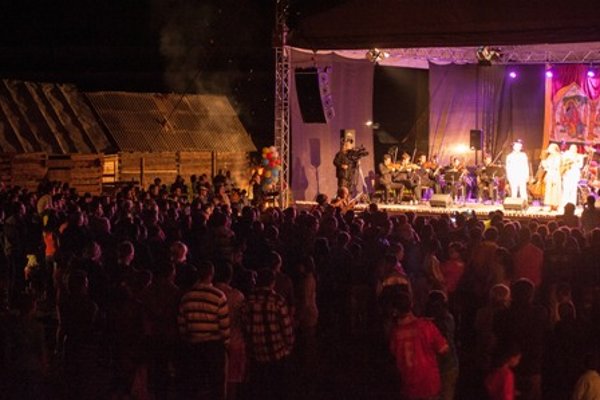 CZECH singer Ida Kelarová, in collaboration with the Čhavorenge children’s choir and the Czech Philharmonic orchestra, kicked off a series of three concerts held in Roma settlements and a Jewish synagogue on August 6.

The first performance took place in the settlement near Lenartov, a village in Prešov Region. During the hour-long concert, a 40-member choir composed of talented children from socially marginalised families performed 10 traditional Roma songs. They were accompanied by the Czech Philharmonic, which performed in front of about 600 Roma free of charge.

The main aim of the concerts, which ended a three-week summer school focused on developing the talents of Czech and Slovak children from poor communities, is to bring attention to the extreme poverty in which many Roma live.

“It was strong, I have never felt something similar before,” said Petr Kadlec, head of the Czech Philharmonic team in Slovakia, as quoted in the press release sent to media. He added that some inhabitants of the village seemed to be in a positive state of shock during the concert.

The series continued on August 7 in Raslavice, also located in Prešov Region, and on August 8 in the synagogue in Liptovský Mikuláš. The organisers had to cancel a concert planned for Rudňany, Košice Region, because of a hepatitis epidemic.

Before the August 6 performance, the Czech Philharmonic arranged workshops for children from the Lenartov school, during which they showed them musical instruments and offered lessons in singing and dancing.

“You see the talents with whom nobody works, they do not know what the music means; they are shy and afraid of showing anything in the beginning,” Kadlec said, as quoted in the press release.

According to Kelarová, it is important to show parents that “children from settlements that have somebody to work with them can, after three weeks, stand on the same stage with the Czech Philharmonic”, as reported in the press release.

Kelarová has been working with talented Roma children from socially disadvantaged families for 16 years. She has been organising similar projects in the Czech Republic, but decided to arrange them in Slovakia, too. She makes a point of highlighting the extreme poverty in the settlements.

“My effort is not only to work with children from settlements, but also to make this problem visible,” the Czech singer said, as quoted in the press release.