Slovak landscapes, past and present

THE BIGGEST exhibition in the Slovak National Gallery (SNG) in 2014 is called Two Landscapes, whose subtitle reads: Picture of Slovakia: 19th Century x The Present Time. As the name suggests, the exhibition juxtaposes two different periods and perceptions of artistic depictions of Slovakia – that of the late 18th and 19th century, in contrast with the late 20th and early 21st century. 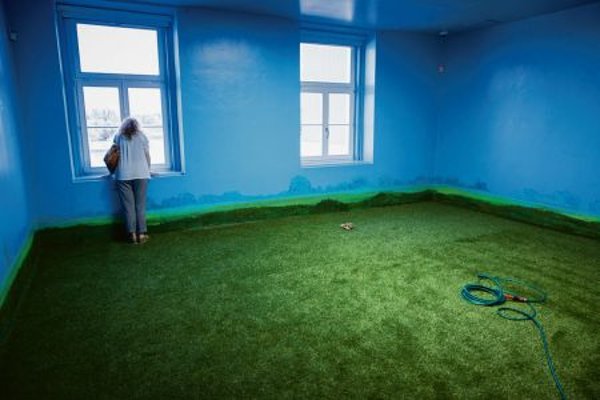 THE BIGGEST exhibition in the Slovak National Gallery (SNG) in 2014 is called Two Landscapes, whose subtitle reads: Picture of Slovakia: 19th Century x The Present Time. As the name suggests, the exhibition juxtaposes two different periods and perceptions of artistic depictions of Slovakia – that of the late 18th and 19th century, in contrast with the late 20th and early 21st century.

The show’s scale can be seen not just in terms of its size (it spans two floors of the SNG’s Esterházy Palace) but also in the number of curators: eight (Martin Čičo and Katarína Bajcurová, the creators of the concept, as well as Lucia Almášiová, Katarína Beňová, Lucia G. Stachová, Petra Hanáková, Aurel Hrabušický and Dušan Buran) and from the fact that it presents more than 400 works of art from 35 various galleries, museums, institutions and private collections.

The first, more traditional section is comprised of work that marks the heyday of landscape painting in the late 18th and early 19th centuries. “At that time, discovering the picturesque became fashio-nable,” curator Čičo said, as quoted by the SITA newswire. He added that in this era artists became interested not only in depicting nature, but also in experiencing nature in person via tours and hiking, a phenomenon seen in all big European cultures, though it developed slightly differently in each country.

The second, contrasting part of the exhibition brings a more individualistic and less derivative approach from artists who have focused on Slovakia since the 1970s, like Ľudovít Fulla, Július Koller, Otis Laubert, Robert Bielik, Emöke Vargová, Štefan Papčo, Juraj Meliš. They express their own, sometimes ironic or critical, perception of their homeland.

“Newer works comment on the old art … and depict the country ironically, contrastingly and cheerfully,” Bajcurová told the TASR newswire. “Apart from photographers who document it more accurately, other artists adjust it to their own [mode of] expression. A strong share of young photographers and other contemporary artists can help visitors get to know current modern art better.”

The extensive exhibition is divided into thematic sections, and techniques and genres also vary, from paintings, drawings, engravings and graphic art, through photographs, statues and objects, to installations, videos, happenings and performances.

“It [the exhibition] shows the span and diversity of depicting the Slovak landscape as a topographically defined place, processed and interpreted as equally well by 19th-century artists as by contemporary creators,” the SNG informed.

The exhibition is accompanied by a 240-page catalogue with a summary in English. Moreover, a leaflet in English is offered at the ticket office. Although the admission is free, tickets are given to count the number of visitors. The exhibition can be seen Tuesdays to Sundays between 10:00 and 18:00 until October 19 in Esterházy Palace in Ľ. Štúra Square on the Danube embankment.

Accompanying events include screenings of films about Slovakia, and on September 18, at 19:00 there will be the Thursday Art Talk: Two Landscapes, Picture of Slovakia: 19th Century, a lecture/debate for English-speakers. The September edition will focus on 19th century art, while the October 16 event will focus on contemporary art. Admission is €3.

“In the 19th century, an artist interpreted the real landscape and configuration of the country; he manipulated the picture only minimally with his feelings,” Čičo told TASR. “While in the 20th century, and especially in contemporary art, various other sub-contexts and contexts enter the artwork. We don’t see the countryside as it looks, but rather as it is perceived by the artist,” he summed up.