TWO sheep-shearing competitions in July offered proof that sheep shearers are working hard to preserve the culture and the necessary skills of their profession. 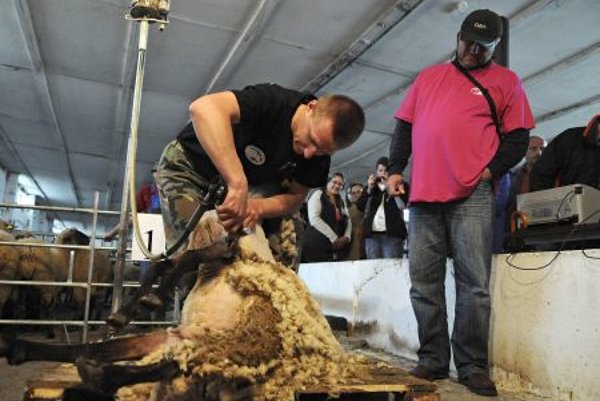 TWO sheep-shearing competitions in July offered proof that sheep shearers are working hard to preserve the culture and the necessary skills of their profession.

A regional sheep-shearing competition took place in the municipality of Kamenica in the Sabinov district in eastern Slovakia in mid July, where a total of eight contestants sheared 148 sheep, with Ján Hankovský from Bardejov, Slavomír Sobek form Ružobmerok and Jozef Hankovský from Bardejov being the winners.

Sobek also won the competition for the fastest shearing, with one minute and 10 seconds for one sheep – lagging only two seconds behind the Slovak record.

The third year of this competition was not as well attended as previous years, Peter Angleovič of the organising farm Farma Kamenica told the TASR newswire. But poor weather and various work-related obligations in the high season might have prevented some sheep shearers from participating.

Those who made it to the finals in Kamenica automatically proceeded to the national round of the competition.

“We’ve witnessed high-quality performances from 13 professionals from Slovakia, Poland and the Czech Republic,” Slavomír Reľovský, head of the Slovak Union of Sheep and Goat Breeders, told TASR. “This is also proven by the fact that the best Slovak, Peter Kučera, broke the Slovak speed record in sheep shearing.”

Reľovský also noted that after a period of some decline, the profession of sheep shearing is experiencing somewhat of a revival. “Aside from the fact that sheep need to be sheared, we’re noticing increasing demand for products made of high-quality sheep’s wool. We need more young sheep shearers,” he said.

At the same time, however, he praised the talents shown by the competition’s youngest entrant. “The youngest participant, 20-year-old Marek Marko of Valaská, demonstrated undeniable talent, and happens to be a student at the Slovak Agricultural University in Nitra. What’s especially valuable is that he received the evaluation of the contestant with the highest-quality and slickest shearing,” Reľovský concluded.