BRATISLAVA’S TROLLEYBUSES have celebrated their 105th birthday. On July 19, 1909, inhabitants and visitors of the city (then called Prešporok in Slovak, Pressburg in German and Pozsony in Hungarian) witnessed the festive launch of the city’s first trolleybus line. 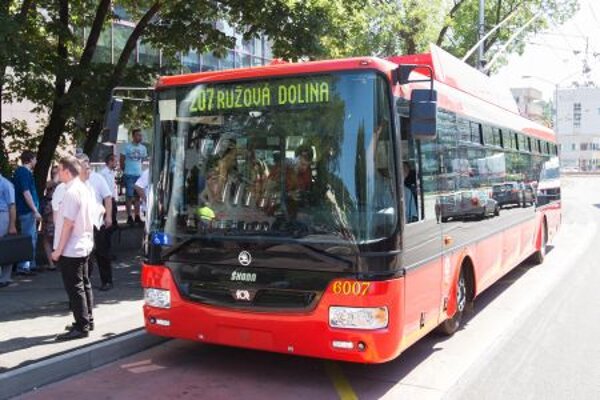 BRATISLAVA’S TROLLEYBUSES have celebrated their 105th birthday. On July 19, 1909, inhabitants and visitors of the city (then called Prešporok in Slovak, Pressburg in German and Pozsony in Hungarian) witnessed the festive launch of the city’s first trolleybus line.

This new means of city transport, propelled by an electric engine, was called the Electric Automobile Line to the Vydrica Valley. A ticket cost fifty hellers, or half a crown.

The first trolleybus line, however, was built in 1904 and led from the city of Poprad to Starý Smokovec in the High Tatras.

Plans to implement a trolleybus system in Bratislava had been under consideration since the late 19th century. Originally, trams were planned to drive to Vydrica Valley from 1908 on, but for economic reasons, a trolleybus line was built instead.

The first line in the city led from Predstaničné Square under the main railway station through Pražská and Brnianska Streets and Patrónka to the terminal station at Železná Studnička in the valley of Vydrica Creek.

The total length of the line was 5,800 metres and of the first seven trolleybuses, four were open and meant only for summer operation, while three were closed and operated in winter. The vehicles were constructed in Daimler Werke Wiener Neustadt in today’s Austria.

In summer, buses ran every 60 minutes in the morning and 30 minutes in the afternoon; in winter, the schedule was adapted to the weather, and 1911-1912 was the last winter operation.

In the following years, trolleybuses were operated only in good weather, and locals were informed of the schedule via announcements in newspapers and on billboards at selected stops. The trolleybus line operated in Bratislava until 1915, and was cancelled due to technological problems and uneven roads.

They did not return until 1941, when modern trolleybuses of German-Czech production were imported. A new line was added, running from the Slovak National Theatre to the Main Railway Station. Further new trolleybus lines were added even during the war.

Škoda trolleybuses started to be used in 1951, and some of these are still in operation today, according to the TASR newswire. After a slump in the 1960s due to the greater prevalence of regular buses, a boom occurred during the 1970s oil crisis that brought trolleybuses and trams into much wider use. The latest trolleybus lines include 207, 211 and 212.