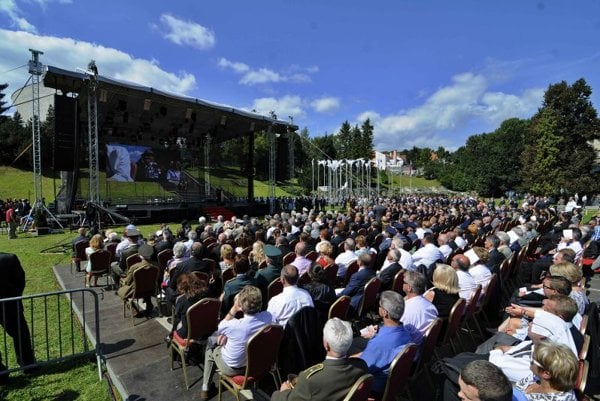 At least 10,000 guests were expected to attend the celebrations of the 70th anniversary of the SNP. (Source: TASR)
Font size:A-|A+0

The uprising emerged in the context of the European anti-fascist resistance and August 29, the day when the uprising started in 1944, is a state holiday. By rising up against the occupiers, Slovaks tried to show the world that most of the nation supported the Allies, not the official government of the country at the time, Marek Syrný, a historian at the SNP Museum in Banská Bystrica, told The Slovak Spectator.

“It has been announced that more than 90 wreaths will be laid, so there will be many delegations taking part in the main SNP celebrations,” Mičev said, as quoted by the TASR newswire.

The Defence Ministry registers about 2,000 veterans of the anti-Nazi resistance. They will also attend the ceremony, as reported by TASR.

The costs of the main ceremony in Banská Bystrica are estimated at €480,000. About €200,000 has gone toward the reconstruction of the SNP Museum area, €35,000 toward the technical and organisational provision of the event and €85,000 for the cultural programme. Some €40,000 was spent on organising international conferences, and €50,000 for international exhibitions. Mičev also said that €20,000 went to the national cultural monument in Kalište, TASR wrote.

“Participants of the SNP fought for our freedom, they raised the nation’s self-confidence and significantly contributed to the fact that Slovakia became part of the [anti-Nazi] alliance,” said President Andrej Kiska, who attended a commemoration of the uprising at SNP Square in Bratislava on August 27, while praising the courage of direct SNP participants.

He noted that their participation was accompanied by a personal decision that involved the awareness of risking their very lives.

Without the SNP, Slovakia would have been considered a country that lost World War II, said Prime Minister Robert Fico on August 23 during a SNP commemorative event in Jankov Vŕšok.

Fico noted that 2014 is a year of many anniversaries, including the start of World War I and the SNP, which are mostly linked with a huge number of victims, while adding that “the strange thing is that we have not learned our lesson. Once again someone is seeking an enemy; once again someone wants at any price to create tension in Europe”, TASR reported.

In response to the start of the Nazi occupation of Slovakia, Slovak Army Lieutenant Colonel General Ján Golian issued the code “start with evacuation” for military units on the evening of August 29, 1944, which signalled the start of active military defence against the occupation. Germans sent the occupying army to Slovakia to help the Slovak government extinguish the partisan movement. The president of the Slovak state, Jozef Tiso, agreed to the occupation on August 28.

In the following hours and days, the majority of Slovak military units, as well as civilian volunteers mainly in central but also eastern and western Slovakia, joined the insurgents. The SNP uprising started even though preparations were incomplete and coordination with the Soviet Red Army had not been secured, which, along with other factors, resulted in the failure of several partisan military units.

Right from the start, the SNP did not go according to plan. A quick and effective German pacification action had the most negative impact on the uprising, eliminating some of the best units of the insurgent Field Army. All of western and eastern Slovakia (with some exceptions) fell from the insurgents’ grip, caused in part by the hesitance and inflexibility of the local garrison commanders, who were unable to organise the takeover and transfer of units to Banská Bystrica.

In the first days of the SNP, the insurgent-controlled territory was about 20,000 km2 in size, but it shrank each day as German units advanced. Initially, about 18,000 insurgent soldiers and officers faced the German occupational army. Their number increased after the first official mobilisation on September 5 to 47,000 and after the second mobilisation at the end of September 1944 to 60,000 soldiers. But many of them were poorly armed.

The SNP’s military importance lied in its ability to control a crucial territory with important communications hubs, which linked the northern wing of the German defence against the Red Army with the southern one. It prevented German troops from fully using Slovak roads and railways for transportation of troops and materials to the eastern front, and caused losses in material and military force. The SNP helped exacerbate the political and moral collapse of the fascist regime in Slovakia.