Slovaks to comment on Ukraine during Russian minister visit

SOMEONE from the Slovak government will raise the issue of Ukraine with Russian Defence Minister Sergey Shoygu when he visits Slovakia to attend the ceremony commemorating the 70th anniversary of the Slovak National Uprising (SNP), according to Slovak Foreign Minister Miroslav Lajčák. 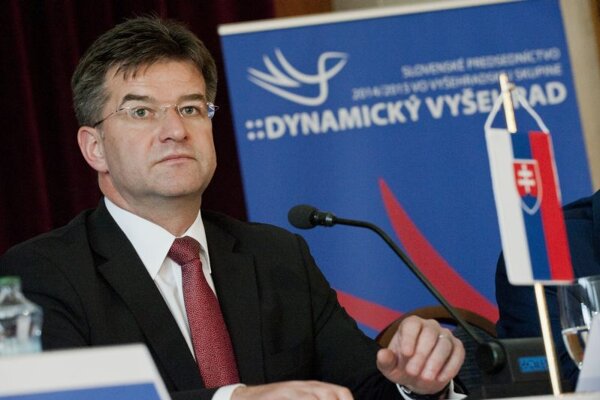 SOMEONE from the Slovak government will raise the issue of Ukraine with Russian Defence Minister Sergey Shoygu when he visits Slovakia to attend the ceremony commemorating the 70th anniversary of the Slovak National Uprising (SNP), according to Slovak Foreign Minister Miroslav Lajčák.

“We are not saying one thing in Brussels, a second in Bratislava and a third thing, let’s say, in Moscow,” Lajčák told the SITA newswire after the August 27 cabinet session.

The Russian Embassy in Slovakia has responded by saying that Shoygu does not plan to negotiate with any members of the Slovak government.

“The embassy is honoured to inform that the programme of the visit of the Russian defence minister to Slovakia does not assume any official negotiations with representatives of the Slovak government,” the embassy statement reads.

Prime Minister Robert Fico, however, has been firm in his criticism of the tit-for-tat sanctions between the European Union and Russia. Fico called the sanctions “senseless” and a threat to Slovakia’s economy on August 9, drawing criticism from members of the opposition and local media. The adoption of sanctions that damage the whole region is short-sighted, he said one week later, adding that he is not going to change his position.

“Slovakia is member state of the EU; we want to be sympathetic players, but that does not mean that we will go to the slaughterhouse like lambs,” Fico said on August 19, as quoted by SITA, adding that he belonged to the group of prime ministers who even during the first round of Russian sanctions expressed clear objections.

Yet, Lajčák suggested on August 27 that one should not seek conflict where there is none.

“The fact that we are approving sanctions does not mean that everyone is enthusiastic about them,” Lajčák said, as quoted by SITA. “But we have never said that we are against them or that we are blocking them. So conflicts should not be sought where there are none.”

Just days after the EU and the United States passed targeted sanctions against Russia, Moscow imposed a one-year embargo on food imports from the EU, United States, Australia, Canada and Norway on August 7. The Ukrainian parliament passed a law on August 14 to impose sanctions against Russian firms and individuals who support or finance separatists in eastern Ukraine.

Intense media coverage was devoted to an invitation for Russian President Vladimir Putin as well as Ukrainian President Petro Poroshenko sent by Ivan Gašparovič, who was Slovak president until mid-June. The invitation was sent to the presidents of states whose citizens participated in the liberation of Slovakia in 1944 and 1945.

President Andrej Kiska, Gašparovič’s successor, was unaware of the invitation, which was sent out after Russia had invaded Crimea and before the conflict in eastern Ukraine broke out and prompted the EU and the US to impose sanctions.

Slovak foreign policy analyst Alexander Duleba opined that he would not invite Putin for any celebration when Russia is considered an aggressor in the conflict in Ukraine, the Sme daily reported. Originally, local media speculated that Russian Prime Minister Dmitry Medvedev may come instead of Putin; however, on August 20, SNP Museum Director Stanislav Mičev confirmed that Shoygu would come.

Shoygu became the minister of defence in 2012 while the media described him as a close ally of Putin who frequently accompanies the Russian president during his hunting or fishing excursions. Reportedly, Shoygu is tightlipped with the media and only rarely gives interviews while one of his main characteristics is that he is “unshakably loyal”, SITA reported.

Sanctions by the EU might mean certain economic loss, but one must be prepared to accept this loss, while “trade interests must not be placed above basic values of freedom and democracy,” the TASR newswire quoted on August 15 from Kiska’s Facebook profile.

According to Kiska, Slovakia has suffered twice in the past when it became a pawn in a game involving larger neighbours.

“In 1938, [European] powers decided to hand over Czechoslovakia to Nazi Germany, which thus gained momentum for further expansion, and in 1968 nobody defended us against the communist Soviet Union,” wrote Kiska, adding that Slovakia should be at the forefront of those calling on democratic countries to adopt a joint course of action. “If words are not enough, appeals must be given more weight by introducing economic sanctions, if necessary, against countries that want to expand, dictate and menace others.”