Top officials and dignitaries from 40 countries gather for SNP celebrations

BETWEEN 10,000 and 15,000 people attended the celebrations of the 70th anniversary of the Slovak National Uprising (SNP) in Banská Bystrica on August 29, SNP Museum Director Stanislav Mičev estimated for the SITA newswire. 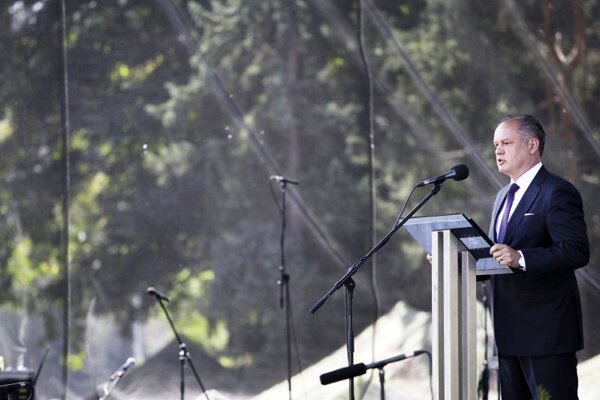 BETWEEN 10,000 and 15,000 people attended the celebrations of the 70th anniversary of the Slovak National Uprising (SNP) in Banská Bystrica on August 29, SNP Museum Director Stanislav Mičev estimated for the SITA newswire.

The official portion of the festivities started in the piety room of the SNP memorial, and continued with a gathering which was attended by Slovakia’s highest constitutional officials and delegations from some 40 countries, SITA wrote. The highest-ranking foreign guests were Czech President Miloš Zeman and Russian Defence Minister Sergey Shoygu.

Polish President Branislaw Komorowski, who was expected to attend the event from its start, changed plans in the last moment and only came to lay wreath at the memorial in the afternoon. Officials and organisers did not specify the details of the change, but Slovak media speculated it was in order to avoid meeting the Russian minister.

Later on the day, Poland delayed the departure of Shoygu from Slovakia when it would not allow his plane to fly through its airspace. The plane was only authorised to fly over Poland when it changed its status from military to civilian.

Kiska: SNP needs to be passed on

“Our freedom, democracy, and state independence, the position of Slovakia in Europe and in the world, our opportunities, and our historical conscience, all that is based on the decision of the SNP participants from 70 years ago, their courage, and their sacrifices,” said Kiska, who was the first one to address the crowd which gathered in Banská Bystrica for the occasion. He labelled the SNP as the second biggest armed revolt against fascism.

The SNP is such an important event in Slovakia’s history that it is impossible to avoid, which is also why politicians and their ideologues have tried to twist the facts, abuse, defame, or steal the legacy of the uprising for themselves, Kiska said. The SNP has been turned into a political slogan over the decades, as the uprising’s democratic, anti-fascist and civic characteristics were often ignored in the process.

“We shall be thankful to all those who have in the past contributed to the truthful picture of the uprising, and who at present maintain, cultivate, and pass on this true image,” Kiska said, calling particularly on teachers to make sure the next generations will understand and feel the importance of the SNP.

Kiska’s Czech counterpart, President Miloš Zeman, claimed in his speech that the SNP sped up the end of the war, and labelled it one of the most important events in the history of the Slovak nation, the Sme daily reported.

Speaker of Parliament Pavol Paška in his speech focused on extremists who deny the legacy of the SNP and call it a black day in the history of the nation. One is Banská Bystrica regional governor, Marian Kotleba, who has not been invited to the celebrations in relation to these views.

Paška called it the biggest paradox of the Slovak history that “the confused and children” who are acting as the biggest Slovak patriots prefer to celebrate the fascist and Nazi politicians who assisted in the self-destruction of their own nation, Sme reported.

“They would have beaten and enslaved us all,” Paška said, as quoted by Sme. “It is insane that today some confused Slovak nationalists and neo-Nazis claim their support for this.”