SUPPORTERS of the ideas of families and marriage calling for higher legislative protection have succeeded in collecting enough signatures to hold a referendum. Opponents plainly call the proposal an “anti-gay” referendum. 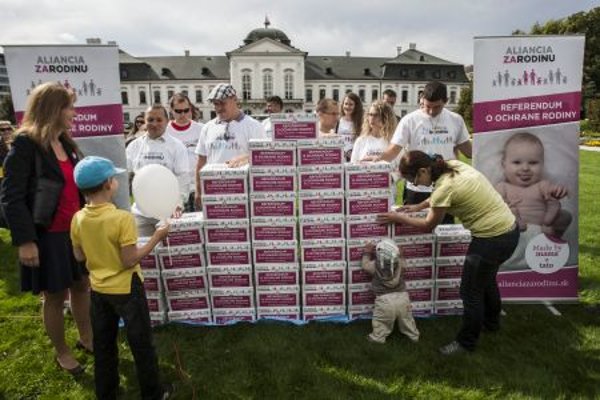 The Alliance for Family has collected 400,000 signatures under its petition to hold a referendum on the protection of family. (Source: SME)
Font size:A-|A+0

The Alliance for Family (AZR), which currently shelters over 100, mainly pro-life and traditionalist, organisations, has collected 400,000 signatures under its petition to hold a referendum on the protection of family, thus fulfilling one of the main legal requirements for a plebiscite to be held in Slovakia, the support of 350,000 citizens.

“We have achieved our goal and I am honoured that the AZR, as the first civic initiative in the history of Slovakia, managed to collect the necessary number of signatures to hold the referendum,” said Anton Chromík, spokesman for the AZR, on August 26, as quoted by the SITA newswire.

Chromík also noted that many people have donated money to the AZR, which helped finance the collection of the signatures. According to him, the organisation has received more than €20,000, SITA wrote.

AZR declares itself a non-partisan and non-religious organisation which emerged during the preparations for the September 2013 March for Life as an alliance of dozens of pro-family organisations.

Representatives of the AZR handed over the signed petition to President Andrej Kiska on August 27. They are hoping to have the referendum held alongside the municipal elections on November 15 this year.

When the AZR launched its petition on April 5, they did so claiming that none of the current efforts of Slovak politicians to secure better protection for marriage and family fulfils the aims of the AZR to the full extent. The AZR remains on this position despite the fact that on June 4, parliament adopted a revision to Slovakia’s constitution, which among other things defines marriage as “a unique bond between a man and a woman” and adds that “the Slovak Republic thoroughly protects marriage and pursues its good”. This becomes effective as of September 1.

The AZR wants to go further than that in the name of the protection of the interests of children who they say have the right to grow up in a family with a father and a mother, and to be protected from what they call inappropriate sexual education in schools.

While the referendum apparently has at least 400,000 supporters, there is also significant opposition towards such initiative. The main objection that has been voiced repeatedly is that it is aimed against certain citizens, namely LGBTI persons and people living in unions other than traditional marriage.

“Nobody wants to take freedom from homosexuals,” Chromík said as quoted by SITA, but added that a same-sex relationship can never be equal to marriage, arguing that children can only be born from a union between a man and a woman.

A referendum is only valid if more than half of the voters attend the vote. Chromík, while hoping that the referendum will succeed, did not rule out the possibility that they would organise another such plebiscite in the future if the current one fails.

The president is obliged to announce a referendum within 30 days after having received the petition, and the referendum then must be held within three months since the day it was announced. The 30-day deadline could however be prolonged if the president has doubts about the constitutionality of one or more of the referendum questions and decides to turn to the Constitutional Court to rule whether the proposed referendum questions are acceptable. In such instance, the deadline is suspended until the Court delivers its ruling.

A referendum cannot be held on the state budget, taxes or on issues involving fundamental rights and freedoms, based on the Constitution. While the AZR claims that they had the questions approved by lawyers, there are some voices saying that the questions they propose might interfere with fundamental rights, namely the right for privacy and for family life for non-heterosexual people.

If the Court deems some of the questions unconstitutional, the president will be obliged to announce the referendum nevertheless, featuring only those questions that have been approved by the Court. If he didn’t do so, the referendum would be marred.

Kiska hasn’t made it clear yet what he will do over the referendum, according to SITA. His spokesperson Peter Petrus only noted that Kiska will act within the scope of his competencies and observe the legal deadlines.

1. Do you agree that no other cohabitation of persons other than a bond between one man and one woman can be called marriage?

2. Do you agree that same-sex couples or groups shouldn’t be allowed to adopt children and subsequently raise them?

3. Do you agree that no other cohabitation of persons other than marriage should be granted particular protection, rights and duties that the legislative norms as of March 1, 2014 only grant to marriage and to spouses (mainly acknowledgement, registration, or recording as a life community in front of a public authority, the possibility to adopt a child by the spouse of a parent)?

4. Do you agree that schools cannot require children to participate in education pertaining to sexual behaviour or euthanasia if their parents or the children themselves do not agree with the content of the education?