Commemorating the death of the Blood Countess

THE LEGENDS say she killed several hundred young girls and bathed in their blood in an attempt to retain her youth. Elizabeth Báthory, who has been labelled the most prolific female serial killer in history, died four centuries ago on August 21, 1614 in Čachtice Castle, western Slovakia. However, her real actions, motives and cause of death remain a subject of debate. 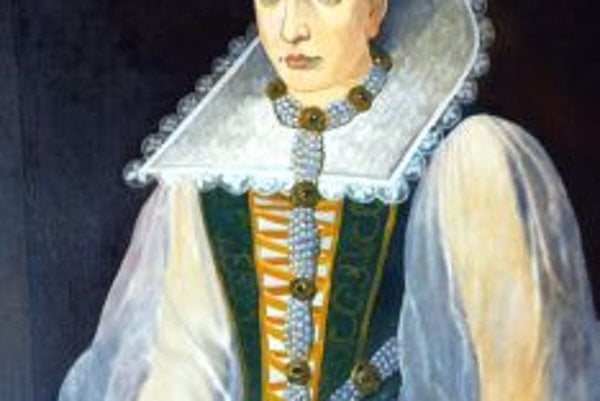 THE LEGENDS say she killed several hundred young girls and bathed in their blood in an attempt to retain her youth. Elizabeth Báthory, who has been labelled the most prolific female serial killer in history, died four centuries ago on August 21, 1614 in Čachtice Castle, western Slovakia. However, her real actions, motives and cause of death remain a subject of debate.

Báthory, dubbed the “Blood Countess”, was probably born on August 7, 1560 in the Ugrian town of Nyírbátor, which now lies in eastern Hungary. She married Hungarian warrior hero Count Ferenc Nádasdy, dubbed the “Black Captain”, and known for numerous atrocities he committed during wars with the Ottomans, according to the TASR newswire.

While her husband was away fighting the Ottomans, Báthory is said to have tortured and murdered young girls, particularly in Čachtice Castle, but also in castles in Sárvár, a town in Hungary, and Austrian town Deutschkreutz. In December 1610, Ugrian palatine György Thurzó ended her killing spree when he caught her in the act in Čachtice Castle; however only her aides were sentenced to death. Despite the court having received her personal list of 650 murder victims, Báthory remained under house arrest at Čachtice Castle until her death four years later, historian Jozef Kočiš told the SITA newswire.

Journalist Andrej Štiavnický, who devoted 31 years to studying Báthory’s life, said that documents of Ugrian nobles called her “the beast; something between an animal and a human”.

“It was a woman who stopped at nothing,” Štiavnický said in interview with the Sme daily. “When she went into a trance she turned into an animal. No one knows how many girls she murdered between 1585 and 1610; Čachtice Castle was just one of the many [castles] she possessed and everywhere she moved she was committing atrocities.”

Báthory belonged to one of the most eminent Hungarian families; her uncle became a Polish king and her nephew ruled Transylvania. In the middle of the 16th century, the Báthorys accounted for 19 counts with 4,299 farmsteads.

However, besides wealth and high social status, there was allegedly another characteristic feature of her family – eccentric personalities, extraordinary cruelty and sexual deviancy, accompanied by health problems, particularly epilepsy and syphilis. Her cousin was a well known Satanist, her aunt and nephew were said to be sexually debauched and her brother a notorious alcoholic. This was probably a result of genetic disorders caused by intermarriage and inbreeding, according to TASR.

Elizabeth was no exception, as she suffered from epileptic seizures, and Štiavnický said there are witness reports of Báthory’s problematic behaviour even during her childhood.

“Elizabeth is a child of indirect incest,” Štiavnický said, as quoted by Sme. “According to witness testimonies, at the age of seven she despised her mother, hated her father, she was beating animals and had problems with servants and her siblings.”

At the age of 11 Elizabeth was engaged to Ferenc Nádasdy, a man of great masculinity and cruelty who was also a member of a prominent family and the son of the Ugrian palatine, the highest office in the kingdom. She married when she was 15, which was a common practice. Since her husband joined campaigns against the Ottomans and was not at home, Elizabeth became bored and allegedly started practicing black magic and later sent her children away so she could focus solely on her “games”, according to TASR.

It is impossible to determine how many people Báthory killed. The number 650 comes from her personal list (its originality has been proven by handwriting analysis) and it is probably just the tip of the iceberg, according to Štiavnický. He pointed out that Elizabeth Báthory made it into Guinness Book of World Records as the most prolific female murderer and the most prolific murderer of the western world.

She practised all methods of torturing that she learned from her husband: she drove needles under girls’ fingernails, stabbed them with knitting needles, or stripped them bare and led them out into the snow to be doused with water until they were frozen, the stories go. She would also burn them with candles and insert heated iron implements into their genitals, according to TASR.

However, some historians opine that those stories are mere myths. There is also an alternative picture of Báthory, highlighting her education, her ability to speak several languages and her managerial capabilities.

Historian and ethnologist Katarína Nádaská said in interview with the Pravda daily that Elizabeth had to adopt a male role after the death of her husband in 1604 and secure the political and economic interests of her family. Therefore, other nobles would try to discredit her by spreading stories about sorcery, Satanism and torturing or murdering young girls.

“After she lost her husband she could have had political ambitions because she was a great diplomat with a knack for politics,” Nádaská said, as quoted by Pravda. “Therefore, it was more than necessary to discredit her.”

However, Štiavnický disagrees, claiming that if historians or artists create an image of Báthory as a saint, a healer or a victim of political intrigues, that is “a moral failure”. Also, historian and writer Pavel Dvořák said that it is very rare to have such a huge amount of evidence against someone living in the Middle Ages, and therefore many of the accusations cannot be doubted. On the other hand, he conceded that bathing in blood is just a figment of people’s imagination, Pravda reported.

Báthory was caught on December 29, 1610 when Ugrian palatine György Thurzó came unannounced to Čachtice Castle and allegedly found her torturing girls. There were around 30 noblemen as witnesses. However, instead of arresting her and having her executed, he imprisoned her in the castle and initiated a court case against her. Thurzó did this to secure the credit of Ugrian noble families connected to Nádasdys, since he was dependent on their support, according to Štiavnický.

“The result is that Elizabeth Báthory was not judged, convicted, investigated or executed,” Štiavnický said, as quoted by Sme, “despite the fact that she was committing crimes against humanity which have no parallel.”

Another reason is that in those times the girls were actually her property and she could do to them whatever she wished. Not just the king, but even Báthory requested a trial, as she knew that her actions did not violate the law, Dvořák said, as quoted by Pravda.

There are many legends about her death. The most popular says that she was kept bricked up in a wall with only small slits left open for ventilation and the passing of food. Another claims that she was raped, stabbed to death or poisoned. However, Štiavnický said that she died from natural causes, claiming that there is a letter in which Ugrian palatine Stanislav Thurzó, who witnessed her death, describes it to György Thurzó.

Nádaská said that the case of Elizabeth Báthory has still not been closed and since psychiatry as a medical discipline did not exist in those times it is hard to create her psychological profile. Yet, it is easy to see why she is referenced in so many legends and pieces of art, including several movies and numerous heavy metal songs.

“Stories about blood have always fascinated people; even vampires are still popular,” Nádaská said, as quoted by Pravda. “Magic, blood, mysterious Satanic rituals – this has been fascinating people all around the world, not just here [in Slovakia].”