THE MUNICIPALITY of Moldava nad Bodvou cancelled the festival called Moldava Spolu (Moldava Together) that was to take place in the town’s Budulovská Roma settlement on August 29, just few days before the start of the event, citing safety concerns. 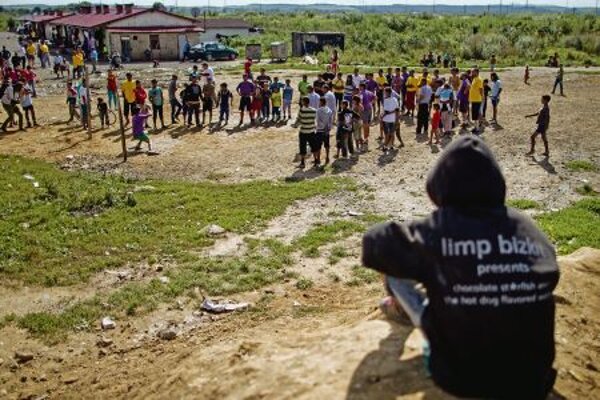 THE MUNICIPALITY of Moldava nad Bodvou cancelled the festival called Moldava Spolu (Moldava Together) that was to take place in the town’s Budulovská Roma settlement on August 29, just few days before the start of the event, citing safety concerns.

The festival, supported by the US Embassy, was to unite the Roma minority and the majority population through musihotos and more, with both Roma and non-Roma performing. It was organised in a response to the raid of the settlement conducted by 63 police officers on June 19, 2013. They were purportedly seeking seven men for which they had arrest warrants. They found none of those men, but violence ensued, some people were injured and 15 Roma were taken to the police station.

“I am surprised how institutions are able to blight an event with a purely positive message, which should lead to an increase of tolerance and communication,” Matúš Vallo of the Mestské zásahy civic association, which co-organised the event, told the press on August 26. “It was also about providing the possibility for open-minded people to come to the settlement and see it in a safe festival area.”

The town’s mayor, István Zachariaš, said that he made the decision in accordance with the police’s recommendation, which stated that Budulovská is not a safe place for the festival. It would violate several security and hygienic rules and in the event of of emergencies, ambulance or fire fighter vehicles would not be able to enter the area, he told the Sme daily. Zachariaš also said that he does not fear potential legal action, as his reasons for banning the festival were well-grounded.

“I am sorry, but I cannot think over it in a way other than for safety’s sake,” Zachariaš said, as quoted by Sme on August 22.

The organisers said they are considering legal steps against the ban. They questioned the police’s claims and labelled the decision as two-faced, since the municipality indicated no serious reservations about the festival during earlier discussions.

“We will not look for another place,” Martin Vavrinčík of ETP, a non-governmental organisation that co-organised the event, told the press, “because it would indicate our agreement with the ban, which violates the law, according to us.”

Despite the ban, festival organisers came to the Budulovská settlement and played a game of football with its residents. There was also a concert in a garage and musicians playing guitar in the streets, as well as a theatre performance for children, Sme reported on August 30.

“We decided that we will come here to see our friends, play football with them, play guitars together, sing and do a theatre for children,” Vavrinčík told Sme.

Organisers: The place is safe

The Interior Ministry supported the ban, agreeing with police claims about inappropriate roads crossing the settlement, which are too narrow for the purposes of a music festival. The police also criticised the number of people living in the settlement, estimating that there are 2,000 inhabitants in Budulovská, which could lead to dangerous overcrowding at the festival, they said. Other problems cited were: a messy environment, including waste and excrement on the street, stray dogs, as well as a nearby river that could be dangerous for visitors, Sme reported.

Lýdia Šuchová from the Equity civic association, another co-organiser of the event, said she has visited the settlement several times and the police’s claims are untrue. The main road leading to the settlement is safe, with enough space for two cars to pass each other. Moreover, organisers planned to allow only the festival’s personnel, supervising bodies, and artists to use it during the event.

The organisers also did not ask the municipality to clean the settlement, as the wording of ban states, but asked for cooperation and tools for cleaning and grass cutting. They planned to clean the whole settlement by themselves with the help of the locals, according to Šuchová.

“Even in this way the festival could contribute to the improvement of the inhabitants’ attitude towards cleanliness of the settlement,” Šuchová said in the festival’s press release, “because we all know that happiness and positive motivation is the best way.”

“I cannot imagine that some of us would risk his or her professional credit by organising a risky event or an event just for appearances,” said co-organiser Michal Kaščák from the Pohoda agency (which organises Slovakia’s biggest open-air festival, Bažant Pohoda), as quoted by Sme.

During a press conference the organisers condemned the approach of the municipality, which they say made the decision in secret. The organisers claim they were never given an opportunity to propose solutions to the potential problems. Moreover, the text of the ban reached the organisers just nine days before the event, though the law gives people 15 days to comment on such a ban.

Vavrinčík said the mayor originally agreed to hold the festival during a personal meeting with the organisers. They sent an announcement of the festival to the municipality on May 28. They met with the mayor again in early August to discuss some organisational issues. Zachariaš said nothing about banning the festival. He just asked them to send him additional information on the exact location of the stage, insurance and so on. They approached the police too, who also agreed to allow the festival, Vavrinčík said.

However, the municipality demanded additional information from the organisers on August 13, who received the notice only on August 18, the same day the ban was announced.

“The town asked us about additional information, but it did that at the point when it simultaneously decided to ban the festival,” Vavrinčík said, “and we had no chance to respond.”
Zachariaš told the TASR newswire that he declined to release a permit for the festival, as the organisers failed to present him with all the proper documents, mainly those pertaining to security.

“I needed to know on which specific plots [of land] the festival would have taken place, where the stage would have been located and how the police patrol would have been ensured,” the mayor said. “They did not provide anything. So, at my own initiative, I approached the state police for a stance, and I was told that it would not be safe [to organise the festival] in the settlement.”

The organisers can appeal against the decision since it was issued in conflict with the law on public cultural events and administrative rules, and it violates the rights of the organisers and all the people willing to participate in the festival. The way in which the municipality made the decision violated the law on municipalities as well as the proceeding rules of the Moldava nad Bodvou municipality, said Ondrej Dostál, the Director of the M. R. Štefánik Conservative Institute, an NGO.

This was already the second ban; earlier, the town decided that the festival should not take place in June on the anniversary of the 2013 police raid, because it could be considered controversial or provocative.

Nevertheless, the organisers still want to have the festival in the Budulovská settlement, but they need to feel they have the support, or at least acceptance of, the municipality and the police, as well as the approval of the local Roma, according to Kaščák.

“They were preparing a cultural event and suddenly they were told that they are a security threat,” Kaščák said, as quoted by Sme. “Personally, I would not want to be in their position.”

On the other hand, the positive thing is that if the municipality can precisely name the problems, it will be able to discuss them with the festival organisers in advance next time, according to the organisers.

“We will try to do it, but it will be next year,” Vallo said in a press conference. “And we believe that it will go well.”