All facets of Polish culture on offer

IN SOME areas of Slovakia, Polish is traditionally the second language and the two cultures enjoy numerous other areas of overlap, too. But there is also much that is unique to the culture of Slovakia’s northern neighbour. 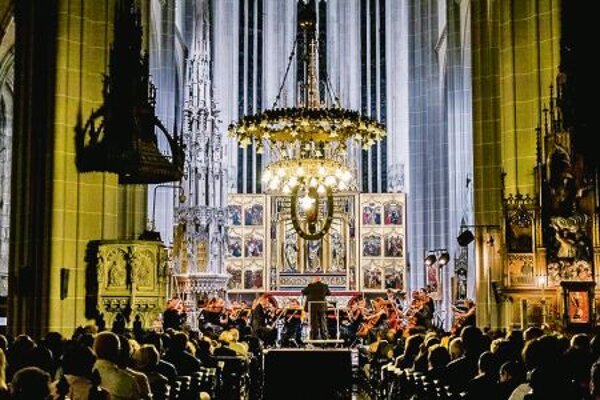 IN SOME areas of Slovakia, Polish is traditionally the second language and the two cultures enjoy numerous other areas of overlap, too. But there is also much that is unique to the culture of Slovakia’s northern neighbour.

“We strive to support all branches and genres of culture: theatre, film, classical music, jazz, literature, visual art,” Tomasz Grabinski of the Polish Institute in Slovakia told The Slovak Spectator. “Moreover, we also include science, especially the humanities.”

One major overlap between Slovakia and Poland is folklore and folk music. In October 2013, Polish bagpipers, together with those from the Czech Republic, Scotland, Italy, Croatia and Slovakia, competed in Oravská Polhora. In July 2013, a Polish team of bandits participated in the mock “Second International Meeting of Jánošíks” in the birthplace of the Slovak rebel who has become a legendary figure in Slovakia and Poland alike.

In Žilina, a Polish choir participated in the local Voce Magna 2013 festival: The Vox Amici choir, composed of Slovak and Polish members (from Bardejov/Gorlice), sang various works by Marco Frisina, Jože Leskovar and D. S. Bortniansky, as conducted by Ivica Cle-mentová. Polish conductor Ewa Strusiń-ska performed at the 23rd year of the central-European Festival of Concert Art Žilina in April 2013.

This August, Polish organist Piotr Rojek played in St Martin’s Cathedral in Bratislava at the Cathedral Organ Festival. In January, the Slovak Philharmonic in its Bratislava-based venue, the Reduta, hosted three winners of international performance competitions, among them Polish violinist Irmina Trynkos. And in April, the Košice Musical Spring hosted Polish conductor Marzena Diakun, who led the Slovak State Philharmonic Košice in playing the works of Mozart and Polish composer Henryk Mikolaj Górecki.

Other music genres extend from klezmer, the traditional Jewish music of eastern and central Europe (where Polish Kroke joined forces with Slovak Pressburger Klezmer band), through the “Rock in the Museum” project where three blues/rock bands, Cheap Tobacco, Gruff! and Joanna Knittler Folk & Blues Connection, performed in the Museum of Trade in Bratislava on the Night of Museums on May 17.
Exceptional, rare and curious genres of Polish music are represented by the Amadrums Trio, who experimented with contemporary classical music on their improvised percussive instruments at the World of Drums festival in November 2013; and by the Karbido quartet which “played the table”, a specially adapted table with a resonating board, in Košice in May 2014.

A completely different cup of tea was the parade of tiny vintage cars, featuring the Fiat 126p (which was produced in Poland), nicknamed the Maluch, which was part of the May 1 celebrations in Bratislava. Poles celebrate not only May 1 (Labour Day), but also May 2 (the “Day of Polish Expats”) and this light-hearted parade offered a trip down memory lane.

Poland and Slovakia (as well as Hungary and the Czech Republic) are members of the Visegrad Four (V4), which celebrated its 20th birthday in 2013. This was reflected in intensified activities. Events focused on foreign communities have been launched in the Old Market Hall in Bratislava. One is the Visegrad Market, a festival of modern design of these four countries, in which Poland is represented by the Kioosk association of young, independent design.

The Fjúžn festival of minorities normally focuses on the art, culture and lifestyle of immigrants who come to Slovakia, but in April 2014, it was also impacted by the V4 anniversary. One of the performers was young jazz/funk singer Ifi Ude who was born in Nigeria, but arrived to Poland aged five and has managed to merge these two cultures in her work.

Film, music and theatre have also been largely influenced by the 20th anniversary of the V4. Festivals like Febiofest, Visegrad Film Forum, Between East and West, Divadelná Nitra, the Festival of the Theatres of Central Europe, or the traditional Stretnutie, Setkání, Spotkanie and Találkozás Festival of Theatres from Central Europe all reflect this. There was also a theatre-dance workshop from the V4 countries in July 2014 at the foot of Fiľakovo Castle, which aimed at training performers and theatre-makers from these states, both professionals and amateurs, to rehearse together a piece based on Pushkin’s “A Horse Under a Snow-ball Tree”.

Polish visual artists not only regularly exhibit their works in the Polish Institute on SNP Square in Bratislava, but Jan Pamula’s statues were also exhibited there within the Statue and Object 2014 festival. The photo exhibition V4 Through My Eyes was first presented in Bratislava’s GUBA gallery, and then in the House of Photography in Liptovský Mikuláš. In Košice in Spring 2014, the Private Nationalism exhibition of modern art presented the issues of hatred, prejudice and misunderstanding in work by artists from the V4 countries, as well as Germany and Turkey.

Grabinski cited his country’s participation in the regular Visegrad Days organised in autumn in Košice and in the annual concert Mosty (Bridges) – Gesharim, organised under the auspices of the V4 in the synagogue in Liptovský Mikuláš as examples of Polish cultural activities within this grouping.

The year 2013 marked a milestone for Slovak culture: the city of Košice became, along with Marseille, the European Capital of Culture (ECOC) 2013.

“We were quite active in the ECOC Košice 2013 project,” Grabinski said. “Polish culture minister Bogdan Zdrojweski participated in the opening [ceremony], we prepared a Polish cultural spot in the puppet theatre for the closing ceremony, and the concert by Polish composer Krzystof Penderecki in St Elizabeth’s Cathedral in September 2013 by the Beethoven Academy Orchestra with Rafal Kwiatkowski soloing on cello was the biggest event within the ECOC. However, we also participated in about 20 other events within this project, cooperating with various local partners.”

He added that the collaboration with Košice-based institutions continues in 2014, naming an exhibition about legendary alternative theatre Akadémia Ruchu, the Hevhetia publishing house and the September theatre festival as examples.

Asked by The Slovak Spectator about future events and projects, Grabinski highlighted the Polish performance at the Bábkarska Bystrica puppetry festival in Banská Bystrica and the discussion with Polish author Mariusz Szczygiel in Bratislava in September, as well as the most successful Polish film in recent years, Ida, coming to Slovak cinemas as part of the Projekt 100 project, and several concerts within the Jazz for Sale festival in Košice. The programmes can be found at polinst.sk.