Prisoners of war to widows

ONE HUNDRED years ago when World War I began, virtually the only way that soldiers could stay in contact with their close ones was by post. Many letters were sent, as well as a considerable number of postcards. 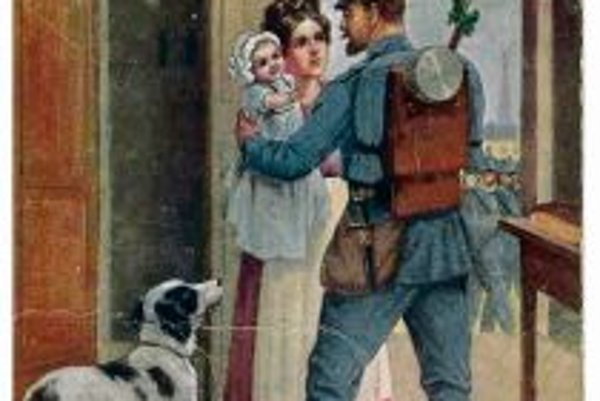 Demand for postcards at this time was enormous, and some publishers reacted promptly with postcards containing war themes. We can see one here, dating back to 1915, with the common theme of a soldier bidding his family farewell.

Of course, reality always looks better on postcards, but we all know how things actually were: enormous pain and millions of injuries and casualties. The injured and variously afflicted soldiers were also sent to prisoner-of-war camps. Most of these – around 1,900 – were pro-bably located in Russia.

In the Austro-Hungarian Empire, there were 40 such camps, and out of that three were on the territory of today’s Slovakia - in Dunajská Streda, Veľký Meder and Ša-morín.

The healthier captives were sent to work in factories, mines or farmsteads. Top army officials even drafted a slightly bizarre plan to have POWs help the widows of deceased Slovak soldiers. This plan, which some of the Russians probably found appealing, was never implemented. After the end of the war, most of the prisoners returned home. However, a few stayed here for good and might have put into practice the abandoned plan of aiding war widows.