Getting cultured in Košice

Olympic host cities and European Capital of Culture (ECoC) cities have a similar goal: to build a foundation and create a legacy that outlasts the events themselves. While an Olympic host city concentrates on athletes and venues, an ECoC concentrates on artists and venues. Košice’s designation as the 2013 ECoC accelerated the creation of a lasting cultural infrastructure to nurture art, and its projects add another layer to the city’s already rich cultural offerings. 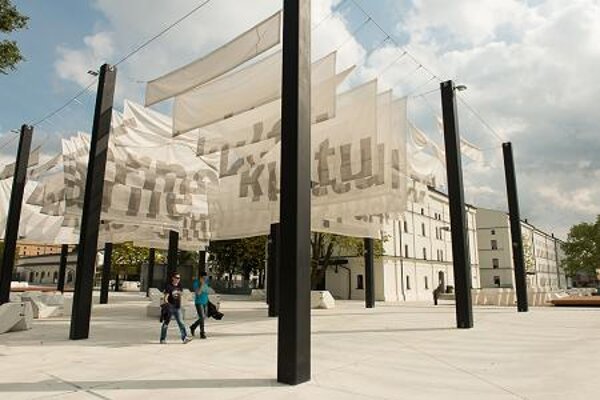 Olympic host cities and European Capital of Culture (ECoC) cities have a similar goal: to build a foundation and create a legacy that outlasts the events themselves. While an Olympic host city concentrates on athletes and venues, an ECoC concentrates on artists and venues. Košice’s designation as the 2013 ECoC accelerated the creation of a lasting cultural infrastructure to nurture art, and its projects add another layer to the city’s already rich cultural offerings.

Košice’s newest cultural venues are mostly buildings repurposed with the EU funds coming along with the ECoC designation. The Kulturpark, a former 19th century Hungarian army barracks reconstructed in 2012, has become a multi-purpose cultural space for art exhibitions, theatre productions, and music concerts. The developers committed to an underground 114-space parking lot to keep the area free from congestion. The walls surrounding the barracks were torn down creating an urban space. However, most events must finish by 22:00, so as not to disturb nearby residents.

Mindful of its history, the buildings were renamed with the military alphabet. For instance, the Alpha Building’s black, white and gray background was thoughtfully designed to not compete with the art and to encourage the artists to bring in the colour to the space. A former stable retains its form with the stalls painted white to give a stark contrast for rotating contemporary art exhibits.

For children, there is a building housing Steelpark, a joint project between U.S. Steel Košice and three educational and scientific institutions - Technical University in Košice, University of P. J. Šafárik and the Slovak Academy of Sciences. The exhibition offers more than 50 exhibits telling the story of steel in a kid-friendly environment. Kulturpark is catching on.

“People are curious about the new space,” said Adela Mižíková, a media consultant for the project. “The new space is doing the marketing for us.”

And no wonder, from the inside to the outside, there is something to engage even the most casual passerby. Outside there are two types of pavilions: those made of glass where you can see inside, or those made of mirrors where you can see your reflection. There are also wooden stages, à la London’s Hyde Park Speakers’ Corner, where people can get up and sing, perform or discuss. The stages are wired for performances.

Another repurposed art exhibition space with close ties to the Kulturpark is the Kunsthalle, originally a municipal swimming pool built in 1957-1962 and closed in 1992. Constructed in post-war modernism style, the building was reopened in 2013 as a venue for art exhibitions, conferences and concerts. The former swimming pool now has 25 cm of water for shows if needed, and it can be drained to house additional art exhibitions.

Literature lovers will find the museum of Sándor Márai (1900-1989), Košice’s best known native novelist, of interest. Márai set many of his works in his city of his childhood. During his visit to Košice, the late Archduke Otto von Habsburg, son of the last Austro-Hungarian emperor, said that he is familiar with the city thanks to Márai’s books. Visitors can view a 50-minute documentary of his life in English as well as view furniture, paintings, and artefacts from his long life. Not far away, on Mäsiarska street, is a sculpture of Márai by Péter Gáspár. It shows a seated Márai opposite an empty chair that invites one to sit in and perhaps imagine a conversation with the famed author. Children flock to this sculpture giving their parents an endearing photo opportunity.

One of the most innovative projects emanating from the ECoC was to transform outdated heat exchange stations (SPOTs) into neighbourhood cultural centres. These SPOTs are located in the high-rise apartment complexes that spread out from the city’s historic centre into the neighbourhoods where most people live. The idea is for the residents themselves, with the help of the SPOTs team, to claim these areas as their own and to devise their own ideas for cultural exhibits. For instance, each SPOT has a main topic; one is music and musical workshops, another has an exhibition of residents’ collections of various things. A bi-monthly newsletter (Pulz) gives details on the latest projects.

“We would like to support clever and interesting people and to start something new,” said Blanka Berkyová, executive director of the SPOTs project. “We show people through art that they can change a lot of things.”

Although the infusion of EU funds transformed some of the older buildings in Košice into hipper cultural spaces, there are plenty of museums and galleries that remain the backbone of the cultural scene predating the ECoC designation. The famed Košice Gold Treasure, which returned to the city in September 2013 after being on tour for five years, is now back at the Eastern Slovak Museum and worth seeing. The discovery of 2,920 gold coins, three medals, a Renaissance chain and a copper box was one of the largest coin finds in Europe’s history.

Although founded in 1993, the elegant, two-story Löffler Museum appears to embody much of the generosity of spirit and importance of a cultural life that is part and parcel of the ECoC ethos. This small and intimate museum has the feel of being in someone’s house. Vojtech Löffler (1906-1990) was a local sculptor, and he and his wife donated the museum to the town. Permanent exhibits include Löffler’s sculptures and memorabilia as well as his collection of the self-portraits created by his friends who were important 20th century Košice artists. Not content with exhibiting only his own work and collections, it was important for Löffler to help young artists. The ground floor supports young artists by giving them studio space to work in and a place to exhibit their work.

The Eastern Slovak Gallery is the city’s largest, with 6,400 works of art. It focuses on 19th and 20th-century art from eastern Slovakia and provides an overview of 20th-century Slovak art.

More science-minded visitors will enjoy the Slovak Technical Museum with its emphasis on the history of metallurgy, mechanical engineering, surveying and cartography. A planetarium and telescope exhibit on the top floor provides fun for the kids, as does a room offering hands-on physics experiments.

Those wishing for an outdoor experience should visit the Museum of Aviation that is part of the Slovak Technical Museum. On the grounds of the Košice Airport, this museum exhibits historical aircraft from all over the world in airplane hangars. It was largely created through the efforts of Slovakia’s former president Rudolf Schuster. He is not only a former mayor of Košice but also an aviation enthusiast. While president, Schuster would ask the heads of states of countries he visited for the gift of an old airplane. His support of the museum is apparently still ongoing as he just received a Soviet-made 11-18 transport plane from Hungarian Prime Minister Viktor Orbán as a gift for his 80th birthday. There is also a display of vintage cars in the last hangar.

And finally, while it’s not Madame Tussauds, the 45-metre high Urban’s Tower houses the largest wax museum in Slovakia with four floors of world famous historical figures hailing from eastern Slovakia. St Urban was the patron saint of winemakers, and the tower is located next to one of the Košice’s centrepieces – the gothic St Elizabeth’s Cathedral.