DESPITE Slovakia’s two-digit unemployment rate and 380,000 jobless people, companies are having difficulty filling their vacancies, especially those requiring technical expertise. Employers complain of a shortage of specialists with secondary or university-level educations. Both experts and employers see the growing labour market and a poorly tuned education system as behind the current shortage of workers with a technical education, and are calling for changes.“It happens relatively often that we are searching for applicants to fill the most wanted positions even for several months,” said Katarína Bobotová, director of Grafton Recruitment Slovakia. “Sometimes the process lasts more than one year.” 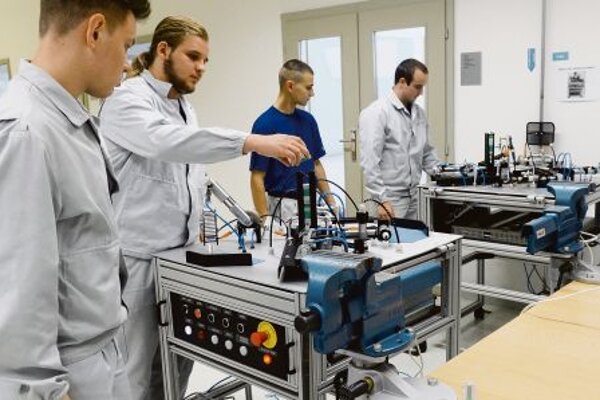 DESPITE Slovakia’s two-digit unemployment rate and 380,000 jobless people, companies are having difficulty filling their vacancies, especially those requiring technical expertise. Employers complain of a shortage of specialists with secondary or university-level educations. Both experts and employers see the growing labour market and a poorly tuned education system as behind the current shortage of workers with a technical education, and are calling for changes.
“It happens relatively often that we are searching for applicants to fill the most wanted positions even for several months,” said Katarína Bobotová, director of Grafton Recruitment Slovakia. “Sometimes the process lasts more than one year.”

Recruitment agencies report, in particular, a shortage of specialists with secondary technical education, like operators or programmers of CNC (computer numerical control) machines, welders, electricians, service engineers of machines, especially the more sophisticated varieties, while specialists with university-level education and expertise in information and telecommunications technologies (ICT) are also in high demand and difficult to find. Other sought-after professions are quality engineers, accountants, auditors, project managers, as well as doctors and medical staff.

Profesia.sk, the biggest job portal in Slovakia, reports the lowest responses to job offers in the sectors of IT, engineering and development, telecommunications, quality management and client support, indicating a shortage of qualified people to fill these vacancies.

Employers’ and industrial associations, in addition to companies themselves, confirm having problems filling certain specialised vacancies. Martin Hošták, the secretary of the National Union of Employers (RÚZ), noted that vacancies registered by the Central Office of Labour, Social Affairs and Family (ÚPSVaR) are dominated by graduates of technical fields. He recalled a presentation of an IT sector recording a continued lack of qualified ICT experts.

“This shortage increases every year, which means that the difference between supply and demand has been growing each year,” Hošták told The Slovak Spectator.

According to Radovan Maxin from the Federation of Employers’ Associations (AZZZ), an IT specialist with mastery of two languages, one of which being English and the second one something more exotic, such as Chinese or Japanese, can choose from plenty of job offers and will continue to be able to do so for some time.

Gustáv Budinský from the IT Association of Slovakia (ITAS) agrees, specifying that it is especially programmers and infrastructure administration specialists which Slovakia’s labour market lacks the most.

The automotive and electro-technics sectors, making up a significant portion of Slovakia’s economy, both lack experts with secondary as well as university-level education, while a knowledge of at least one foreign language is already a must.

“Because of the [high] number of Austrian and German companies in Slovakia, German is the most required and most useful,” Jaroslav Holeček, head of Slovak Automotive Industry Association (ZAP), told The Slovak Spectator.

The most sought-after professions in the car industry are those which require secondary-level education, like mechatronics, toolmakers, locksmiths, machine tool operators, varnishers and CNC machine operators, while professions requiring a university degree include technologists, designers, programmers and electronics experts.

Reasons for the shortage

Experts and market watchers see Slovakia’s growing labour market and badly tuned education system, as well as higher salaries abroad, as reasons behind the shortage of specialists in the country.

“The Slovak labour market has been growing for the third quarter and this means that more jobs are created than closed,” Martin Miklánek, the regional director of Manpower in Slovakia, told The Slovak Spectator, who sees the exhausted free labour forces as behind the growing shortage of some specialists. “The main reason is the growing demand for these professions.”

Moreover, many qualified workers leave Slovakia for western European countries and the US.

“Based on our surveys almost 20,000 qualified people work in the US, Germany and the United Kingdom,” said Miklánek. “Decisively, one of the main motivations is remuneration, but also opportunities for additional education and career growth, as well as better conditions for work in terms of equipment and facilities.”

Marcela Glevická of Profesia sees the shortage of experts in IT, compared to other sectors, as resulting from the fact that IT is a relatively young sector. It needs to hire more significant numbers of new employees, as it is one of the Slovak economy’s sectors in which the most new positions are opened.

According to the Association of the Electrotechnical Industry (ZEP), there is a lack of secondary and university-educated specialists, and while the quality of the school graduates is good and they are usable in production or applied development, the problem is in the number of graduates.

“The electro-technical industry is one of the driving forces of our industry and it requires a large amount of quality, prepared workers,” Andrej Lasz from ZEP told The Slovak Spectator. “The problem is the Europe-wide trend of a drop in interest in technical education despite the mostly very good remuneration of secondary and university-educated school leavers of electro-technical studies. We need to increase the interest in technical education and show its advantages; for example, the better chance of getting a job after completing school, compared with humanitarian fields.”

Others say the problem lies in Slovakia’s poorly structured education system, which does not meet the needs of the market.

“Schools produce an excess of graduates in professions for which there is low demand, and there is a lack of graduates with a quality technical education,” Luboš Sirota, CEO of McRoy Group, told The Slovak Spectator. “Apart from this, many positions which are in short supply have a ‘bad image’.

As a consequence, according to Hošták, graduates in political science, media communication, social work and similar specialisations find qualified jobs only with difficulty, and afterwards they work in positions requiring only secondary-level education, thereby taking jobs away from candidates with a secondary school education.

“This means that this also has secondary negative effects and thus it is necessary to change the education system,” said Hošták.

Holeček of ZAP sees the poor structure of schools especially as being behind the shortage of specialists.

“For the last 20 years employers were not able to define what they needed,” Holeček told The Slovak Spectator. “Because nobody defined this, schools taught what parents wanted, and they wanted their children to get a school leaving exam and a [university] diploma; i.e. some education without a targeted preparation for a profession. This is why we have a lot of educated but little-qualified graduates.”

According to Holeček, the needs of the labour market were defined for the first time last year, and now the schools are expected to respond. Moreover, there are plans to introduce some polytechnical forms of education in primary schools and implement elements of dual education, specifically by involving companies in the education process so that students attain practical education directly in the companies.

Miklánek, pointing to Slovakia’s economic growth, said that in terms of the labour market, Slovakia is approaching a pre-crisis situation and that there is the threat of a shortage of qualified people for open work positions.

“Many companies have begun investing in their own education centres and on-the-job-training in order to have enough qualified people with the required level of education,” said Miklánek.

While Sirota of McRoy expects that the shortage of specialists will continue, as “nothing fundamental has been done to remove it”, companies and industrial associations hope that their own activities, as well as their close cooperation with the Education Ministry, will bring results. ITAS hopes that ICT companies in Slovakia prepared to employ some thousands of IT workers will not lose patience and turn to other markets, according to Budinský.

“It is high time to put down the rose-tinted glasses and realise that Slovakia is losing its attractiveness increasingly faster,” said Budinský, adding that while in the past Slovakia was attractive due to its cheap and qualified labour force, this is no longer the case.

Maxin is not optimistic, pointing out that studying at a technical university is demanding.

“I think that the trend in the deficiency of specialists will continue as today we already see that not only in Slovakia, but also in Germany, there is a shortage of a large amount of specialists in several fields, and Germany can offer these workers incomparable terms compared with Slovakia,” said Maxin.

Holeček views a qualified labour force as a basic condition for Slovakia’s competitiveness and hopes that measures already taken, as well as those which are planned, will help.

“Two years ago we began transforming the secondary vocational education system, starting already at primary schools, while its outcome must be preparing [people] for occupations and not getting a certificate,” said Holeček. “We assume that by 2020 we will manage to change this unfavourable state and that secondary vocational schools as well as universities will stop focusing on quantity, but focus especially on quality, which our industry, including our automotive [sector], needs. If we fail, Slovakia will no longer be competitive.”