THE DIVADELNÁ Nitra theatre festival tends to offer, in addition to fun and brand new performances from Slovakia and abroad, serious thought and pressing questions. After the past three years of focusing on deep social issues, the 23rd incarnation of the event targets the role of art in contemporary society. 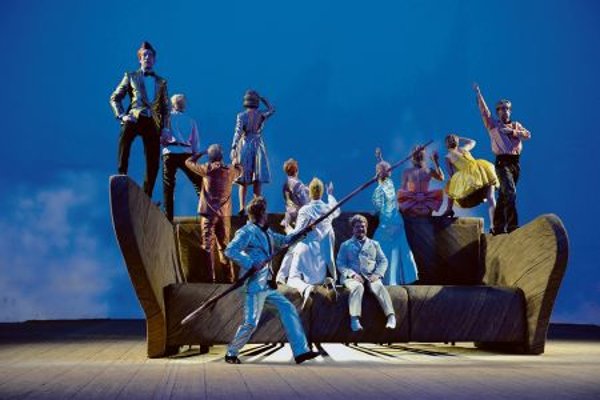 THE DIVADELNÁ Nitra theatre festival tends to offer, in addition to fun and brand new performances from Slovakia and abroad, serious thought and pressing questions. After the past three years of focusing on deep social issues, the 23rd incarnation of the event targets the role of art in contemporary society.

The festival takes place between September 26 and October 1 in the Karol Spišiak Old Theatre in Nitra. It offers 10 performances from Belgium, the Czech Republic, Hungary, Germany, Slovenia and, of course, Slovakia, in its main programme.

“We will bring theatre as a journey through history, theatre as an image of social conflicts, theatre as a political manifesto, theatre as a diary of the artist, theatre as a mockery of contemporary lifestyle, theatre as an image of the modern world and also as pure fun,” festival head Darina Kárová said. “We want to ponder the role of art, its chance to influence the character of a human and the state of society. We want to stress the importance of art when developing individual personality, its creative and economic potential. We want to talk about art which brings joy,
knowledge and enlightenment that cultivates thinking and helps understand the world’s complexity.”
The festival will open with a performance by the Volksbühne am Rosa Luxemburg Platz theatre of Berlin. Authored and directed by eccentric actor-turned-director Herbert Fritsch, the “Untitled No 1 / Opera” is an original comic opera full of many diverse phenomena, including slapstick humour, French-style miming, cabaret and video-art. The orchestra includes curious instruments like rattles, music boxes, toys, a saw and more. This performance is by far the most technically demanding in the festival’s history, requiring a gigantic sofa, 150 lights and more than two kilometres of cables. The gags and sketches are funny, but also reflect on life at the beginning of the 21st century.

The Slovenian staging “Sokol!” (Falcon!) by choreographer Iztok Kovač and performer/director Janez Jan-ša, revives the cult work of Kovač from 1991 and explores dance, physical aging and a sense of art through the means of contemporary dance and physical theatre.

Hungarian actors led by Béla Pintér will provoke with a piece mocking the joint Slovak-Hungarian history in their “Kaisers TV, Ungarn”, while Pintér himself plays legendary Hungarian (with a Slovak background) revolutionary poet Sándor Petöfy.

Prague-based theatre Divadlo Na zábradlí brings a drama that won the award for the best Czech piece of 2014, “Zlaté šesťdesiate alebo Denník Pavla J.” (Golden Sixties or Pavol J. Diary), the cult diary of film director and scriptwriter Pavol Juráček, one of the representatives of the Czechoslovak New Wave who not only fell into conflict with society, but also sometimes his own bohemian nature.

The last foreign theatre piece is “Book Burning”, the highlight of Flemish theatre in 2012, by Belgian performer and playwright Pieter De Bruysser, who contends with a mosaic of contemporary global problems – information overload, the crisis of capitalism, unemployment, youth dissatisfaction – as seen through the eyes of a cat. The stage designer (the set consists solely of a huge coffer) is Hans Op de Beeck.

Slovak dramas, as selected by the curator, director and art manager of Andrej Bagar Theatre in Nitra, Svetozár Sprušanský, include “Europeana – A Brief History of the 20th Century of the Slovak Chamber Theatre in Martin”, directed by Jan Luterán; “Evidence of Blood” directed by Agnieszka Olsten and performed by State Theatre Košice; “The Kindly Ones” by Jonathan Little of the Slovak National Theatre’s drama section, directed by Michal Vajdička; Gerhard Hauptmann’s “The Rats” by the Andrej Bagar Tehare, as directed by Roman Polák; and Karl Marx’s “Capital” as adapted for the stage by Peter Lomnický , played by the Aréna Theatre from Bratislava and directed by Martin Čičvák.

The Festival Plus section, which enhances the main offer with hints of non-mainstream or independent culture, brings a circus version of the famous “The Master and Margarita” by Teatro Tatro, a contemporary dance by ALT@RT from Prague, and the staging of a re-enactment of the cult film “Dogville” by Lars von Trier, performed by the Karol Spišák Old Theatre from Nitra, as well as the children’s opera “2’16” and a Half: Space Odyssey” from the Stanica Žilina-Záriečie culture hub.

Accompanying events include simultaneously interpreted debates on theatre, street performances, art installations, events, workshops, concerts and events for children. The plays have English subtitles. The full programme can be found at the nitrafest.sk website.