THE CHILDREN’S opera called 2’16” and a Half: A Space Odyssey is in fact a spirited game played with the audience. Yes, the title references John Cage’s famous composition 4’33”, and yes, it was inspired by Stanley Kubrick’s cinematic cult-classic. But the piece ventures beyond these and is hardly a traditional opera, not to mention that it is adults, rather than children, who can fully appreciate the references and ironies embedded in the work of contemporary Slovak composer Marek Piaček. 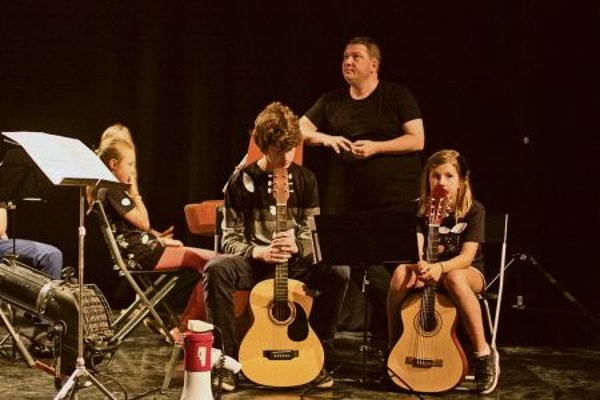 THE CHILDREN’S opera called 2’16” and a Half: A Space Odyssey is in fact a spirited game played with the audience. Yes, the title references John Cage’s famous composition 4’33”, and yes, it was inspired by Stanley Kubrick’s cinematic cult-classic. But the piece ventures beyond these and is hardly a traditional opera, not to mention that it is adults, rather than children, who can fully appreciate the references and ironies embedded in the work of contemporary Slovak composer Marek Piaček.

This musical work, based on improvisation and the individual character of each show, was not so much made for children, as by them. They play instruments, sing, dance, tell jokes and discuss Stephen Hawking and the Universe. But they also helped conceive the dramaturgy and the script, and by improvising, they have a hand in creating the piece’s final form.

The work was made for the Stanica Záriečie-Žilina centre of independent culture, but has been already shown elsewhere, and will be performed in the Festival Plus section of the Divadelná Nitra theatre festival on September 28, and for schoolchildren on September 29. It will be played in the Slovak Philharmonic in Bratislava on November 14 within the Music Academy series, and on November 15 in the Family Concerts cycle.

Piaček, when asked about the origins of the piece, told The Slovak Spectator: “The whole project connects to long years of work with children in various workshops at the Stanica.”

He further explained that the workshops in which he was involved (film, photography, sound, etc.) produced sounds for animated films, “and only some of the children could play an instrument, so the training was more focused on non-musicians, on various voice-band effects, percussive sounds, electronic instruments, etc”.

Other musicians, like Peter Vrba from Prague and Hankil Ryu from the Republic of Korea, also participated in these workshops. Gradually, the emphasis shifted to creating music.

“In some workshops even Korean children have participated; and thus, interesting works of art were generated that could have met the criteria of contemporary chamber music,” Piaček said. “We put great stress on improvisation and the ability of the children to react in real time to various situations,” he explained, adding that in this way, several performances appeared that were performed at the end of the workshops. In some, even children from more distant elementary schools of art from the towns of Bojnice and Handlová participated.

In 2013, Stanica got involved in the international grant project Karaoke Europe, and people around Piaček decided to put on a musical performance exclusively with children playing musical instruments.

“We started searching to find at least 20 members for an orchestra who can play,” Piaček says. The basic pool again consisted of their “regulars”, but then children from the Elementary School of Art of Árvay in Žilina and from Rajec joined them, too. Thus, they gradually became an orchestra, which since January 2014 consists of about 25 children who can all play an instrument, albeit at different levels of mastery. The age span is from eight to 15.

“The fundamentals for the opera were artistic, literary and animated works of children from previous workshops, focused on ‘modern urban folklore’, be it urban myths or horror stories,” Piaček explained.

“When preparing the opera, we lectured the children on grand symphonic and operatic works (Mahler, Shostakovich, Richard Strauss, Stravinsky), experimental contemporary music (John Cage, the Fluxus movement) … We also tried to clumsily imitate these works. I composed some of the tunes ad hoc, to help us train in harmony, coordination and concentration.”

The opera’s lyrics were also written using the individual skills of the children, who were encouraged to do what they do best, and thus the part in which a little girl narrates her theory of how the Universe came to exist – while showing her admiration for Hawking – was born, as well as the fluent flow of jokes made by the pianist.

“Gradually, we adults became aware of the fact that the hardest part is to keep the children’s concentration and to keep them silent at least for a while,” Piaček continued. “Thus the idea of the opera’s main theme was born – to do a composition of John Cage’s 4’33’’, which means ‘playing silence’ for this period of time. We found this impossible, and so a parody of this piece was born: the ‘children’s portion’, 2’16’’ and half.”

“The most parodied symphonic composition was the Introduction to the Symphonic Poem by Richard Strauss, Also Sprach Zarathustra (Thus Spoke Zarathustra), used by Kubrick in his A Space Odyssey,” Piaček explained, “and so the title came into being.”

The composer further described the various trials, like getting a balanced composition of instruments, as most children played recorder (flute) and piano (and obviously, only two can play one piano at the same time), as well as bonuses, citing the cordial and open involvement of three adult members of the Slovak Philharmonic.

Within Karaoke Europe, the “space travellers” performed in Prague and Brno, where the Multiplace Festival organised an improvised staging that was enjoyed by both children and adults alike.

“When creating the opera, we made sure the children had the main role in the work,” Piaček explained. “They wrote the texts, decided what to use and when. We supervised it and led them, of course; but jointly, from their groundwork, we created the basic structure of the opera. When rehearsing, there were also more of us overseeing the work, and so it happened that about five of us are listed as creators, as it is impossible to say who made the libretto, who the stage, who the choreography and who directs the opera,” the composer and conductor said when describing the collaborative efforts.

Piaček concluded that this project differs from ordinary children’s projects because of the emphasis on the creative involvement of the children themselves. So if he were to repeat something similar, he would again leave the theme and structure to the children, with the adults responsible for the fine-tuning.

“I would hate to first write something only to then force children to drill and rehearse it,” the composer said. “When we invite children to the creative process, it is much more fun: also for us adults.”

He conceded that he is now working on another opera for the Slovak Radio, which could be a kind of sequel, with the working title of A Brief History of the Universe.