YOUNG motorbike rider Tomáš Paulíček set the first Slovak record for the distance at which he rode a motorbike on its front wheel. 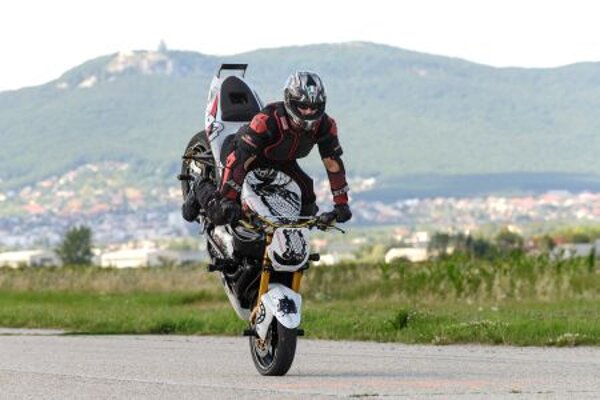 YOUNG motorbike rider Tomáš Paulíček set the first Slovak record for the distance at which he rode a motorbike on its front wheel.

In late July, he drove 138.7 metres on his specially adapted Kawasaki ZX6-R Ninja at the Nitra airport in Janíkovce. He lifted the bike on the front wheel at a speed of about 130-140 kilometres per hour.

The front wheel has no actuator, which allowed him to perform the stunt, and accounts for the “difference [in distance] between the record in riding on the front wheel and on the back wheel of a motorbike, which is about 30 kilometres,” Igor Svítok of the Slovak Records told the TASR newswire.

The 138.7 metres constitute a Slovak record, as no one else in the country has attempted such a feat.

Paulíček, from Nitra, has been riding motorbikes since he was 10. Throughout his nearly 10-year long (and counting) career as a stunt rider, he has ridden in several parades, exhibitions and festivals, and as a competitor at the Slovak stunt riding championship, where he placed in the top three.

He also rode in a music video of Slovak band Kontrafakt, and he competed in the Czecho-Slovakia Has Talent TV show.