A UNIQUE titanium implant produced with 3D printer technology was used by Košice doctors and scientists for the second time to reconstruct a portion of the skull of a patient. 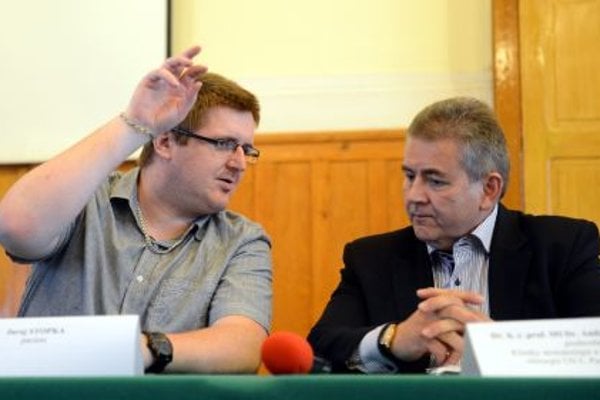 A UNIQUE titanium implant produced with 3D printer technology was used by Košice doctors and scientists for the second time to reconstruct a portion of the skull of a patient.

Juraj Stopka, aged 33, suffered a debilitating head injury nine years ago, for which he finally underwent surgery three months ago. Unable to talk or walk and completely reliant on care by others, Stopka has made a full recovery and surprised doctors with a challenge to play a game of chess, a development which they describe as beyond their wildest expectations. The operation was performed without complications.

“During his recuperation, the patient surpassed our most optimistic hopes. He’s gradually recovering his lost capabilities,” Stomatology and Maxillofacial Surgery Clinic director Andrej Jenča told media on August 14. “Three months out of the operation, he’s communicating again, capable of independent physical movement and enjoying a will to live again,” the TASR newswire reported.

Stopka suffered the injury from a four-metre fall. Doctors had to remove up to one-third of the damaged cranial matter and replace it with a temporary acrylate implant which, however, began to increase pressure on the brain’s nerve structures and Stopka gradually lost his ability to communicate and later also his motor skills.

In 2013, Stopka’s family learned through the media about the first successful surgical operation performed at Louis Pasteur University Hospital in Košice using a custom-made implant. The team of doctors and scientists enrolled Stopka into a programme for the development and production of custom-made implants, run by scientists of the CEIT Biomedical Engineering Institute and Košice Technical University’s Biomedical Engineering Department, led by Jozef Zivčák.

Stopka praises the operation, reporting a radical improvement. “I’m great and completely headache-free,” he told reporters. The implant, with a width of 1.5 millimetres and weighing 125 grams, covers 34 percent of Stopka’s cranial bones. A total of 21 screws with a diameter of 1.2 millimetres were used to fix it in place.

In 2013, a 52-year-old patient underwent the first successful operation with the new technology. The custom-made implants for facial and cranial bones cost between €10,000-32,000, with the costs covered by health insurance. The production of implants in Košice is part of an EU-funded project.