SUPREME Court Judge Daniela Švecová will succeed Štefan Harabin in one of the most powerful judicial positions in the country: the Supreme Court’s top chair. Švecová was elected by the Judicial Council, a top body overseeing the operation of Slovakia’s judiciary, on September 16 in a closely watched vote after 11 of the 15 voting members cast their ballots for her. 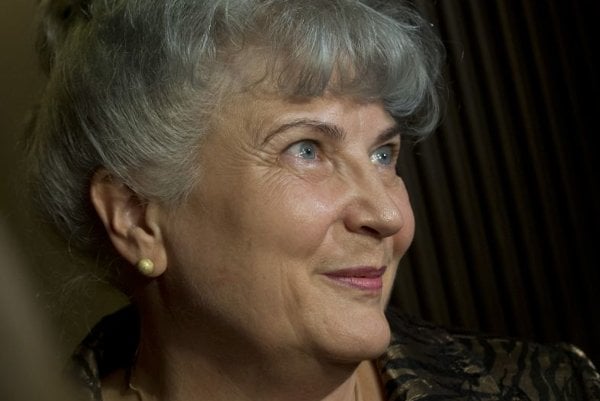 SUPREME Court Judge Daniela Švecová will succeed Štefan Harabin in one of the most powerful judicial positions in the country: the Supreme Court’s top chair. Švecová was elected by the Judicial Council, a top body overseeing the operation of Slovakia’s judiciary, on September 16 in a closely watched vote after 11 of the 15 voting members cast their ballots for her.

Harabin, who has been showered with criticism from political ethics watchdogs, activists and a number of judges for the way he ran the top court and his negative influence on the country’s judiciary, left his post when his term ended on June 22, and the seat has been vacant ever since. President Andrej Kiska is in charge of appointing the newly elected candidate to the post.

The stakes were high for Harabin’s many critics, since if the Judicial Council had failed to elect the president in the second round, a potential third round would have been open to the candidates who failed to win in the first round, including Harabin.

Švecová, a former deputy chairwoman of the Supreme Court, was elected in the second attempt on September 16 after she beat Supreme Court justice and former state secretary of the Justice Ministry Daniel Hudák, who advanced along with her to the second round that day. Supreme Court Justice Ivan Rumana also ran for election in the first round of the September 16 vote.

While Švecová’s candidacy was put forward by the council of judges at the Trnava Regional Court, Hudák was proposed by the judges of the Supreme Court and Rumana nominated himself. The Trend economic weekly broke the story on Rumana’s candidacy, describing it as “unexpected” and his self-nomination as “unusual”.

The election was closely watched by judicial ethics watchdogs, the media and the international community. Ambassadors of the United States, the Netherlands and Ireland, for example, along with representatives of the embassies of France, Great Britain, Finland and Croatia were watching the election as well, according to the Sme daily website.

Meanwhile, the Judicial Council also elected Jana Bajánková as its head on September 16 after 10 of the 16 voting council members voted for her in a secret ballot, Sme reported. There were no votes against, while six members of the council abstained from voting.

Bajánková, who failed in the first-round bid for Supreme Court head as nominated by Justice Minister Tomáš Borec, takes over the post previously held by Harabin, who also served as president of the Supreme Court. However, a recently passed constitutional amendment divided the post of Supreme Court president from the position of Judicial Council boss as of September.

“I want to assure everyone that I will be pushing for the interests of all the judges,” Bajánková, the sole candidate for the post, said after her election, as quoted by the TASR newswire.

Švecová studied law in Bratislava between 1969 and 1974 and started her career as a judge at the Trnava District Court, while in 1981 she moved to the Bratislava Regional Court. Švecová has been a judge of the Supreme Court since 1990; between 2005 and 2010 she served as deputy chairwoman of the court. She even led the court for a couple of months after October 2008, during a time when the court was without an elected chairman. Between 2007 and 2012, Švecová was a member of the Judicial Council as a nominee of former president Ivan Gašparovič, Sme reported.

She served on the Judicial Council in 2009 when Harabin was elected to lead the Supreme Court, and she did not vote against the him when he went straight from serving as Justice Minister, as a nominee of the Movement for a Democratic Slovakia (HZDS) party of Vladimír Mečiar, to the top court. Yet after 2010, according to Sme, Švecová started to publicly distance herself from Harabin’s style of managing the judiciary.

Harabin tried and failed to get re-elected in the first round of voting that took place in mid-May, as did his rivals: Zuzana Ďurišová, who represented judges who are critical towards Harabin, and Bajánková.

At the beginning of the Judicial Council session, the members discussed whether or not they could elect the new Supreme Court president and its chair since they are short one member. According to the law, there should be 18 members, but after Harabin left, the council had only 17 members. The council finally decided that its members would vote to fill the empty posts, the SITA newswire wrote.

The date of the election was set by Harabin shortly before his term expired, while newly-elected vice-head of the Judicial Council Ján Vanko in one of his first moves changed the location proposed by Harabin from the remote town of Spišské Hanušovce to Bratislava.

One week ahead of the election of the Supreme Court president and Judicial Council head, parliament dismissed Dušan Čimo as a member of the Judicial Council, which picks the heads of both bodies, and replaced him with the head of the district court in Spišská Nová Ves, Ján Slovinský, on September 11. Deputy speaker of parliament Jana Laššáková of the ruling Smer party proposed the dismissal, which was passed with Smer’s support, while the opposition ignored the vote.

Čimo, elected in February 2012 by the rightist parties, is a long-time critic of Harabin and has not refuted claims that this could have been the reason for his dismissal, which in fact was believed to have shifted the balance of power in the council before the elections.

Opposition MPs further called the move a deliberate effort by Smer to secure votes for the upcoming election for the new Supreme Court and Judicial Council head, SITA wrote.

Neither Laššáková nor other Smer MPs have offered an explanation for her step.

“Considering the current practice in the Supreme Court there is no need to specify the reason for recalling a Judicial Council member,” said the head of the Slovak parliament’s constitutional committee, Róbert Madej of Smer, as quoted by TASR. “Even President Andrej Kiska, who recalled three members of the Judicial Council, approved this practice; the government also recalled one council member recently.”

Meanwhile, the government elected its own nominee to the Judicial Council, appointing barrister Ján Havlát, founder of the Havlát&Partners law firm and a member of the board of the Slovak Bar Association. Havlát took up the post on September 11, replacing Jaroslav Chlebovič, whom the government dismissed on August 20, TASR wrote.