SLOVAKIA’S automotive industry, a pillar of its economy, cannot grow and stay competitive without research and development (R&D). But with the parent companies of carmakers in Slovakia keeping R&D in their home countries, it is up to the auto sector’s contractors to build R&D centres here. With the role of these contractors expanding, some have responded to this call and launched R&D centres in Slovakia. Slovakia’s auto industry welcomes this development and is calling for the launch of a national technological institute for which R&D would be its core business. 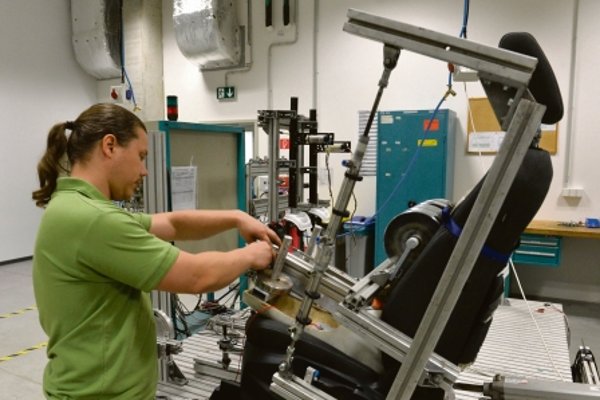 Carmakers in Slovakia - Volkswagen Slovakia, PSA Peugeot Citroën and Kia Motors Slovakia - are currently at the limit of their production capacities, producing almost one million cars annually. Impetus for further development of Slovakia’s auto industry might be the arrival of a fourth carmaker. But as this remains unlikely, Slovakia’s auto industry must continue to grow through the development of subcontractors.

“Our strategy leads toward this goal, i.e. to secure further subcontractors,” Jaroslav Holeček, head of Slovak Automotive Industry Association (ZAP), told The Slovak Spectator. “For further development of subcontractors there are three basic conditions [to be fulfilled] – qualified people, applied research and development and a highway to Košice.”

Jiří Šimara, an analyst with Cyrrus in Slovakia, sees Slovakia’s chances of winning R&D investments from big carmakers as small.

“Large international companies are very reluctant to do research somewhere other than in their home country,” Šimara explained for the Hospodárske Noviny economic daily. “The export of research does not result in such high savings in the form of reduced wage costs as in the case of production. Moreover, it would not be a good step from a marketing point of view, either. Volkswagen in Germany or Peugeot in France would advocate only with difficulty calling them domestic carmakers after moving research and development [abroad]. Thus I do not expect that any significant investment will be approved [for Slovakia] in the foreseeable future.”

Holeček agrees with leaving space for the arrival and development of the automotive subcontractors’ sector in Slovakia. Local subcontractors supply 40 percent of components for carmakers in Slovakia, while they export the remaining 60 percent. ZAP would like to see a bigger share of supplies from Slovakia, as this reduces logistics costs and increases flexibility of supplies.

He also pointed out the changed role of contractors. While in the past carmakers assembled cars from supplied parts and components, it is contractors who now supply whole systems and modules.
“Today, when a carmaker wants a front mask, it does not order it from a contractor by giving it a detail drawing,” said Holeček. “The carmaker gives the contractor a design drawing of the car and asks it to develop the front mask including the buffer, lights and all that is linked with it.”

According to Holeček, the automotive industry has gone down a certain path over the last 10 years and now it has found itself somewhere else.

Those large international contractors have already begun launching their R&D centres in Slovakia.

“They see here their potential market, and when they want to be active in Slovakia they need to partially move their research and development to Slovakia,” said Holeček.

“The Johnson Controls technology centre in Trenčín is an important part of our global research and development network for automotive seating and interior products,” said Rainer Schaab, the vice president of European Johnson Controls Automotive Seating, as cited in the press release. “We have invested in this new facility in order to offer our employees a state-of-the-art working environment and to accommodate potential future growth.”

The new facility is 11,000 square metres in size. With approximately 480 employees, Johnson Controls operates in Trenčín the largest technology centre for the automotive industry in Slovakia. Its team provides services in the areas of development, testing and benchmarking of complete seat systems and seating components for cars, as well as interior components such as instrument and door panels, floor consoles and overhead systems. The employees in Trenčín work for Johnson Controls as well as its customers, the automakers, around the world. The centre was established in 2004 and is one of the company’s 14 technology centres worldwide for automotive seating and interior solutions.

According to Schaab, Slovakia is an important business location for Johnson Controls, which with more than 5,500 people, is one of the largest employers in Slovakia.

Plastic Omnium Auto Exteriors opened its automotive development centre in Lozorno near Bratislava on October 11, 2013. It will work primarily with German carmakers, the company states on its website. With 1,300 square metres of office space and 300 square metres of laboratories, the centre employs a team of 110 engineers and technicians from eight different countries and will be able to accommodate up to 160 employees.

“We decided so because of especially two reasons,” the company said back in October when explaining why they opened the centre. “The first one is that we want to be closer to clients. Costs on development will decrease too.”

The centre hosts the main support services for the industrial development of automotive projects: computer aided design (CAD), styling, product engineering, industrial engineering, quality control, sales and purchasing. It works closely with the Sigmatech research & development centre, and technological cooperation agreements have also been signed with the universities of Bratislava and Košice in Slovakia and Zlín in the Czech Republic.

Matador, one of the largest Slovak subcontractors of carmakers, is building a new R&D centre in Bratislava.

“Our goal is to return development and research activities for the automotive industry in Slovakia via our development and designing capacities to where they have historically been,” Matador wrote in a press release in April when unveiling its plans to build a top technological centre.

Martin Kele, general director of Matador Holding, added for The Slovak Spectator that there are ideal conditions for building such a centre around Bratislava.

“Here are localised automotive producers and a sufficient personal basement for attracting ‘brains’,” Kele said when explaining why they decided to build the new development centre in Bratislava. “The long-term strategic goal of the Matador group is to develop especially the division of development and the decision to carry this out in Bratislava is a logical result of the need to be as close as possible to our client.”

For the time being, Matador is completing the building where the centre will be located. In the centre, Matador wants to focus primarily on the development of technologies for the automotive industry.

“With respect to the fact that automotive development is presently localised in parent companies of individual carmakers, we want to concentrate on machine-technological equipment used in the automotive industry,” said Kele, adding that its clients should primarily be carmakers and TIER 1 contractors. They also want to gradually extend the scope of their operation into other industrial branches.

What Holeček sees as important for the Slovak automotive industry is securing development of local, Slovak subcontractors while an inevitable condition for this is that they each have an R&D centre or a technical development centre, at least.

“Because the applied research was almost completely destroyed or halted over the last 20 years, there is actually nothing to return to and we have to build a new R&D base for the needs of the industry,” said Holeček.

In Slovakia there are three groups of R&D institutions: the Slovak Academy of Sciences, universities and R&D private companies, explains Holeček. While the Slovak Academy of Sciences is especially active in basic research, universities are not able to meet the requirements of the industry in this respect. Thus, few private R&D companies that have survived in Slovakia remain. But what Holeček sees as a big disadvantage is that they operate independently and each within their own field.

Henrieta Tomašcová, strategy marketing manager at CEIT in Žilina, agrees, saying that the share of Slovak contributions to science and research resulting in innovations is very fragmented and more random than systematic.

“It reflects the lack of conceptual courses during the transformation period of Slovakia’s economy in the whole innovation chain,” Tomašcová told The Slovak Spectator.

According to her, there are some scattered positive examples such as faculties of mechanical engineering, electrical engineering and management science and informatics at Žilina University, the Institute of Materials and Machine Mechanics of the Slovak Academy of Sciences, EVPÚ Nová Dubnica, Prvá Zváračská in Bratislava, Matador Bratislava and others.

She believes that fulfilling the Strategy of Smart Specialisation of Science and Innovation, which the Slovak cabinet adopted last November, would help. But a discussion about the action plans for this strategy has been on hold since May.

“Here the whole and compact system of governance of science and innovation in the automotive and machine engineering industry is clearly processed,” said Tomašcová.

For ZAP, building an institution sheltering applied research and development is hugely important, according to Holeček, seeing the German Fraunhofer institute or Finnish VTT Technical Research Centre as examples of such institutions for which R&D is the core business.

There have already been efforts to launch a national technological institute, which will also serve other industrial sectors in Slovakia, not only the automotive industry. He believes that the launch of such an institute is in the interest of Slovakia because research and development is one of the basic conditions for securing Slovakia’s competitiveness. But efforts to build the institute are being met with disunion among employers over the need to have such an institute and too little effort from the state to push for its launch. ZAP has an idea to launch at least a strategic centre of R&D and innovations for the automotive industry, which will be a kind of vanguard or one part of the national technological institute.

“Unfortunately, I have to say that for now [the launch of the strategic centre] is only an idea: wishful thinking,” said Holeček. “But we will not back away because development, especially that of subcontractors, has the priority.”