BEFORE the opening of the new 2014/2015 season in the Slovak National Theatre (SND), its general manager Marián Chudovský praised the last season and summed up that it was a big success, as seen not only in the number of visitors and tickets sold, but also in the artistic level of the performances. 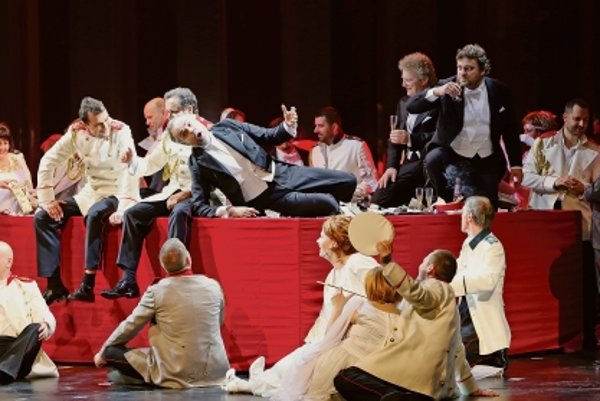 BEFORE the opening of the new 2014/2015 season in the Slovak National Theatre (SND), its general manager Marián Chudovský praised the last season and summed up that it was a big success, as seen not only in the number of visitors and tickets sold, but also in the artistic level of the performances.

This is, however, also a challenge to make the upcoming season as good as the previous one, Chudovský added. The new season is the first one to be completely drafted by the new management, as it always takes some time to change the dramaturgy and plans set by the predecessors.

The 2014/2015 season opened on September 12 with a gala concert dedicated to the 60th birthday of basso Peter Mikuláš, and with the Open Day on the following day.

Foreign guest performances and international co-productions and projects are a big attraction for visitors. The famous St Petersburg Eifman Ballet will put on two performances on October 21 and 22, offering a theatrical view of the life of famous French sculptor Rodin in an eponymous play. The Koren(i)e súčasného tanca (Roots / Spices of Contemporary Dan-ce) project will bring prominent Slovak dancers and choreographers who have established themselves abroad.

In opera, Slovak soloists now engaged in foreign theatres will give guest performances. In drama, the joint project with the Deu-tsches Theater from Berlin Art of Ageing brings the play Blu-dičky / Land der Ersten Dinge at the end of November.

The play of reputed US theatre director and author Robert Wilson, called 1914, showing the twists and turns of World War I in an innovati-ve way, is a Czech-Slovak-Hu-ngarian collaboration and is intended for an international audience. The Slovak premie-re (and later two re-runs) is scheduled for October 28.

This play, despite being international, fits well into the theme of the SND’s drama for this season – Slavonic and Slovak history. From Great Moravia, the Slovak enlightenment and the national awakening of the 1840s, to two world wars and their impact on this country, new plays which are to premiere in the National Theatre reflect on these Slovak events, in ways ranging from humorous, ironic, poetic, true-to-life and innovative. Some of the plays (e.g. Jane Eyre, Leni, The Jurga Brothers, Carpathian Thriller, Illusion, The Kindly Ones, Buddenbrooks, Rechnitz – the Angel of Death, Madame Bovary, the Ten Commandments) come with subtitles. The National Theatre Live project will continue to bring live broadcasts from the London National Theatre in their original form, with Slovak subtitles.

Operatic premieres will celebrate anniversaries in the world of music (Salome by Richard Strauss commemorates his 150th birthday, conducted by the head of SND opera, Friedrich Haider, and dir- ected by Hans-Joachim Ruck-häberle); demand for operettas (The Land of Smiles by Franz Lehár, directed primarily by drama director Juraj Nvota); the previous success of Charles Gunaud’s work (Ro-meo and Juliet, conducted by Rastislav Štúr and directed by Slovenian dramatic director Diego de Brea); and a thirst for new pieces (“a forgotten jewel of opera”, as Slavomír Jakubek of the SND opera dramaturgy described The Jewels of Madonna by Ermanno Wolf-Ferrari, conducted by Friedrich Haider and directed by Manfred Schweigkofler).

A new project aims to present shows to students and young graduates of the Operatic Studio of the SND. In June, the opera King Theodore in Venice by Giovanni Paisiello will be conducted by Marian Lejava and directed by Lenka Horinková.

Jakubek also noted that the SND opera’s concept is to “revamp” some of the pieces “put deliberately on ice”, and in this season, it will be Bellini’s I Puritani and Leoš Janáček’s opera Jej pastor-kyňa, premiered at the SND in 2012 under the title Jenúfa.

The first dance premiere will be the “first Slovak ballet”, the music of which was composed by Eugen Suchoň, and which will be adapted by Rudolf Pepucha and choreographed and directed by Mauro de Candia. The piece will be first shown on Sep-tember 28 within the Bratislava Music Festival.

The From Fairytale to Fairytale piece is an adaptation of Oskar Nedbal’s music score, and it aims to address an audience of children and increase their future audience, which is one of the main goals of the National Theatre, as stated by Chudovský.

The highlight of the ballet season will be the premiere of a “grand ballet opus”, Corsair, or Le Corsaire, by Adolphe Charles Adam. This performance means a change to the original dramaturgy. Head of the SND’s ballet, Jozef Do-linský Junior, explained that it was the dancers themselves who wanted to get a chance to show their full talents and abilities in a host of big characters.

More information about all the premieres, re-run stagings, guest performances, exhibitions and special events can be found – also in German and English – on the snd.sk website, or in the yearbook that can be purchased in the ticket offices.