Marrying for the land 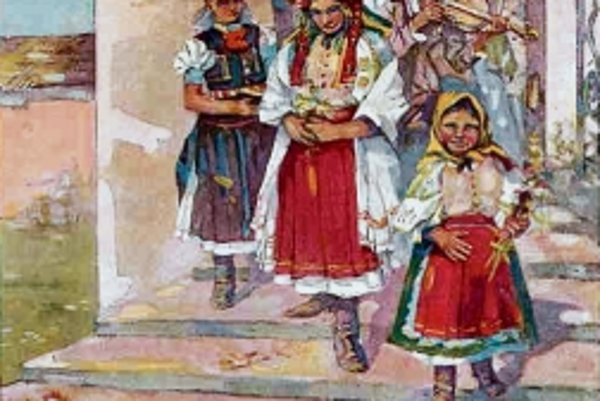 This postcard, published by Olomouc-based Romuald Promberger, featuring August’s painting Leaving a Wedding, shows a bride in festive folk attire leaving the church after her wedding, in the municipality of Dačov Lom.

In the past, land ownership was a crucial factor among big farming families in the countryside when selecting a potential spouse. People would say that the bride could be a goat, but “as long as she had a ‘šéska’”, meaning a plot of farmland, that was all that mattered. The headpiece worn by the bride here indicates that she may have brought some land into the marriage.

Rather than head directly to the church, wedding processions often used to snake through the narrow village lanes. This was partly due to an old superstition that taking the same path to and from the church for a wedding brought bad luck. The religious authorities sought to combat these ancient rituals, as they were pagan in origin. A decree by the Štítnik synod required that people head directly to the church and return along the shortest possible path.

On the way back from a wedding, local boys would sometimes block the procession with a bar or a ladder and ask the groom for a ransom for taking their girl. The ransom usually took the form of a bottle of liquor, which, once produced, allowed the wedding guests to continue on their way.