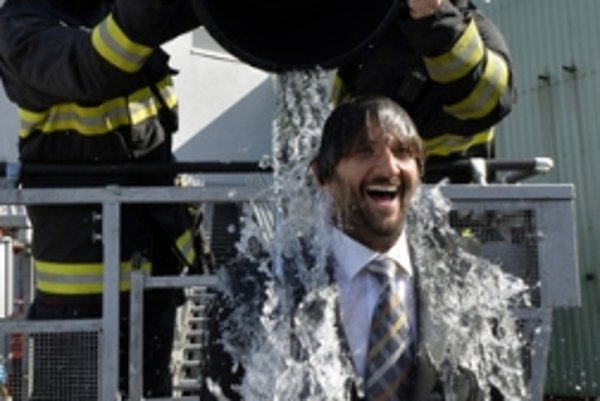 The initiative went viral on social media over the summer and was started in the US. It involves challenging a friend or relative to choose between having a bucket of ice water poured over his of her head, or donating money towards ALS research, and many do both. Kiska was given the challenge by Slovak tennis champion Dominika Cibulková, and he uploaded video footage of his dousing on Facebook.

“The whole campaign looks like fun, but it’s not, actually,” Kiska wrote on his network profile, as quoted by the TASR newswire. “It’s [ALS] an extremely serious disease of neurons in the brain, due to which the patient loses control over his or her muscles. I am always ready to help when I can. To pour an ice-cold bucket over my head is the least I can do for people suffering from this disease.”

The president said he plans to find an association that helps ALS patients, or people suffering from it themselves, and assist them financially. Kiska, after participating in the initiative, passed the challenge on to Slovak ice hockey player Peter Bondra, cyclist Peter Sagan and Good Angel charity director Ján Dobák.

The initiative started in the US, where former baseball player Peter Frates was diagnosed with ALS in 2012 and wanted to draw attention to the disease. Major League Baseball players were the first to join the Ice Bucket Challenge, with National Hockey League players and other athletes soon joining the cause.

It was Cibulková who brought the challenge to Slovakia, passing the baton to Kiska and various athletes, like basketball player Bronislava Borovičková and another famous tennis player, Dominik Hrbatý.

Slovak ice hockey players Marián Hossa and Tomáš Kopecký also got involved in the challenge, along with football manager Marek Hamšík and some of his colleagues, including Adam Nemec and Erik Jendrišek, in addition to dirt-track racer Martin Vaculík.

“We are enthused and surprised by the spontaneous initiative of Mr Ludvig,” Jaroslava Valčeková, chairperson of Nádej, told SITA. She further explained that the civic association runs a protected workshop, Scarabeus, where those suffering from the disease can manufacture certain products, which helps them increase their activities, and procure nurses for patients. Nádej will further report about the use of the donated funds on its sclerosis-multiplex.sk website.

Kiska, in addition to being doused with water, donated money from his August salary to two families selected by the Organisation of Muscular Dystrophy, allocating more than €5,000 to families in emergency situations. The president also met people afflicted muscular dystrophy and agreed to have the organisation added to the list of those which propose where his presidential salary should go.

The patients talked to him about barriers they meet that complicate their lives; and Kiska proposed that if they manage to deliver a list of arguments, he would initiate a meeting with the health or labour minister.

The head of the organisation, Andrea Madunová, told TASR that since the president accepted the Ice Bucket Challenge, 300 donors have given almost €18,000, which normally would have been only about €5,000. They will use the money to improve the lives of children and adults with muscular dystrophy, which includes various types of neurological-muscular diseases.