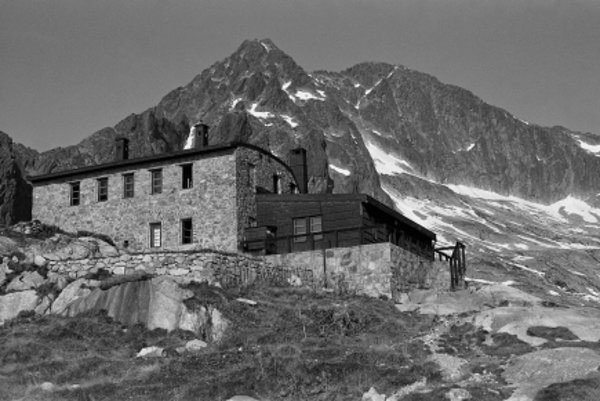 The chalet’s namesake, Edmund Téhy (1856-1917), is credited with developing hiking in the High Tatras. A doctor from Banská Štiavnica and an avid mountain climber, Téhy was also the chairman of the Hungarian Hiking Association. In 1896 he initiated the construction of the chalet. A portrait of Téhy hangs inside as a tribute.

The project was led by Jozef Pfinn and adapted to the alpine conditions by architect and builder Gedeon Majunke from Spišská Sobota. Building the chalet at such a high altitude proved difficult, and materials had to be brought up in phases by mountain carriers.

Téry’s Cabin, often called Terinka, changed owners several times. Former head of the mountain rescue service and mountain guide František Mrázik wrote that after the war, the Carpathian Association from Kežmarok unjustly claimed ownership, and only almost a decade later, it was taken over by the Club of Czechoslovak Hikers. Currently, it is owned by the Club of Slovak hikers and the Slovak Climbing Association, JAMES.

The chalet’s amenities were gradually upgraded over the years, with central heating added in the 1930s, along with a phone line and plumbing. Polish resistance fighters hid in the chalet, during a reconstruction in 1944, as did Russian refugees from prisoner-of-war camps, the TASR newswire wrote.

The façade was rebuilt in 1955, and in 1983-84, Terinka underwent an expansive reconstruction which retained its original appearance. Since 2005 its electricity has been generated via solar panels.

Professional carriers and cabin managers are an integral part of Terinka’s history. One has become a legend: Belo Kapolka worked there for 35 years, and also wrote fiction about life in mountains. He died in an accident on April 18, 1994 near Hrebienok. Miroslav Jílek, who until recently managed the chalet, has resigned, On September 17, Peter Michalka was selected to lead Terinka.