SLOVAKIA’S right wing parties continue to grapple with internal problems, weakening their ability to challenge the ruling Smer as well as confusing many of their own voters. Still, most of their supporters remain unlikely to shift loyalties to Prime Minister Robert Fico and Smer, experts say. 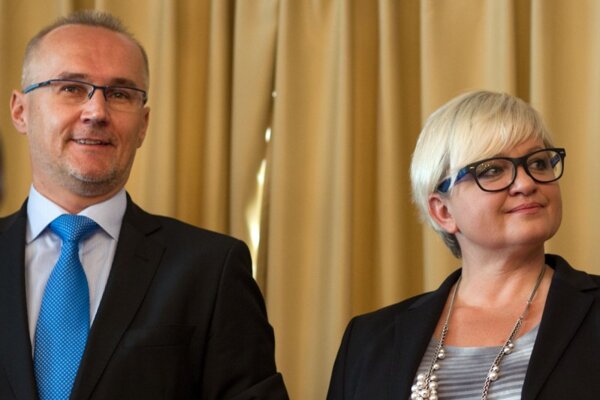 SLOVAKIA’S right wing parties continue to grapple with internal problems, weakening their ability to challenge the ruling Smer as well as confusing many of their own voters. Still, most of their supporters remain unlikely to shift loyalties to Prime Minister Robert Fico and Smer, experts say.

The Slovak Democratic and Christian Union (SDKÚ), which led the reformist forces after 1998 but now hovers around the all important 5-percent threshold in polls, is wrestling with a divide ahead of its party congress on September 27. Five of the liberals from Richard Sulík’s Freedom and Solidarity (SaS) who joined the NOVA party founded by Daniel Lipšic last year, are now leaving the party. Neither SaS, the party once part of a ruling coalition, nor NOVA, as measured by a recent poll would currently make it into parliament. Unsuccessful presidential candidate Radoslav Procházka has seen his party Sieť, after a successful takeoff, plunge in a recent poll, on the heels of accusations by Igor Matovič of Ordinary People and Idependent Personalities (OĽaNO) of attempting to finance his campaign off the books.

“While the weaker ability of the rightist parties to take action or oppose Smer might help Fico’s party, in terms of voters’ support Smer does not benefit from this situation at all,” political scientist Grigorij Mesežnikov, president of the Institute for Public Affairs (IVO), told The Slovak Spectator.

The sum of the electorate of right-wing parties is still bigger than that of Smer’s, Mesežnikov noted, adding that with the nearing parliamentary elections there will be more pressure on these parties to figure out this potential.

“It will take more than just internal fighting; it will take some understandable alliances,” he said.

The SDKÚ dropped in importance after the 2012 election and its already slim parliamentary caucus lost some of its heavyweights along the way, among them former justice minister Lucia Žitňanská, who recently joined another centre-right party, Most-Híd. More recently, the two founders of the party, Mikuláš Dzurinda and Ivan Mikloš, also left.

Ondrej Matej, a former MP and erstwhile advisor to former prime minister Iveta Radičová, is set to challenge incumbent SDKÚ chairman Pavol Frešo at the upcoming SDKÚ congress scheduled for September 27, the TASR newswire reported on September 22. Matej, backed by heads of the SDKÚ’s regional bodies from the Košice, Banská Bystrica, Prešov, Nitra and Žilina regions, says that the party got so entangled in its internal problems that voters no longer understand them.

Matej argues that Frešo promised to present changes to the party’s programme as well as personnel changes for the 2016 general election at the congress, and if he fails to have these approved he cannot stay on as chairman.

“We do not want to remove Pavol Frešo, but I cannot imagine that if he fails in his written commitment that he will remain in his post,” Matej said, as quoted by TASR.

Frešo, however, does not plan to clear the way to the party chairmanship earlier than in 2016, the year of parliamentary elections, while he said he would pass the post of election leader to current SDKÚ deputy chair Martin Fedor in 2015, according to TASR.

“I am elected for four years and I will not give up this post,” Frešo said, as quoted by TASR. “If they submit a proposal for my recall, I will deal with it, but if such a proposal comes, it will not be accepted, in my opinion.”

Meanwhile, in a surprise move, long-term head of the most popular private radio station, Radio Expres, Eva Babitzová has joined the SDKÚ, claiming that the party, which “has taken Slovakia from the hands of [Vladimír] Mečiar” deserves to survive: “It is now in crisis, but we believe it can return to the political map of Slovakia”.

Martin Slosiarik, director of the Focus polling agency, assumes that the current developments within the SDKÚ will weaken the party.

“The voters do not like to see when parties are devoting more attention to their internal problems than, for example, doing what they received their mandate for,” Slosiarik told The Slovak Spectator. “For the SDKÚ it is almost symptomatic that since the last elections they have been solving internal party crises regularly.”

Mesežnikov does not yet see a team within the SDKÚ, that would be ready to push through reforms, but rather people who have been expressing dissatisfaction with the situation in the party for some time and “now on the occasion of the congress they will try to accomplish their plans”.

“I admit, so far it is not clear to me what the programme should be that would internally revive the party and return to it its preferences,” Mesežnikov told The Slovak Spectator, adding that it perhaps all depends on what kind of leadership will be formed at the congress.

The SDKÚ has found itself in the most complicated situation since its establishment and by now it is clear that the party has failed to catch a second wind and achieve a restart after its defeat in the 2012 parliamentary elections, Mesežnikov said.

Mesežnikov, however, still believes that the party has the potential to appeal to enough voters to make it into parliament since there is still an ongoing regrouping of voters of the right-wing political spectrum.

As a brand, the SDKÚ still has its place on the political map, but the personnel that the party presents to the public is probably not fully acceptable, said Pavel Haulík of the MVK polling agency, adding that “it is very unpleasant to balance oneself at the edge of electability, which also makes it rather difficult to address real problems”.

“The SDKÚ as it is today might survive the next election and clear the 5-percent threshold, but in the same way it may not necessarily happen that way,” Haulík told The Slovak Spectator.

Meanwhile, the Sme daily in its September 24 issue reported that Matej, who also serves as the party’s treasurer, allegedly made the comment that even the bank to which the SDKÚ owes money is interested in a change in the leadership while avoiding naming the bank. Several SDKÚ members have confirmed this information for Sme. Matej, however, responded that he “in no way said it that way”. Sme reported that the SDKÚ owes €1.7 million to Privatbanka, which belongs to the portfolio of Penta.

Fedor meanwhile called on Matej to provide an explanation for hinting at someone trying to influence the developments within the party from outside, TASR reported.

The defectors cited the loss of the possibility to push for liberal values in their own programme faction within NOVA as the main reason for their departure.

Lipšic said that while the parting of ways with the group of five liberals happened on fair terms, the teaming up of NOVA and the liberals was a mistake.

“Voters made it clear to us that the union was not entirely comprehensible,” Lipšic said, as quoted by TASR, adding that NOVA was set up as a party with no clear ideological boundaries. “The problem is that factions emerged that were liberal and conservative, and this did not work.”

Meanwhile, SaS chair Sulík said that the liberal’s departure from NOVA proves that only the SaS can promote liberal ideas, as reported by the SITA newswire. Sulík also said that the eventual return of the deputies to the SaS would be assessed individually.

According to Mesežnikov, Procházka’s Sieť party is in a more favourable situation, even if Lipšic and Procházka had a similar genesis, as they came from a similar background. Procházka benefited from his presidential candidacy, Mesežnikov added.

Slosiarik suggested that by now it is clear that the alliance with the liberals has done nothing to strengthen NOVA’s electoral base.

“Ideologically, in many cultural-ethical issues the party had its hands tied, which many times was reflected in the behaviour of its politicians,” said Slosiarik, adding that on the conservative political arena there is considerable pressure and thus not even a clearer conservative line might be a guarantee for the growth of preferences.

Slosiarik does not assume that the recent developments will strengthen the position of any specific centre-right party and the support will more or less decline with part of the voters ending up in the camp of the undecided.