PLAYING judiciary musical chairs and giving Slovakia a more welcoming face for the country’s transatlantic partners is what has kept the country’s fourth, and still quite new, President Andrej Kiska busy during his initial days in office.` 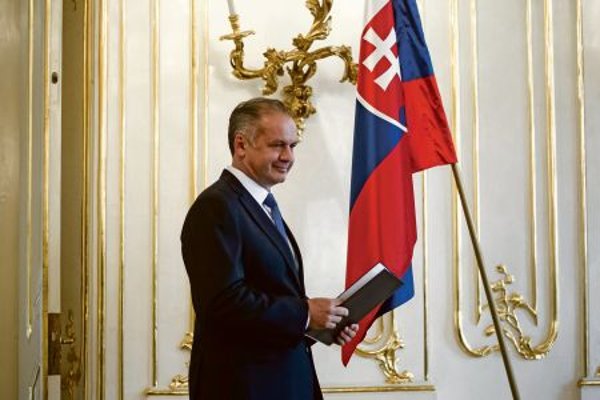 PLAYING judiciary musical chairs and giving Slovakia a more welcoming face for the country’s transatlantic partners is what has kept the country’s fourth, and still quite new, President Andrej Kiska busy during his initial days in office.`

“I think he took up his post rather promisingly and he is trying to turn from the non-partisan politician who was elected president into a statesman,” political analyst Grigorij Mesežnikov told The Slovak Spectator when asked to evaluate Kiska’s first 100 days in office, which he marked on September 22.

With a little more than three months in office, which he assumed on June 15, Kiska has shown his willingness to cooperate with the non-governmental sector, as was expected due to his background in charity. But he has also angered some NGOs, particularly those that presented him with a petition to hold a referendum on the so-called protection of traditional family. Rather than allow the referendum to proceed, Kiska instead chose to turn to the Constitutional Court to determine whether the four questions proposed for the referendum are in line with the country’s constitution. He is thus the first Slovak president to make such an inquiry with the court.

‘Court’ is definitely among the most frequently mentioned words when discussing the first 100 days of Kiska’s presidency, since he made it a priority at the start of his term to live up to at least some of his promises to make important changes in the judiciary.

Kiska was required to take a stance on big foreign policy issues early on, especially over the turbulent, ongoing international crisis in Slovakia’s neighbour, Ukraine, which has dominated foreign policy discussions over the president’s first 100 days in office. Notably, Kiska and Prime Minister Robert Fico’s views over foreign policy, particularly the Ukrainian crisis, have clashed, as the prime minister has voiced controversial opinions in connection with the conflict, repeatedly calling the US and EU sanctions nonsensical and harmful to Slovakia’s economy.

Kiska has thus found it crucial to reassure Slovakia’s EU and NATO partners about the country’s commitment to its obligations based on its NATO and EU membership, according to Mesežnikov.

“He publicly presented his opinions, which are in line with our official foreign policy strategy,” Mesežnikov said, adding that by doing so, Kiska confirmed that Slovakia is part of NATO and insists on a unified approach by the EU countries in this situation.

Such was the case at the recent NATO summit in Wales. Kiska admitted that due to Fico’s statements on the matter, he was asked at the summit whether Slovakia is siding with the Russian Federation.

“It is not pleasant when I come to the summit where there are presidents and prime ministers of dozens of states, our closest allies, and they start to ask questions about what is happening,” Kiska said, as quoted by the SITA newswire. “Are you really part of the EU’s core? Do you have some pro-Russian leanings? I received such questions.”

When it comes to representing the country on the rest of the world, the NATO summit was Kiska’s first major event. In addition to that, he represented Slovakia at the summit of the Visegrad Group, and has been on a number of bilateral visits. In line with tradition, he paid his first bilateral visit to the Czech Republic, and most recently, as he marked his 100 days in office, he visited the US, where he also spoke to the UN general assembly.

“I think his performance was absolutely standard, and given the fact that Slovakia’s position is not totally clear for some of its foreign partners, he played his role very well, because he diffused these doubts,” Mesežnikov said.

Back at home, and especially during the election campaign, the state of Slovakia’s judiciary was perhaps the main issue Kiska discussed, stressing the need for big changes.

Almost immediately after his inauguration, Kiska took a series of steps to show that the judiciary was indeed going to be among his priorities.

He first rejected the three presidential nominees in the Judicial Council and replaced them with new people.

Kiska then got into a dispute with parliament after he refused to appoint three new Constitutional Court judges from among the six candidates that parliament elected. Kiska only appointed one new judge, and asked parliament to elect four new candidates for the remaining two vacant posts. He argued that among the five rejected candidates, he found no “long-standing interest in constitutional law and constitutional judiciary”, nor “sufficient specialised qualifications”. Parliament Speaker Pavol Paška has, however, not been inclined toward such a solution, and it remains unclear when or if an election of new candidates will take place.

Moreover, the one law that Kiska has vetoed so far is related to the judiciary. In an amendment to the law on judges, the ruling Smer party, assisted by the Christian Democratic Movement (KDH), passed a set of judiciary changes, including security clearance screenings for judges, which have been widely criticised by the opposition as well as by the judges themselves. Kiska returned the law to parliament.

Aside from disputes over the judiciary, President Kiska’s relationship with the government and the MPs of the ruling party have seemed relatively smooth.

Despite the heated campaign ahead of the second round of the presidential election in which he ran against Fico, the official candidate of the ruling Smer party, the first 100 days in office have not seen any open conflict between the two men, nor between Kiska and the government.

“The concerns that the president would attempt to be a sort of alternative and confrontational partner for the government have not been proved right so far,” Mesežnikov, who also voiced these concerns after Kiska’s election for president, told The Slovak Spectator.

During his campaign, Kiska’s competitors would repeatedly accuse him of being inexperienced, as he had no political background whatsoever.

While some saw this as a flaw, Kiska continued to stress his lack of political affiliation as a positive trait, saying he was ready to become the president of all citizens.

Mesežnikov admitted that Kiska has not done anything in the first 100 days that would disprove this ambition of his, but noted that there has not been enough time to allow him to put all his ideas into practice.