AUDITING is facing several challenges in the form of new rules from the European Commission, as well as drastic price competition and difficulties attracting talent. The Slovak Spectator spoke about these issues and more with Dalimil Draganovský, partner and head of assurance of EY in Slovakia; Ján Bobocký, director of audit at Deloitte in Slovakia; and Bart Waterloos, partner of VGD - AVOS Bratislava. 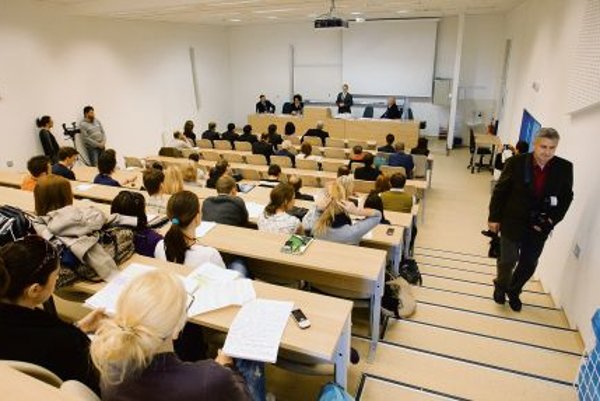 AUDITING is facing several challenges in the form of new rules from the European Commission, as well as drastic price competition and difficulties attracting talent. The Slovak Spectator spoke about these issues and more with Dalimil Draganovský, partner and head of assurance of EY in Slovakia; Ján Bobocký, director of audit at Deloitte in Slovakia; and Bart Waterloos, partner of VGD - AVOS Bratislava.

The Slovak Spectator (TSS): What are the biggest challenges players in the auditing market face?
Dalimil Draganovský (DD): The biggest challenges have remained the same for the last couple of years. On one hand, there is an increased volume of new and stricter requirements on auditors, resulting in an increased number of hours spent on audit engagements and training. On the other hand, there is continuous pressure on the market to decrease fees for audit services. It is obviously extremely challenging to balance these conflicting trends.

Ján Bobocký (JB): These are drastic price competition, with price as the only criteria in tenders, and adaptation to structural changes in the profession, which may be overshadowed by current EU regulation changes, but will definitely change the future of auditing compared to current practice.

Bart Waterloos (BW): There is an ever increasing importance in performing the audit in a technically perfect way (detailed risk analysis, data analysis tools, electronic files and archiving, etc.). International Standards on Auditing are making it almost impossible for sole-practitioners or very small audit companies to comply with all these requirements, unless they continue with just reviewing the purchase invoices. Audit companies need a certain scale and international links to obtain all the resources required for this.
On a global scale we see that in several other countries where we are active, it is getting more and more difficult to attract bright, young students to the audit profession.

TSS: How do you perceive the new rules the European Commission has introduced in auditing (new regulation on specific requirements regarding statutory audit of public-interest entities and the amendment of the EC Directive on statutory audits of annual accounts and consolidated accounts)? What impacts will the new rules have on the performance of the audit profession in Slovakia?
DD: EY will work to support successful implementation of the new rules and to help serve the needs of companies and investors, strengthen the capital markets and enhance confidence in financial reporting. However, we continue to question the legislation’s economic costs and its impact on audit quality and shareholder choice, especially in light of existing requirements. The new rules represent a major change introduced in Slovak and European auditing legislation in recent years, with significant impact on the audit profession in Slovakia and the whole of Europe, in particular on the auditors of public interest entities. Mandatory audit firm rotation and non-audit service restrictions may increase auditors’ independence and contribute to a more dynamic audit market, but they also bring additional administrative work and decrease possibilities for using auditors’ knowledge.

JB: New rules make up a separate playground for audit firms serving public interest entities. The most significant change in this is not mandatory rotation, but increased requirements on the form of the auditor’s report, which ceases to be a boring obituary. Auditors will have to report on the key audit risks and the procedures and findings on these key audit risk areas. This again comes not from the EU, but from proposed changes in International Standards on Auditing.
The rotation rules and caps for non-audit services could lead to a change of auditors in a significant volume of EU listed companies.

The long transitional period is more to accommodate all these changes for both audit firms and corporations without impact on quality – audit companies should focus on doing audits and not preparing for 40 big, multinational tenders or more in one year.

BW: First of all, it will take a while before there will be a real impact of the new rules, given the long transition period. But we believe that these new rules will open more opportunities for cooperation between the big four audit companies and the top runners of the second tier audit firms. The possibility for joint-audits could especially be a win-win situation that we would be willing to look at.

TSS: The Slovak Chamber of Auditors (SKAU) points out that within the new rules the EC also introduced a ‘black list’ of non-audit services that auditors would be not able to provide any more. What impact do you expect these restrictions on non-audit services to have on auditing companies and their clients in Slovakia?
DD: We believe both companies and auditors can benefit from non-audit services. Companies can benefit from the knowledge an auditor has already obtained during the performance of an audit and insights an auditor has on specific industries and topics. Auditors can enhance understanding and knowledge of their audit clients, which can contribute to an increased quality of audit services. At the same time, we support prohibiting auditors from providing non-audit services that could be seen to compromise an auditor’s independence. Where such non-audit service prohibitions exist, we believe they should be consistent around the world and aligned with the International Ethics Standards Board for Accountants Code of Ethics.

JB: Such lists have already been in national legislations of several EU member states. As such, most audit networks serving multinational companies have already introduced and implemented similar lists internally to ensure their compliance on group audits. It must be said that all these lists are based on rules of International Standards on Auditing, which have been in place for years in this respect. In our environment, a major change could be the restriction of tax compliance engagement, which used to be allowed. All in all, the impact could be limited for Slovak clients. On the other hand, introduction of blacklists by each EU country would make it even more difficult for audit firms to monitor all the different rules for every group audit and every country.

BW: We think that in certain cases the audit companies might be faced with choosing between continuing to serve the client as an auditor or to opt for other services. Clients will have to solve more conflicts of interests and use a more varied scale of professional advisor firms. From our Belgian colleagues we understood that stricter rules on non-audit services, which they have already had for several years, opened up the audit market.