Convergences was a hit again

THE 15TH year of the Konvergencie (Convergences) music festival once again offered a wide range of events, including an exhibition, a concert for children, less traditional performances involving the Japanese koto and a 1980s Slovak punk rock group and, of course, the creme de la creme of chamber music. The shows took place across several venues in Bratislava between September 11-24. 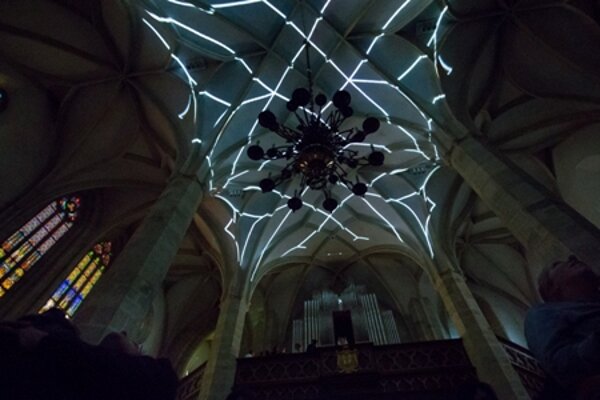 THE 15TH year of the Konvergencie (Convergences) music festival once again offered a wide range of events, including an exhibition, a concert for children, less traditional performances involving the Japanese koto and a 1980s Slovak punk rock group and, of course, the creme de la creme of chamber music. The shows took place across several venues in Bratislava between September 11-24.

Not for closed eyes

People who listen to music with their eyes closed had to keep them open to fully enjoy the festival’s sold-out opening concert, an exceptional programme combining the minimalist music of American composer Philip Glass played by Fero Király on organ, and lighting design by Slovak designer Ján Šicko, projected onto the Gothic vault of St Martin’s Cathedral.

The two Glass compositions, Mad Rush and Two Pages for Steve Reich, framed the performance of material by Slovak alternative music composer Martin Burlas. Burlas composed Three Unfinished Pieces for Cello for the Convergences festival and premiered them on September 15. The music had the audience in awe, and they applauded for nearly a minute after the first composition ended, proving the success of Király and Šicko’s show.

The performance of Glass’ works and the lighting design was a continuation of the project for the Philip Glass organ concert Contrary Motion, which was held at Slovak Radio as part of the Radio Head Awards earlier this year.

“I like projects where I don’t know how they’re going to turn out,” said Ján Šicko, as cited in the festival bulletin, adding that the challenging and unpredictable nature of these projects helps him reach the outer limits of his abilities. “The lighting design for the Burlas-Glass concert is one such project.”

His goal was to produce an application that would create an image in real time based on the music and his interpretation of it during the concert. The image was then projected onto the cross vaulting of St Martin’s Cathedral.

The music had the audience in awe, and they applauded for nearly a minute after the first composition ended, proving the success of Király and Šicko’s show.

Although Konvergencie in the meantime expanded into various musical genres and styles, some of which are fairly exotic, the roots remain the same, and at least one evening is devoted to chamber music every year: the Bratislava Night of Chamber Music.

The evening of September 19 was comprised of three concerts. The intimate atmosphere of the first one was augmented by glasses of wine offered to visitors to accompany the mainly Classicist pieces by Juraj Družecký and Mozart performed on replicas of rare, historical basset horns found at the Slovak castle Krásna Hôrka. The original instruments were made in the 18th century by Theodor Lotz from Bratislava and Vienna.

Lotz knew Mozart well, and as well as his contemporaries, like Družecký, Anton Stadler, Vojtech Nudera, Johann Josef Rösler and others who wrote pieces for basset horns. The Lotz Trio, named after him and consisting of Róbert and Ronald Šebestas and Sylvester Perschler, also played a piece by contemporary composer Marek Piaček.

The second concert was perhaps the best attended event, with the UK’s Raphael Wallfish (cello) and Israel’s Hagai Shaham (violin) and Arnon Erez (piano) performing works by Haydn, Anton Arenskij and Maurice Ravel. The audience, wowed by the pieces the musicians performed and their musical mastery, demanded multiple encores.

“The music we are now going to play for you will enable the music of previous concerts to gradually die away, as our music is very quiet, slow – and even slower – until the very last piece, the beautifully clear Schubert’s Piano Trio,” the organiser of the festival, Jozef Lupták, said about the third concert, in which he performed with violinist Milan Paľa and pianist Nora Skuta the works of Arvo Pärt, Martin Burlas and Schubert.

If the tranquil performance put anyone to sleep, the guest performance by accordionist Boris Lenko undoubtedly awakened them, as “he could bring even the devil out of a coma”, one visitor suggested.

In keeping with previous years where acts like Collegium Musicum or Hommage a Dežo Ursiny reunited to play at Convergences, this year the festival saw 1980s band Ventil RG get back together.

The totalitarian regime never allowed them to record an album (they only did so in 1991, after they split up) and their songs were never played on the radio, yet they were nevertheless quite popular and their concerts were spirited events. They called their music punk rock, even though their music was not angry, but rather amusing with ironic lyrics. Some of their songs are still played by the band Vidiek, which was started by some of Ventil RG’s original members.

They opened their set with ‘Tatry 2000’, a song predicting a future of pollution for the High Tatras (which fortunately did not happen), and continued with other songs whose lyrics reflected life under the previous regime. The concert reached its climax with classic numbers like ‘Radšej budem dnes...’, in which they sang that they would prefer to be active today rather than radioactive tomorrow, as well as Fajčenie škodí zdraviu (‘Smoking Harms Your Health’).

Fans in the audience included those who were old enough to remember Ventil RG in their early years, as well as younger people born after the fall of the communist regime. They played with the same energy as 30 years ago, and apologised for the relative brevity of their hour-long set, explaining that they performed everything from their repertoire that they were able to rehearse. They made up for it by playing some of Vidiek’s songs as well.

When summing up Konvergencie’s 15 years and musing on its future, Lupták said that he still considers the core of the music played at the festival to be chamber music. “We [musicians] play without a conductor, and although at some foreign chamber festivals there are 500+ visitors, the ‘chamber’ quality is still preserved. As there is an intimate atmosphere created and the concert involves the ear and the spirit of the audiences in what is happening amongst the musicians, from this point of view, it is always a great risk to organise bigger concerts, but so far it has worked well for us,” he concluded.