THOUGH you might have missed the fourth edition of the Jurčove dni (Jurčo’s Days) event in Nitrianske Pravno, western Slovakia, back in mid August, the results of this festival, where both local and international blacksmiths converge each year to demonstrate their skills, will have a lasting effect. 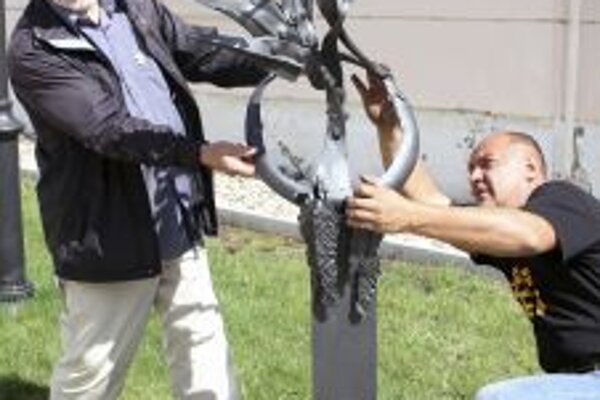 THOUGH you might have missed the fourth edition of the Jurčove dni (Jurčo’s Days) event in Nitrianske Pravno, western Slovakia, back in mid August, the results of this festival, where both local and international blacksmiths converge each year to demonstrate their skills, will have a lasting effect.

Forty five blacksmiths participated, creating their works before the visitors’ eyes, like hand-hammered sculptures, statuettes and plastic art, all of which went into an exhibition.

Benedikt Jurčo, the festival’s namesake, is currently the headmaster at the Private School of Applied Arts in Kremnica, originally established as the Secondary School of Arts and Crafts in 1966. In his 48 years of teaching, 350 young people have graduated from this course.

“I am glad that most of them have not diverted from these difficult, complex crafts,” Jurčo told the TASR newswire. “This can be proved by the fact that 56 smiths still exist around Slovakia, which have their logo and a respected brand. Many repair and restore metal gates, bars and other parts of historical buildings where similar technologies, as in the past, have to be applied.”

Jurčo, who is retiring to be replaced by his former student Juraj Cinkanič, added that Slovak blacksmiths have also been successful abroad, for example, in Germany, France and the US. Peter Štafen has a shop in France and has participated in renovations at Versailles. His brother Pavol focuses on precious metals and stones in Slovakia. Another graudate, Ján Konuš, went on to study at the Academy of Arts in Banská Bystrica and became a prominent sculptor.

A group of French blacksmiths were invited by Peter Štafen to help forge a memorial sculpture to commemorate such meetings. Branislav Morávek, Tomáš Šiagy and Ján Konuš forged a comical statue of a photographer with an old leather camera bag covered with a linen sheet. Afterwards, the statue was coated with zinc and placed in the park in the middle of Nitrianske Pravno. The blacksmiths agreed to donate the works of art made at the event to the municipality with the aim of gradually creating a unique gallery for this craft in Slovakia

The first statue, called Re-birth, was made by Titus Angyla with his helpers in the Dedina mládeže village near Komárno. He strives to emphasise the efforts of artisanal blacksmiths to preserve what he describes not as a craft, but a mission.