Kiska returns from lengthy US trip

PRESIDENT Andrej Kiska concluded a lengthy trip to the United States on October 2, a trip that included the 69th session of the UN General Assembly in New York, and later a trip to California’s Silicon Valley. 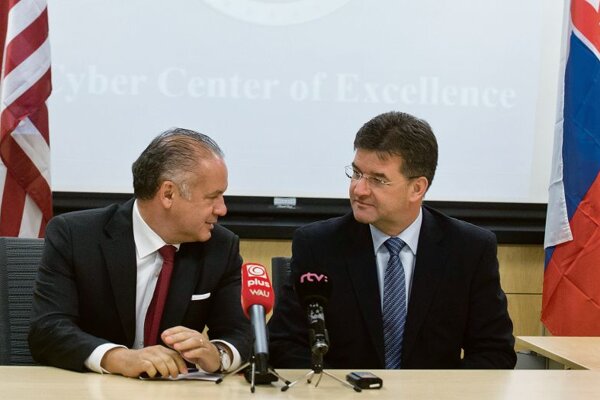 PRESIDENT Andrej Kiska concluded a lengthy trip to the United States on October 2, a trip that included the 69th session of the UN General Assembly in New York, and later a trip to California’s Silicon Valley.

Kiska addressed the UN session and met with UN Secretary General Ban Ki-Moon on September 23. In his speech to the UN General Assembly, Kiska said that the UN must be an authority that is able to define and solve conflicts and problems, as well as prevent them.

“Together we should convince people around the world that we protect the international norms and principles the UN is building upon,” Kiska said in his speech.

The president also stressed that he refuses the violation of territorial integrity of any state, suggesting that the annexation of Crimea must not be an exception from this principle. He called on the international community to respect the territorial integrity and the sovereign right of the Ukrainian people to decide their fate in a free and independent manner. He said that the UN plays a crucial role in this matter, and that Slovakia is ready to participate in the process of restoring peace and stability and implementing reforms in Ukraine.

Kiska also mentioned the unexpected rise of the Islamic State organisation and the mission of the allies in Afghanistan in his speech. During his visit to the UN Kiska also met US President Barack Obama.

Ukraine was mentioned repeatedly during Kiska’s visit to the United States. Foreign Minister Miroslav Lajčák, who accompanied Kiska, spoke about Ukraine in his address to the panel discussion with professors and students of Stanford University towards the end of the visit, on October 1.

In his speech, Lajčák claimed that the key source of present problems is the differing interpretations of the nature of the EU Eastern Partnership project.

“The Eastern Partnership has never been meant as a tool of confrontation, even though the current situation demonstrates otherwise. And so, instead of a win-win scenario, in which both sides could be happy, we face a scenario where all of us lose,” said Lajčák, as quoted by the TASR newswire.

As for the current situation in Ukraine, the minister finds it important to be more “pro-Ukraine”, instead of “anti-Russian”.

“We also need to find ways to help Ukraine develop, and fast, because time is of the essence,” Lajčák said. “If we do not help facilitate fundamental changes in Ukrainian society and do not do so soon, it might prove to be too late. Ukraine needs a successful transformation and a comprehensive plan vis-a-vis our aid, with responsibilities clearly defined over who will help in which specific sphere with either investments, energy supply, advice or sharing our experience.”

To conclude the visit, Kiska and Lajčák visited the Commonwealth Club, where Kiska delivered a speech on Slovakia and its European integration.

Kiska also participated at the Central-European Forum for Digital Economy in New York, where he said that the Visegrad Group countries should work on the support of innovations together, and join forces to gain some visibility for the region in the United States. The countries could even get their representation office in the Silicon Valley, a so-called Visegrad House, that would help the central-European start-ups make their way into big business, Kiska said.

At Stanford University, Kiska spoke about education and stated that the Slovak education system needs reforms. Kiska familiarised himself with the latest trends in teaching and linking education with practice, TASR reported.

“At Stanford, we discussed e-learning and its potential use by our students who want to be really good in their fields of study,” said Kiska, adding that it is sad to hear that thousands of new jobs could be created in Slovakia if its schools were capable of providing education to young people in a way that was really suitable for IT firms, for example.

Kiska met representatives of the US company GlobalLogic, which is planning to expand its presence in Slovakia within three to four years. It may boost the number of employees at its branch in Košice from 60 to as many as around 500.

“We are not talking about any old factory... we are talking about analysts, architects and people who will design the most up-to-date products for large US firms,” said GlobalLogic expansion manager for Central and Eastern Europe Ivan Hruška, as quoted by TASR.

GlobalLogic CEO Shashank Samant added that this is actually the second time that the company is investing in Slovakia. He went on to say that Slovakia is first and foremost a good source of talented engineers. Secondly, it is located in central Europe and is a member of the European Union, which makes things easier for doing business.

Kiska concluded his US trip with a visit to Facebook headquarters in Menlo Park, near San Francisco, where he held a live online chat with his Facebook followers.