WHILE health spending in Slovakia lags behind the OECD average, the biggest problem in the country’s health care is not a lack of money – but lack of efficiency. 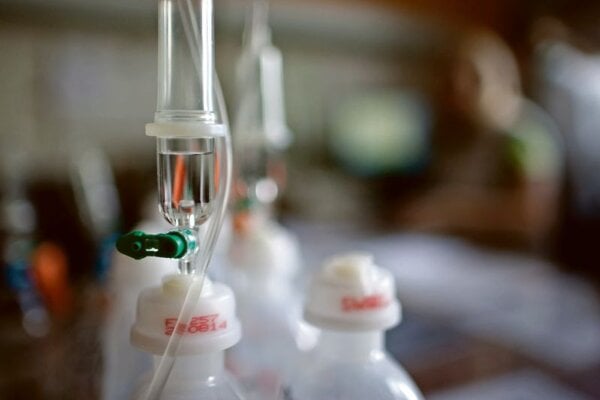 WHILE health spending in Slovakia lags behind the OECD average, the biggest problem in the country’s health care is not a lack of money – but lack of efficiency.

“Ballooning health spending as a share of the country’s GDP is not a guarantee for higher quality health care,” Health Ministry spokeswoman Martina Šoltésová told The Slovak Spectator, pointing to countries like Israel, which, while being on the top in health care spends only 7.3 percent of GDP on the sector.

Total health spending accounted for 8.1 percent of GDP in Slovakia in 2012, according to the OECD, below the OECD average of 9.3 percent. The United States was, by far, the country that spent the most on health as a share of its economy (16.9 percent) followed by several European countries including the Netherlands (11.8 percent), France (11.6 percent) and Switzerland (11.4 percent).

Dušan Zachar from the social-economic think-tank INEKO pointed out that while Slovakia’s spending measured as a share of GDP does not achieve the OECD average, it is higher than that of the remaining Visegrad Group countries. Hungary’s spending was 8 percent, followed by the Czech Republic with 7.5 percent and Poland with 6.8 percent.

Zachar also added that health spending in Slovakia grew in real terms by 10.9 percent on average between the years 2000 and 2009, which meant the highest growth out of all OECD countries.

“Based on several expert studies Slovakia has significant room for improvement in the effectiveness of the health-care system and thus it is possible to say that Slovak citizens should have paid much less for the current level of provided health care and health or said it from the other side, for money Slovakia currently spends on health care, its citizens should get much more – better health care and more health. The problem of Slovakia’s health care is wasting of funds.”

Tomáš Szalay, senior analyst with the Health Policy Institute (HPI), a think tank focused on health policy and health economics in central and eastern European countries, warns in respect to OECD data that because of differences in quality and methodology between individual countries as well as individual years, it is sometimes difficult to compare properly.

According to Szalay, the only reliable data is the volume of public resources, especially sources of public health insurance.

“Since 2000 these sources grew, from 4.9 to 5.7 percent of GDP. We even had a year with 6 percent – 2009,” said Szalay, adding that in respect to this indicator Slovakia lags behind western Europe and the Czech Republic while the country outpaces Poland or Hungary. “Whether it is a lot or a little – this depends on the effectiveness of the usage of resources. If we had more money in the health-care sector, we could shorten waiting lists for surgeries or order more over-priced CT examinations.”

Szalay does not support the idea of increasing health-care budgets via increasing taxes and contributions paid by citizens.

“If sources in health care were not used effectively enough today, it is not fair to burden citizens with additional taxes or contributions until holes via which public sources leak from the system are patched out,” said Szalay.

The OECD data also pointed out that the share of private funds on health expenditure in Slovakia, 22.4 percent, is higher than the OECD average of 19 percent.

Zachar agrees that over the last decade out-of-pocket payments measured as a percentage share of health-care expenditure increased from the level below the OECD average to far above this level. According to him, the massive increase in direct payments cannot be ascribed to direct payments introduced by the then health minister Rudolf Zajac during health-care reform years of 2003 and 2004 (payments amounting to 20 and 50 Slovak crowns when visiting surgeries or emergencies) as almost all of them were scrapped in 2006, but to the high level of direct payments of citizens has remained. The reason is an uncontrollable increase of various semi-official fees collected by doctors, which are hardly regulated.

“There is missing a clear definition to what a patient during medical treatment is entitled to [free of charge] based on the public health insurance,” said Zachar.

The Health Ministry is aware of the difference in private expenditures and according to Šoltésová it is taking measures to reduce their volume of private expenditures, for example via the regulation of fees doctors in outpatient’ departments can ask.

“One should also realise that a system of private [supplemental] insurance exists in many countries while these sources do not occur in statistics of private expenditures even though they can fully compensate for additional costs of health care above the scope of standard services,” said Šoltésová.

On the other hand, Szalay takes OECD’s data related to private health expenditures as exaggerated, by two- to three-times. Because of this, as well as because of the changed methodology, HPI considers these numbers to be incomparable.

In many OECD members, including Slovakia, spending on pharmaceuticals decreased in recent years. Pharmaceutical spending in Slovakia was flat in 2010 and then fell by 3 percent to 4 percent in real terms in 2011 and 2012. OECD attributes this reduction at least partly to the introduction of a reference-based drug pricing system in 2009 and 2010.

Still, based on OECD statistics, Slovakia spends more on pharmaceuticals than the OECD when in 2012 it was USD535 while the OECD average was USD498.

“Simultaneously it is necessary to add that in many statistics also finances spent on over-the-counter goods in pharmacies are also included, which may distort compared data,” said Šoltésová.

Zachar of INEKO sees big spending on pharmaceuticals as a indicator of overall bad health in the country as well as a culture that encourages doctor visits with patients seeking medicine.

“The extent of referring patients by general practitioners for further treatment to specialists is, according to the WHO, extremely high – it reaches approximately 245 references per 1,000 patients’ visits per year,” said Zachar. “As much as two-thirds of patient visits at the doctors lead to the prescription of medicine.”

But he stressed that the usage of the international referencing of medicine prices has helped to curb public spending on pharmaceuticals significantly.

“Referencing medicine prices in Slovakia can be considered to be a success story of the Slovak health policy of recent years,” said Zachar.