THE POSSIBILITY to get a second opinion on a health condition online is drawing an increased number of Slovaks. In 2014, two websites providing online diagnoses emerged in Slovakia: Diagnose.me offering services of recognised professionals living all around world and Klik-Klinik which uses domestic doctors. 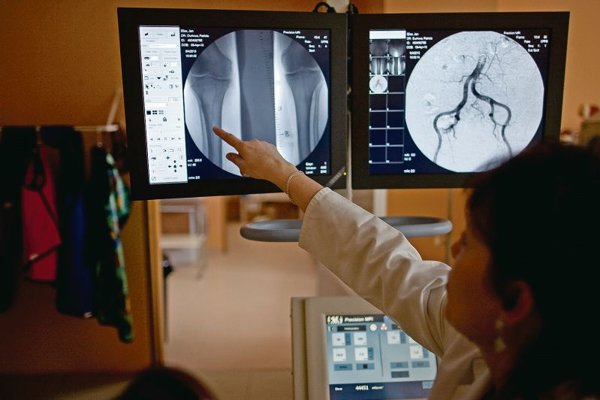 Patients have possibility to get second opinion on some of their scans online. (Source: Sme)
Font size:A-|A+

THE POSSIBILITY to get a second opinion on a health condition online is drawing an increased number of Slovaks. In 2014, two websites providing online diagnoses emerged in Slovakia: Diagnose.me offering services of recognised professionals living all around world and Klik-Klinik which uses domestic doctors.

Diagnose.me has been running for seven months and nearly 100 doctors from around 25 countries are participating in the project, along with more than 1,000 registered users from some 20 countries, according to Diagnose.me CEO Lukáš Alner. The prices start at €50, according to the website.

In early March 2014, another website providing diagnoses for €10 and up called Klik-Klinik appeared. Since then, 161 doctors with 71 specialisations have offered their services to hundreds of patients via this website, according to Andrej Blanárik, the CEO and owner of Zdravie.sk webpage which runs Klik-Klinik.

While the popularity of online diagnoses among patients increases, it also means less direct contact with doctor, according to Klik-Klinik registered physician Jana Bendová of the Slovak Society of General/Family Practice SLS (SSVPL SLS), which unites general practitioners. She welcomes such services, however.

“Such a service was missing in Slovakia,” Bendová told The Slovak Spectator. “An increasing number of people look for information about health and diseases on the internet and I think that there is a target group [of people] which welcomes the possibility of anonymous consultation.”

Still there is a risk that people will be manipulated, and patients should know who offers such services. Charlatans especially target people seeking diet supplements, according to Association for the Protection of Patients’ Rights in Slovakia (AOPP) President Petr Kučera. Legislation should be more specific about such services, he added.

“The state should be more consistent,” Kučera told The Slovak Spectator, “because the patient’s lack of education is misused by those quasi-services relatively often.”

Diagnose.me is a joint project of Alner and one of his partners from previous businesses, Ivan Štefunko. They realised that it is very difficult for Slovak patients to get another opinion about their medical condition from foreign experts, or even a second Slovak specialist. Both considered the geographic distance between radiologists and patients as unimportant since currently even hospitals send diagnostic images to radiologists who do not personally see patients, Alner said in interview with Slovak version of Forbes in early August.

Moreover, Diagnose.me clients can see profiles of participating doctors and responses on their work while such evaluations by doctors are not even normally available at hospitals.

“It is unbelievable, but you can find in advance more information about a hotel which you are going to visit,” Alner said, as quoted by Forbes, “than about hospital or doctors in whose hands you put your trust.”

The Klik-Klinik has been developing as a service of Zdravie.sk webpage, which has been publishing articles about health care since 2012. People approach domestic professionals with almost all kinds of problems, but sensitive cases related to urology, plastic surgery, gynaecology or psychology are most common, according to Blanárik.

“Customers and professional groups start to recognise and accept our service since we are successful in creating systems which guarantee an environment where both sides – user and professional – feel comfortable and secure,” Blanárik told The Slovak Spectator.

“Our platform does not substitute the standard way of health care providing, but rather increases its effectiveness and accessibility,” Blanárik said.

It was not difficult to persuade doctors to participate because they themselves expected that the connection between health care and the internet would grow. The founders, however, had to first assure professionals that they had already solved all legal, security and financial issues. More than 30 professionals of various fields participated in the project founding, Blanárik said.

In the case of Diagnose.me, firstly, Alner persuaded Belgian radiologist Erik Ranschaert, a member of the European Society of Radiology to participate in the project. Then Ranschaert approached other specialists all around the world, Alner said. The website, however, accepted only doctors who have more than three years of practice in their subspecialisation, are cited in scientific works, have membership in scientific societies and have received awards from scientific boards, according to the Diagnose.me website.

Since prices start at €50 per diagnosis and professionals who are on Diagnose.me webpage earn hundreds of thousands dollars per year on their own, there is also philanthropy behind their decision to participate, Alner told Forbes.

“Other doctors praise the chance to consult specific cases which normally they would not have the chance to deal with and thus grow professionally,” Alner told The Slovak Spectator. “Through Diagnose.me they can build their online reputation thanks to feedback from patients and therefore be more visible.”

Patients seek out such services when they want to be sure about the opinion of their doctor. Sometimes their intuition tells them to approach another specialist or they feel that they were not examined properly. Also, people who do not have time for a personal visit or who are too shy to talk about their problems can benefit, Bendová said.

“If I were a patient I would use this possibility either when dealing with some delicate problem,” Bendová said, “or when I would want to hear the opinion of a second specialist on the same problem.”

The rise of diagnosis and advisory web pages is a worldwide trend; patients want to know the opinion of more than one doctor about their health care, Health Ministry spokeswoman Martina Šoltésová told The Slovak Spectator.

“… This however does not assure the correctness of such diagnosis without personal contact,” Šoltésová said. “After all, it’s their doctor who bears responsibility for prescribing treatment.”
Ladislav Pásztor, the president of the Private Physicians’ Association of Slovakia criticises online diagnosis claiming that it lacks a personal approach. He connected the popularity of those services with decreasing the mutual trust between patients and doctors in standard medicine. On the other hand, it is possible to assess some documentation such as computed tomography (CT) scans online, he told the Sme daily.

People seeking advice with their health problems on the internet also often find sources promoting alternative medicine and pseudoscientific claims about cures or diets. Their rising popularity among Slovaks prompted Maroš Rudnay and his friends from the Medical School to create a Facebook account “Lovci šarlatánov” (Sham Hunters) in 2013.

The aim of Sham Hunters is to analyse and refute baseless claims and hoaxes in the field of medicine which have been spreading online. Later they created webpage with the same name, focused on debunking medical myths and misconceptions.

“It should be openly said that the project which I and my colleagues created went much further than was originally planned,” Rudnay told The Slovak Spectator. “Responses are positive and many people have showed us support and appreciation.”

Believing in some forms of alternative medicine could be dangerous, according to Rudnay who pointed to a case which he experienced, when a patient ended up in the intensive care unit after using a product called Miracle Mineral Supplement, a toxic solution of 28 percent sodium chloride in distilled water.

“It is the personal decision of each person whether they will entrust themselves to the hands of professional or a healer,” Šoltésová said, “and therefore they suffer the consequences of their decision.”

There are even cases when doctors spread myths about health care, for example about vaccination or private physicians who offer homeopathy, bioresonance or other forms of alternative pseudoscientific medicine, according to Rudnay.

Citizens who look for such healers often lack proper education and are looking for problems even when they do not exist. Therefore the education about biochemical processes running within the human body, as well as increasing trust in conventional medicine is part of the solution, according to Šoltésová.

Šoltésová admitted that unqualified health care providers should be regulated more strictly, especially when they cross borders of additional services for improving quality of life and pretend they can heal serious illnesses.

“The lax approach of the state towards healing is expressed by the fact that there is no legislation, with the exception of the Criminal Act, which deals with [alternative] healing,” Slovak Medical Chamber (SLK) secretariat head Daniela Resutíková told The Slovak Spectator.