INTERNATIONAL theatre festival Divadelná Nitra presents annually a selection of the most recent plays and projects that have made it to Slovak and foreign stages, with a different motto, or leitmotif, each year. This year, the official slogan was Art – What For? which was also the focus of a public debate that took place during the festival and that is slated to continue even after the festival ends. 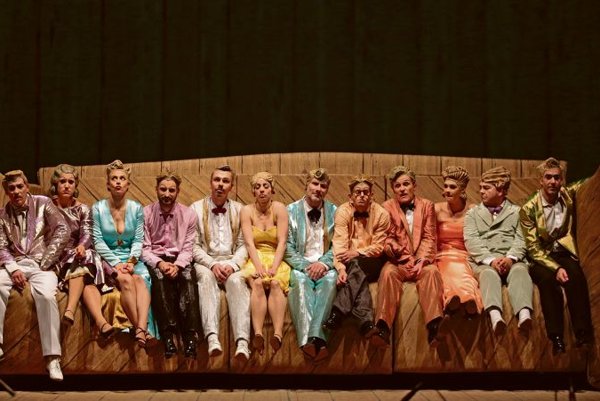 INTERNATIONAL theatre festival Divadelná Nitra presents annually a selection of the most recent plays and projects that have made it to Slovak and foreign stages, with a different motto, or leitmotif, each year. This year, the official slogan was Art – What For? which was also the focus of a public debate that took place during the festival and that is slated to continue even after the festival ends.

However, the 23rd year of Divadelná Nitra that took place between September 26 and October 1 in the city of the same name seems to have had yet another common point: history, past events, revolutionary twists and turns – be it those of a group, a nation or a whole continent; be it ancient or quite recent past.

The organisers reported that a total of 8,000 visitors participated in the festival, with about 3,300 audience members having seen the main programme: five performances from Belgium, the Czech Republic, Hungary, Germany, and Slovenia, and five pieces from different Slovak theatres.

the Nitra gallery had two exhibitions revolving around theatre and stage design, including the White Night / Nuit Blanche evening full of events on September 27. There were workshops, events for children, concerts, the Art in City(light) project, A Tulip for You project, for involving challenged children in art; film screenings as well as the Festival Plus project which offered a host of side-performances. For the first time in history, the festival also ventured outside of Nitra, making a guest performance of Informátori / Whistleblowers of the Farm in the Cave / Farma v jeskyni theatre from the Czech Republic in the Stanica Žilina-Záriečie culture hub in the city of Žilina on September 30.

More than a half of the Slovak dramas deal with history, in a specific period (or a whole century) and the way an individual handles demanding situations and life challenges. The Svedectvo krvi /Evidence of Blood performance of the State Theatre in Košice, directed by Polish Agnieszka Olsten (with original music written by Polish composers, Wojciech Orsziewski and Katarzyna Borek) takes one short event from the turbulent times of anti-Habsburg revolts, when the rebelling commander Gabriel Bethlen during his siege of Košice imprisoned, tortured and executed three Catholic missionaries, two of whom were foreigners. The piece explores the motivation, emotions and sometimes paradoxical relations between the martyrs and their tyrant, the martyrs and the local nobility, and the martyrs and their loved ones. The music and stage design (by Tom Ciller) of the Evidence of Blood got the Dosky / Boards 2014 award that annually selects the best theatre achievements in several categories.

The Europeana – A Brief History of the 20th Century piece of the Slovak Chamber Theatre in Martin, directed by Ján Luterán, strives to offer a funny, ironic, as well as personal aspect of the otherwise gloomy history of the 20th century, interspersed with general information and historical facts.

Láskavé bohyne / The Kindly Ones is an adaptation of a piece written by John Littel, adapted for the Slovak National Theatre in Bratislava and directed by Michal Vajdička (which received the Boards for the Best Staging, the Best Director and the Best Actor). It follows the inner world and intimate reactions of a fictitious character in the 1930s, during the era of economic crisis and the gradual rise of Fascism in Germany. The Capital, a play of the Aréna Theatre in Bratislava, directed by Martin Čičvák, uses the work of Karl Marx, but it focuses rather on the latest stage of the “capitalist regime” and especially the state of civilisation.

The last Slovak drama, Potkany / Rats of the local Andrej Bagar Theatre, directed by Roman Polák, rather exposes the private catharsis of a socially marginalised single mother and a wealthy childless woman.

From among foreign plays, the Czech one – Zlaté šesťdesiate alebo Denník Pavla J. / The Golden Sixties or Pavel J. Diary of the Na Zábradlí theatre from Prague directed by Jan Mikulášek – focuses on the notices of real Czech scriptwriter and dissident Pavel Juráček. And the Kaisers TV, Ungarn of the Béla Pinter and Company from Budapest explored the national history in a funny and unexpected way: through a fictitious travel through time which, although meant to change the fate of one family, in the end may have changed and re-written the whole of Hungarian (and also Slovak, for that matter!) history.

There were also foreign theatres, however, which skipped the serious issues and historical research, and came with rather individualistic themes and theatrical tools: the opening piece Untitled No 1 – Opera by Herbert Fritsch was pure fun, offering a host of sketches, etudes and fun on the background of spectacular, though slightly unusual music. German actor-turned-director Fritsch is renowned for his provocative attitude towards theatre, and also for giving actors a bigger than ordinary space in the final performance. The lively piece of the Voklsbuehne am Rosa-Luxemburg-Platz in Berlin, which had its international premiere in Nitra, was maybe a little too hippie for the city representatives and high society that gathered at the opening ceremony, but it certainly can find its audience among the regular theatre-goers, especially if they forget their expectations – and also the word “opera” in the title.

The Book Burning, a mono-drama by Belgian Pieter De Buysser, was outside the “classical” theatre, too, but the “story told by a cat” that combined a personal, moving story with the most general current chaos and information overload, had more luck in that it was staged in a smaller venue and attended by a more knowledgeable and better prepared audience.

The last foreign performance was the refreshed piece Falcon! By a Slovenian duo, choreographer Iztok Kovač and director and performer Janez Janša, confronting the original solo performance by Kovač from 1990s with the phenomenon of ageing, maturing, inevitable evolution and development.

In the accompanying events, Bulgakov’s The Master and Margarita directed by Ondrej Spišák and played by the Teatro Tatro group in a circus tent also made a trip into history: into the 1930s of the Soviet-controlled Russia; confronting the gloomy Soviet regime with the current political and social situation.

The question, Art – What For? – perhaps better specified as: Theatre – What for?, or Festival – What for? cannot have a single, simplified answer. Maybe it is a chance to leave the ordinary everyday worries behind and just enjoy a ride into the realm of fantasy and imagination, or to take a step from inside and take a look at the local current society from a wider view, “from outside” so to say. And for the English-speakers, the Divadelná Nitra festival with its subtitles also brings the opportunity to enjoy a fine selection of what is happening in the Slovak – and European – theatrical world.