CONTEMPORARY dance is somewhat outside the mainstream of public interest in Slovakia, probably not receiving as much popularity as some other art genres. All the more stunning are festivals which take place around Slovakia – and in the capital. This year, the Bratislava v pohybe / Bratislava in Movement festival will be entering its 18th year. 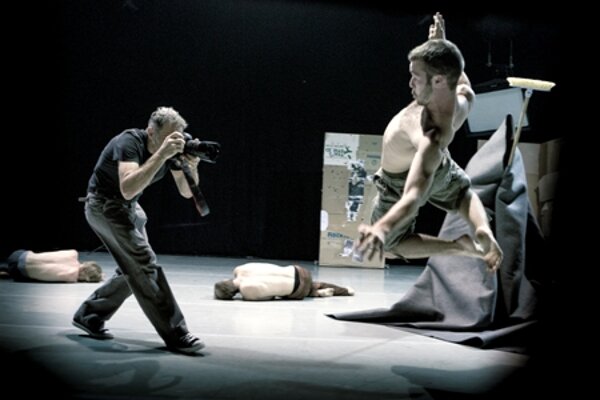 CONTEMPORARY dance is somewhat outside the mainstream of public interest in Slovakia, probably not receiving as much popularity as some other art genres. All the more stunning are festivals which take place around Slovakia – and in the capital. This year, the Bratislava v pohybe / Bratislava in Movement festival will be entering its 18th year.

Bratislava v pohybe usually offers an overview of what has happened in contemporary dance in Slovakia in the past year, while also bringing in foreign guests, introducing new ones each time. In 2014, there will be an exception, however. After last year’s huge success, the ensemble Ultima Vez of the provocative Belgian choreographer Wim Vandekeybus returns to present their “booty Looting”, a highly individualistic performance about “stealing what has been already stolen” which also tries to involve audiences. To satisfy the demand of all visitors, booty Looting will take place in the Slovak National Theatre (SND) on October 17.

The opening piece of the festival is a Slovak production: The Tempest, inspired by Shakespeare, which premiered last season in the SND. Staged on October 10, it will be followed the enxt day by by Skin Me, the Hungarian performance of dancers Viktória Dányi, Csaba Molnár and Zsófia Tamara Vadas with experimental musicians Áron Porteleki and Ádám Czitron, mapping and anatomising their relations, loves, and affairs. The next day, Israeli duo Niv Sheinfeld and Oren Laor show their minimalist perception of dance and theatre in Two Room Apartment, a piece exploring borders physical and mental, symbolic and actual.

After booty Looting, the Elledanse dance theatre school will play the Paved Life / Vydláždený život, rehearsed by another Israeli choreographer, Rotem Tashach, on October 18. The next foreign guest will be the Czech Spitfire Company on October 24 with Antiwords, an attempt to explore how a play by legendary Czech author (and dissident-turned-president) Václav Havel can be expressed solely by means of dance and physical theatre. Antiwords were conceived by Miřenka Čechová and Petr Boháč.

A day later, there will be a Nordic contribution: Jo Stromgren Compani from Norway follows the twists and turns of the fate of four ex-Soviet dissidents who got stuck between the West and the East, politically, mentally as well as geographically.

A big leap in geography, the Spanish HURyCan company brings Je Te Haime by choreographers / performers Candelaria Antelo and Arthur Bernard Bazin which won an award at the international festival in Huesca, Spain. This piece will close the whole festival.

The festival’s accompanying events include three performances in the Elledanse theatre, an analysis of her choreography by renowned author Pina Bausch, and a workshop with Niv Sheinfeld and Oren Laor for professionals and students. Full information on the programme and tickets can be found at www.abp.sk.

“Our offer for this year is rich and interesting, the choreographies are manifold in the selection of themes, dance styles and aesthetics, emotional and funny, commenting on our past and present times....” head of the festival Mirka Kovářová said. “We believe you will have enough to choose from, and also that you will come and spend some time with us, filled with the energy of dance, beauty of the motion of human body and the power of expression of their creators.”