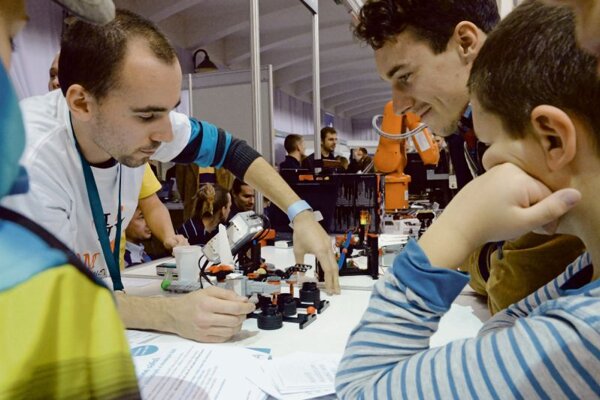 THOUGH the Education Ministry says the science funding is gradually increasing every year, Slovakia still lags behind the European Union average. Moreover, the Slovak Academy of Sciences (SAV), one of the biggest scientific institutions in the country, may see its budget for next year drop by 18 percent, as is indicated by the draft presented by the Finance Ministry in mid-August.

According to the budget draft, it should get €47 million, which is €10.3 million less than this year. SAV warns that this will force mass layoffs.

Ján Sedlák, chair of the SAV Congress, also pointed to another problem SAV employees face: salaries that are lower than the average salary in Slovakia and even significantly lower than those of other workers in the Bratislava region.

“Such a state worsens the intellectual safety of the country and will lead to a drain of experts who will not find career guarantees for their professional orientation in science and research in Slovakia,” Sedlák said, as quoted by the TASR newswire.

The negotiations over the final version of the budget are still underway and it is possible that the final funds for SAV will change.

According to Renáta Králiková from the Slovak Governance Institute (SGI), reducing the budget of SAV indicates a reduction in investment in science. These funds did not have to ultimately remain at SAV but, for example, could be diverted into the Slovak Research and Development Agency (APVV) where it would be possible to compete over the funds, she told the Slovak Spectator.

Leaders at Comenius University in Bratislava (UK), another important scientific institution, say that science and research lacks the support of not only the politicians, but also of various interest, economic and lobbyist groups.

“Research and development in our conditions is often approached as if its support, financing and co-financing is some kind of charity,” Karol Mičieta, rector of the UK, told The Slovak Spectator.

According to him, financing research and development should be a regular part of economic and business plans of the state. To achieve such perception it is necessary to raise the awareness and support of not only the academia, but also the public and media.

“It is necessary to realise at the level of the whole society that research is the only way to get to innovations without which there will be no new technologies,” Mičieta explained. It can also help implement already developed technologies, he added. “Science and research are also inevitable tools to prepare quality experts for our industry, business-making, and especially for competitiveness of our economy.”

The Education Ministry says that Slovakia’s problem is mostly the structure of financial resources. While the trend in European countries is that the private contributions on research are higher than the public sources, in Slovakia public sources prevail, ministry spokeswoman Beáta Dupaľová Ksenzsighová told The Slovak Spectator.

According to Králiková, a first priority for boosting science should be strengthening the grant system in Slovakia, meaning supporting more grants provided by the APVV with higher amounts.

“This will also create pressure on increasing the quality since the money will go to the best-quality projects,” Králiková said, adding that the funds APVV currently redistributes are low.

APVV supports various projects linked to basic research and applied research and development, as well as those of the international bilateral scientific and technical cooperation and projects financed by EU funds. They pertain to various fields, from natural sciences, through technical, medical, agricultural and social sciences, to human sciences. It also contributes to establishing new contacts that can “increase the participation of Slovak scientists and researchers in the European scientific area”, Alena Bokrošová from APVV told The Slovak Spectator.

The ministry plans to increase the funds into research to 1.2 percent of GDP by 2020, according to the Strategy of Research and Innovation for Intelligent Specialisation of Slovakia. Within this support, it also plans to significantly increase the private finances that should cover two-thirds of expenditures on research and development in Slovakia, Dupaľová Ksenzsighová said.

Slovakia will be also able to use EU funds. It will receive together €2.2 billion for the Operational Programme Research and Innovations in the following 2014-20 programming period to support research, technological development and innovations, up from €1.2 billion allocated for the previous seven years.

It will focus on completing the research and innovation infrastructure, and on supporting the cooperation and synergies between universities, SAV, research institutions and businesses in order to remove the existing technological gap, according to the partner agreement between Slovakia and the EU the government approved in June 2014.

Majková says that the current state of science can be changed only gradually.

“First of all, it is necessary to create stable research environment, which means introducing stable and effective financing, joint evaluation of all research subjects and taking the results into consideration when [deciding over] institutional financing,” Majková added. “Except for this it is also necessary to support tools to get young talented researchers.”

“WE ARE on the comet,” exclaimed scientists and engineers in European Space Operations Centre located in German town Darmstadt, which serves as the main mission control centre for the European Space Agency (ESA), when the Rosetta spacecraft parked near Comet 67P/Churyumov-Gerasimenko in early August. It had been travelling to the comet for 10 years, five months and four days.

The project of the whole mission, which cost more than €1 billion, was also attended by Slovaks. Experts from the Slovak Academy of Sciences (SAV) helped construct an Electrical Support System (ESS) that secures communication between the orbiter and the lander, and also the separation of the lander from the orbiter. When being connected, the communication is secured via a special cable. After they are separated, they will communicate with a radio system which will work similarly to the internet, Ján Baláž from the Institute of the Experimental Physics of the SAV told the Pravda daily in January.

The system, made in cooperation with Irish STIL company, is considered one of the critical systems of the spacecraft.

“Therefore it was made from the best quality components under strict technological conditions and is double-backed,” Baláž said, as quoted by Pravda.

When describing how they started cooperation on the Rosetta project, Baláž said that Slovakia participated as a subcontractor in 2000 and 2001, i.e. at the time the country was not officially cooperating with ESA. Since they had worked on several projects with STIL, they were also asked to attend the Rosetta project.

“For us, it was an honour to contribute to such a prestigious ESA mission,” Baláž told Pravda. “A transfer of technological experience and know-how to our workplace based on ESA standards was also valuable.”

The spacecraft is now expected to closely survey the comet. It should create a map and scientists and engineers will then choose a place where the Philae lander will land in November to make further analysis. The Experimental Physics branch of SAV workplace will not, however, contribute to these analyses since it only contributed to the project’s technological part, Baláž explained.