LINES in front of Bratislava’s Office of the Border and Alien Police were so long in late September that people would arrive a full 15 hours before business hours – some sleeping on the street. 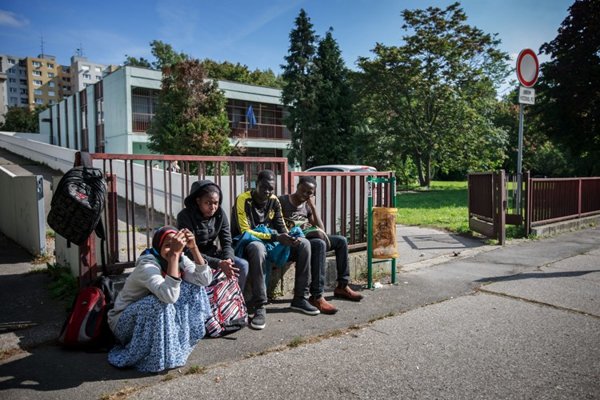 LINES in front of Bratislava’s Office of the Border and Alien Police were so long in late September that people would arrive a full 15 hours before business hours – some sleeping on the street.

“I do not think it is normal to wait here for such a long time,” Sawinee, a woman from Thailand living in Slovakia, told the public broadcaster STV on September 29. “We have to go to work and we cannot afford to spend such amounts of time here.”

Moreover, foreigners complain that students sometimes come early to wait for appointment tickets issued by the office and then sell them for around €80, and claim that even police officers sell the tickets, according to the Sme daily.

“The police noticed significantly earlier coming of stránky [the name for foreigners with requests] before the beginning of working time in the last days of September,” police spokeswoman Denisa Baloghová told The Slovak Spectator. “The reason was an increased number of requests for residence mainly due to study, business or family connection.”

In the past, people arrived just one hour before the office opened, according to Interior Minister Robert Kaliňák, the Sme daily reported on September 30.

“When they now come at midnight to [reach the officers] at 8:00, it almost resembles waiting for an iPhone,” Kaliňák said, as quoted by Sme.

In few days, the situation has improved: the office extended its business hours and on the morning of October 3 around 60 persons took the queue ticket while in previous days it was more than 100, according to Baloghová.

The states of alien police office drew the attention even of Ombudswoman Jana Dubovcová, who with her staffers visited the office in Bratislava on October 6. Dubovcová currently scrutinizes the conditions for permitting stays in Slovakia at all branches of the Alien police in Slovakia, according to Sme daily.

The first foreigner who wanted to visit the office opening on Monday, September 29 at 7:30 came to its doors on Sunday at around 16:30. By 1:00 some 49 people were waiting. Some of them chatted in groups, others slept outside of the office in tents, sleeping bags or just on the ground under a blanket.

The foreigners’ police office is currently able to handle only 50 people in a single day which is allegedly due to having to train and instruct new officers. In the past, the office handled 150 people a day and the queues were not as bad, said one of the foreigners in front of the office, according to Sme.

“We have always been coming here at 5:00, 4:00 at the earliest, and we were the first here,” Akmal Khudoynazarov, a student from Uzbekistan, told Sme.

To avoid arguments, foreigners created a list of names of people who came to the office. The order was however unofficial. Not everyone respected it and conflicts about the queue emerged. Some foreigners who came in the morning did not understand that people had been waiting all night.

However, foreigners are not the only ones who wait in queue at the office. There are allegedly also students, businessmen or even police officers on the scene trading in numbered tickets that give those waiting a place in line.

“I reported it to the police officers but they told me that what happens outside is our problem,” said a man carrying the names list, as quoted by Sme.

Kaliňák responded that the police have no control over what happens outside their premises. Police also denied claims about police officers trading with tickets and stated that it had not noticed any cases of fabricated tickets, according to Sme.

A few days later, after media covered the issue, Sme reported police officers who checked people waiting in queue and provide them with information that situation had improved and that they do not have to sleep in front of the office.

“They [police officers] are there even to prevent possible trading with tickets,” Baloghová told Sme, “which we have not uncovered so far.”

Dealing with the alien police and waiting in queues is business for some agencies which help foreigners with necessary documents for a fee. Their employees even stand in the queue instead of foreigners if it is needed.

“Since they [foreigners] are busy in their firms they come here just to replace my people who stand in queue instead of them,” Beáta Kozmová from one of such agencies said, as quoted by STV. “I cannot imagine that some director of a big company would stand here in the queue at midnight.”

The reward for an agency which obtains, for example, all documents for businessmen from third countries reaches the sum of €1,000, according to STV.

Foreigners, however, point out that not all of the business activities in the alien police office are legal.

“The black market is running here,” Ibrahim, a Kurdish man living in Slovakia said, as quoted by the Aktualne.sk news website on September 29. “Those are mostly law firms which arrange residence for foreigners. Every nationality has its own person here who deals with it, who makes things easier.”

To deal with current situation, the office, which is normally opened only on Mondays, Wednesdays and Fridays, has since added business hours on Tuesdays and prolonged them on Wednesdays and Fridays. At the same time it increased the number of counters by two and extended activities of some counters, according to police.

As it was before, the head of the office’s shift communicates with persons who did not make it to the counter and deal with individual cases which cannot be delayed to the next business day according to Baloghová.

She added that pressure from students requesting temporary stay has been reduced since the school year has already started and the number of requests decreased.

“Today we can say that the situation in the department has stabilised,” Baloghová said. “Despite that, we prolonged business days and hours, police officers stay at work until the late evening hours (they did that even before business hours prolonged) to deal with [requests of] all clients or to deal with [their requests] right on the next day.”