BLAF is no bluff

THERE are several festivals taking place this autumn in the Slovak capital: musical, fashion, architectural and gastronomical ones. But on October 2-5, there was a special one: the Bratislava Art Festival, or BLAF for short. 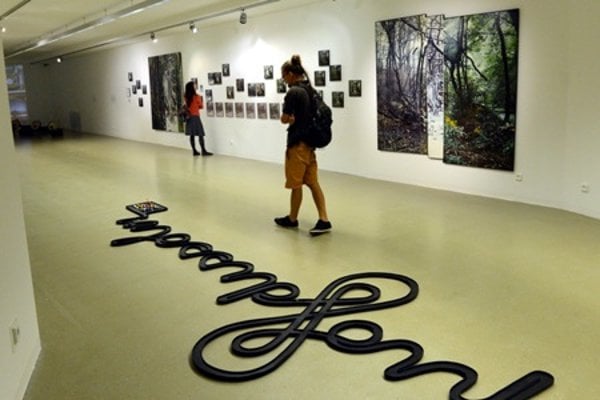 THERE are several festivals taking place this autumn in the Slovak capital: musical, fashion, architectural and gastronomical ones. But on October 2-5, there was a special one: the Bratislava Art Festival, or BLAF for short.

This one strives to bring to museums and galleries people who normally do not venture there, especially locals who do not have the time or energy to tour local art venues. The focal question posed to the heads of galleries and art centres was “Is art for the masses?” and the answers were rather inclined to be positive, adding, however, that the masses might need some help in getting acquainted, understanding and accepting art as something meant also for them.

Beginning in October, many art venues in Bratislava opened their doors, offering lectures, guided tours, tours with artists, workshops, special receptions and debates (unfortunately, only in Slovak). However, sometimes it was enough that they opened doors also at unusual hours and guaranteed free entry and a leaflet of the catalogue also in English.

Apart from big museums and galleries, like the Slovak National Gallery, the Bratislava City Gallery, the private Nedbalka Gallery, the Slovak Design Centre and its satellite venue, Umelka, or the recently opened Kunsthalle, also smaller venues participated in BLAF.

Nedbalka contributed with workshops, a lecture on special architecture and design, on its temporary exhibition “Ferdinand Hložník”, renowned Slovak artist, and commented tours on modern Slovak art, explaining its permanent (though periodically changing) exhibition. On the ground floor, Nedbalka always has one temporary exhibition of modern Slovak artists, while on the remaining four floors, the history of Slovak art from the turn of the 19th-20th century to present day is presented. The appropriately long commented tour on October 4 helped visitors understand the main streams and periods, to grasp the crucial artists and their works, and also to understand that there are more works in the gallery’s deposit, and so they are rotated in periods of several months.

In Kunsthalle, the commented tours by two main curators of the current exhibition “Paradox 90”, Juraj Čarný and Richard Gregor were even more helpful, as the exhibition tries to explain and revive eight curatorial concepts of the 1990s, as well as this period itself, with its political and social connotations that had an unquestionable impact on the period of art. The presence of two curators on October 5 who complemented each other made the tour funnier and more comprehensive, but also more lengthy.

Those who missed the opportunity offered by the 5th year of BLAF can look forward to the next edition – and make plans in their calendar to keep one weekend in October free for absorbing Slovak art in its concentrated form. And in some cases, they may even hope for tours or lectures in English. Otherwise, they can look for help in catalogues that are most often made bilingual.