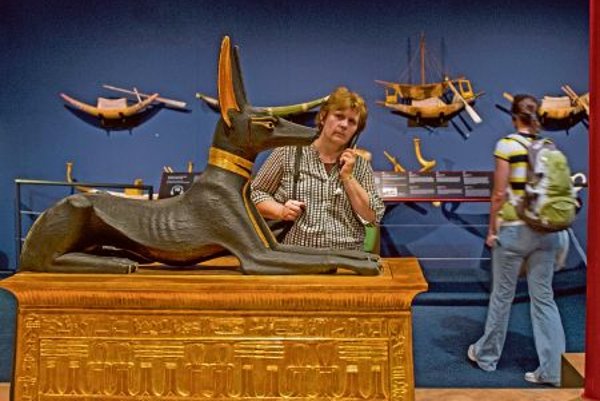 Bratislava
EXHIBITION: TUTANCHAMON - Jeho hrobka a poklady / Tutankhamun – His Tomb and Treasures is an exhibition that offers accurate replicas of artefacts from the tomb of the pharaoh in a way closest to the form in which the tomb’s discoverer, Howard Carter, found it almost 100 years ago. There are no display cases, which contributes to the authentic atmosphere. The exhibition can be seen daily between 9:00 and 19:00 until November 30 in the Incheba Expo Arena at Viedenská Cesta 3 in Bratislava; tickets cost €9-€16 and can be bought through www.ticketportal.sk. More information is at www.tut-vystava.sk.

Bratislava
FILMS: In mid October, not only movies within the Week of Chinese Films will be screened with English subtitles, but also two other movies: French, Nobody Likes Me by Francois Truffaut and Slovak, Step into Darkness by Miloslav Luther.
Starts: Oct 13-17 (various times); Lumiére cinema, Špitálska 4. Admission: €3-€4. More info: www.aic.sk/kino-lumiere.

Bratislava
EXHIBITION: Multipoint – Works of Slovak and foreign artists made during the creative symposium Multipoint in Nitra are presented in the SPP Gallery, offering an insight into the meeting of various different cultures and traditions.
Open: weekdays 12:00-17:00 until Oct 31; SPP Gallery, Mlynské Nivy 44/C. Admission: free. Tel: 02/6262-4203; www.spp.sk/kontakt/kontakt-galeria-spp.

Banská Bystrica
FESTIVAL: DNI tanca pre vás / Days of Dance for You is the education part of the festival of contemporary dance (Dni tanca / Days of Dance) organised by the Divadlo štúdio tanca / Theatre Studio of Dance originally annually and from this year biennially. Dni tanca pre vás should boost the continuity and help educate students of conservatories and secondary performing art schools by offering workshops, performances of DŠT, lectures and analyses. It takes place between October 13 and 18 in the DŠT venue, Na Kačici, Komenského 12 in Banská Bystrica. Tickets for the performances cost €3-€5; more information can be obtained at 048/4146-540 or www.studiotanca.sk.

Banská Bystrica
OPERA: Pietro Mascagni – Priateľ Fritz / L’Amico Fritz – The opera of Italian composer Mascagni, which was successful following its opening in 1891, but has gradually been losing popularity, is being premiered in the local opera house, as conducted by Marián Vach and directed by Dana Dinková.
Starts: Oct 17, 18:30; State Opera, Národná 11. Admission: €10. Tel: 048/2457-123 or www.stateopera.sk.

Košice
OPERETTA: Emmerich Kál-mán - Grófka Marica – Countess Marica (or Gräfin Mariza, in German) is the first opere-tta to be staged at the State Theatre Košice after more than six years, and this title, one of the most popular works of Hungarian composer Kál-mán, returns after 40 years; it is conducted by Igor Dohovič and directed by Czech Dagmar Hlubková.
Starts: Oct 17, 19:00; State Theatre Košice, historical bui-lding, Hlavná 58. Admission: €4-€12. Tel: 055/2452-269, -260; www.sdke.sk.